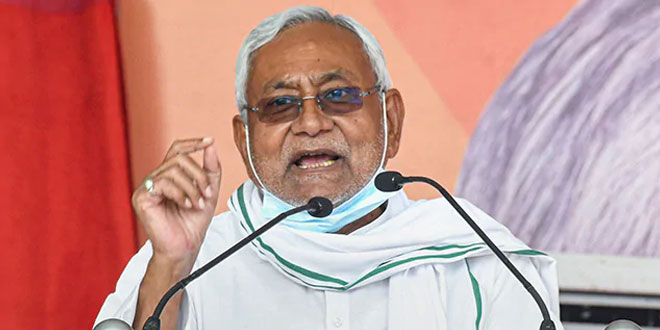 Patna: Amid surge in coronavirus cases in some states in past few days, Chief Minister Nitish Kumar on Monday (March 22) cautioned people of Bihar to remain alert and cautious, and suggested them to avoid congregating in large numbers or celebrating Holi publicly. Mr. Kumar said this while participating via video conferencing at 109th “Bihar Diwas” programme being organised at Gyan Bhawan here in the state capital. “I have already held meeting with DMs and SPs where everything was discussed in detail. It is Holi festival time. The officials need to urge the people with folded hands not to publicly celebrate the festival, Mr. Kumar said.

Also Read: Bihar Reports A Decline In Infant And Child Mortality Rate But Rise In Prevalence Of Anaemia Causes Worry

We will be able to check the spread of the disease if it (Holi) is not celebrated in large gatherings or at public places, he said in humble appeal to the citizens. It has been witnessed that number of COVID-19 cases has started increasing in several countries and also in other states of the country.

It is our job to make the people aware and alert (of the situation) I will urge the people of the state to remain alert and cautious, Mr. Kumar said.

Stating that eight states have showed an uptick in the daily new COVID-19 cases, Kumar said that look at Maharashtra, the number of cases in that state has increased to the level which was probably not even witnessed in the past when the disease was at its peak.

Notably, Maharashtra, Punjab, Karnataka, Gujarat and Madhya Pradesh have reported a surge in the COVID-19 daily cases and accounted for 80.5 per cent of the total new cases registered, the Union Health Ministry said Monday. Maharashtra has reported the highest daily new cases at30,535 (65.03 per cent).

This is followed by Punjab with 2,644while Kerala reported 1,875 new cases. Observing that though Bihar has low coronavirus caseload and mortality so far, Kumar said the number of COVID-19 cases has started rising in the state too which is evident from the fact that the active cases used to hover below 300 earlier have now gone up to above 500.

As per the health department’s bulletin issued on Monday evening on its social networking, the number of active cases was 522 while 126 new cases were detected whereas 74 persons were recovered in past 24 hours. The states recovery rate was 99.21 per cent, it said adding that 2,61,487 people have recovered from the contagion.

A Year On From Lockdown, India Reports Worst Day For COVID-19 In Months