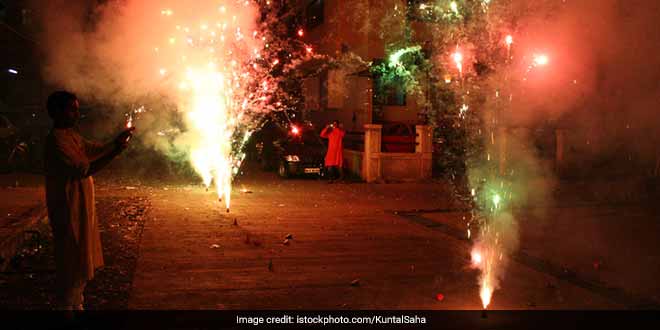 New Delhi: Backing the one-day old Supreme Court (SC) order, Maharashtra Environment Minister Ramdas Kadam today said that the state may also put a ban on sale of firecrackers ahead of Diwali which falls on October 19 this year. Mr Kadam said that he will soon chair a meeting with Chief Minister Devendra Fadnavis and put forward a proposal to ban crackers in light of the poor air quality prevailing in the state. During a function organised for school students, Chief Minister Fadnavis along with Mr Kamdar, State Water minister Girish Mahajan, state ministers Vinod Tawde and Jaykumar Rawal took an oath for a pollution-free Diwali.

I welcome the Supreme Court’s decision to ban crackers in Delhi. For the sake of people of Maharashtra and to improve the air quality, I will request the chief minister to bring in a similar ban, the Minister said at a function organised under a pollution-free Diwali Abhiyan.

“I welcome the Supreme Court’s decision to ban crackers in Delhi. For the sake of people of Maharashtra and to improve the air quality, I will request the Chief Minister to bring in a similar ban,” the minister said at a function organised under a pollution-free Diwali Abhiyan.

The announcement if put into effect by the state will certainly improve the air quality index (AQI) in several cities of the state. A 2015 report by Maharashtra Pollution Control Board (MPCB) listed the AQI of 4 cities- Mumbai, Pune, Solapur and Chandrapur as ‘Moderate’ and ‘Poor’ which if simplified means, ‘Breathing discomfort to the people with lung, heart disease, children and older adults’. The AQI of these cities fell in the bracket of 167-227 as against the prescribed limit of 0-50. Last year, the AQI in Mumbai was ranked ‘Poor’ (278) on the day of Diwali which turned ‘Very Poor’ (315) the very next day according to the readings collated by System for Air Quality Weather Forecasting and Research (SAFAR).

On October 9, the top court placed a ban sale of firecrackers in the Delhi-NCR region till November 1 after three infants had filed a writ petition to ban crackers as air pollution in the capital became a matter of national concern last year.

While the ban on crackers was widely welcomed on social media and by citizens of Delhi at large, shopkeepers and traders were upset with the SC’s decision as their businesses are likely to suffer huge losses just a few days ahead of the festival.

“Sales from Delhi-NCR amount to nearly Rs. 1,000 crore during the Diwali period. The court order will affect the sales badly as it comes right before Diwali. If other states also decide to ban the sale of firecrackers following the court order, it will have a severe effect on the profits we make during the festive season,” said Asai Thambi, President, Tamil Nadu Fireworks and Amorces Manufacturers Association.

The annual turnover of firecrackers in India is approximately Rs 7,000 crore. While nearly 3,00,000 people are directly employed in the manufacturing of crackers, about 5,00,000 are employed in packaging, printing and other related fields.

Littering Starts With Us, Spoiling Of Our Environment Starts From Us, It Is High Time We Own Up And Take Responsibility: Afroz Shah