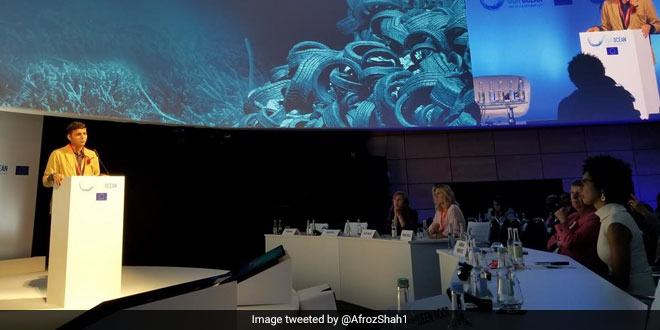 New Delhi: ‘If we were saving the oceans the way we are protecting our premises and assets, then there will be no need for such conferences where we discuss about marine litter,” says 36-year-old lawyer from Bombay High Court, Afroz Shah at the European Union-backed ‘Our Ocean’ conference held in Malta. The main aim of the conference was to give a push for commitments to reduce marine pollution, manage aquatic resources and mitigate climate change.

In Pics: How Removal Of 7.4 Million Kilograms Of Garbage Made Versova The Cleanest Beach Of Mumbai

Speaking at the conference, the beach warrior, known for the world’s biggest cleanup at Versova Beach said, “There are thousands of laws to protect the environment not only in India, but, in every country. But, what we see on ground level gives us a different picture.”

@AfrozShah1 is on a date with #OurOcean & leads a gigantic community beach cleanup in Versova beach. Don't wait for laws, start picking up pic.twitter.com/fdQDy0EoKQ

He further added, as an individual we think of waiting for the authorities and laws, I say, if we need to fight marine pollution or simply our waste woes, then, it has to become yours and my personal journey. Then only the dream of a clean and healthy nation will be fulfilled.

Talking in numbers, approximately nine billion tonnes of plastic has been produced since 1950 with most of it being discarded in landfills or the environment straightaway. According to a 2014 study published in a Public Library of Science journal, there are more than 5 trillion pieces of plastic floating in the world’s oceans. And the scary part is the world seems to recycle a mere 10 per cent of plastic.

.@AfrozShah1 telling us like it is: we are destroying #OurOcean. Do something! Protect the oceans like we protect premises and airports pic.twitter.com/qoGYvIhqV0

Experts say if current trends continue then more than 13 billion tonnes of plastic waste will end up in the environment or landfills by 2050.

Highlighting the point that even the manufacturers should take responsibility of packaging products in plastic sheet, Afroz added, your houses are being run well, but, think about the houses of Marine species, the habitat you are destroying. It is time to take responsibility for your food and drink packaging.

Afroz Shah was not alone; heads of government and senior officials from more than 60 countries came together last week to talk about this most important, yet, neglected issue – marine litter. The ‘Our Ocean’ conferences have been taking place annually since 2014 with an agenda to bring together world leaders and discuss about the growing ocean litter problem and the ways it can be tackled.

This year through “Our Ocean 2017” conference, the European Union has pledged 550 million euros ($645 million) to support a slew of measures to improve ocean health, including plastic waste reduction and boosting marine research.