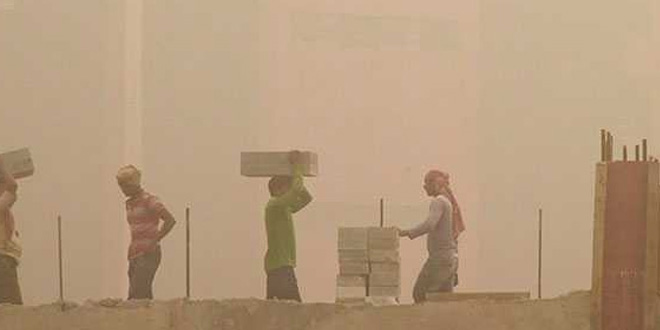 It is a winter tradition that remains intact, an annual crisis. Just at the onset of winter Delhi is gripped by smog that is a deadly cocktail of nitrogen oxides, sulphur oxides, ozone and smoke. Every year a new record is set and previous records broken. This year’s high so far is an Air Quality Index of 486, beating the previous year’s high of 435. To put these numbers in context, the safe Air quality index specified by World Health Organisation (WHO) is 0 to 50. So Delhi lives dangerously and breathes in toxins 10 times above the safe levels. But what is wrong with Delhi’s air and why does it take a turn for the worse in winters? Who are the biggest culprits responsible for the Delhi’s toxic air? 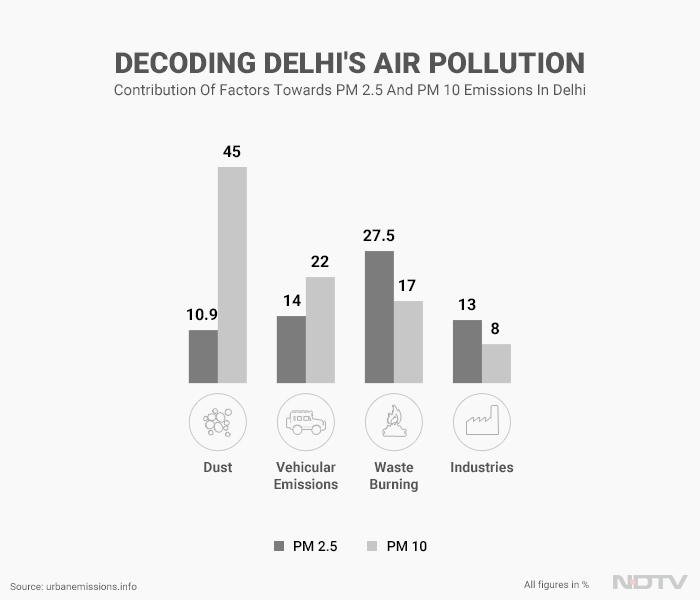 Here is a detailed look at the Top 3 biggest contributors to Delhi’s air pollution:

With over one crore registered vehicles in the capital alone, Delhi’s vehicular emissions are a major reason for the poor air quality in the state. Reports from both the Central Pollution Control Board and Environmental Pollution – Prevention and Control (EPCA) show the alarming rise in the number of vehicles in the city in the past few years. Out of the one crore vehicles in Delhi, 66 lakh are two-wheelers, which are major air polluters that is whopping 66% and these large chunk of the vehicular population is exempt from the Odd-Even schemes that are implemented during pollution crisis phase to regulate traffic on the roads.

In 1998, the Supreme Court ordered implementation of Compressed Natural Gas (CNG) for public transport vehicles -buses, autorickshaws and taxis, instead of diesel by 2002. It was the year that recorded the highest emissions for particulate matter (PM) 2.5, a high risk pollutant. Over 22,000 tons of PM 2.5 was emitted in 1998, the highest in Delhi in decades. Together with the implementation of CNG, Delhi government by 2000 had also began advocating the use of unleaded petrol and diesel with low sulphur levels. The efforts had an impact, PM 2.5 emissions by 2014 had halved and came down to 10,000 tons.

So why is vehicular emission still a concern in Delhi? Because though the emission of sulphur dioxide came down, unabashed entry of diesel led trucks from neighbouring states resulted in an increase in the emission levels of nitrogen dioxide and ozone, two particularly dangerous pollutants. Thus the gains from imposition of CNG were reversed due to the continuous emissions of other hazardous gases.

Vehicular emissions have always been unregulated in Delhi. The Supreme Court order which made buses and autorickshaws switch to CNG by 2002 has had no long-term effect as two-wheelers and heavy vehicles continue to operate on diesel and the increase in the number of these two has negated the CNG effect, said Mahesh Chandra Mehta, Environmental Lawyer who filed a petition in 1996 for Delhi’s air quality improvement.

A 2016 study conducted by Indian Institute of Technology, Kanpur confirmed that vehicular emissions account for about 9 per cent of PM 2.5 emissions and 45 per cent of PM 10 emissions in Delhi, both significant figures. As another round of smog clouds the skies of Delhi, now maybe a good time to think about bringing in long term vehicular emission regulations than the temporary moves like Odd-Even which in any case exempts two-wheelers.

Road dust is the biggest culprit as far as pollution in Delhi is concerned. A concrete definition of road dust is difficult to come up with, but the Central Pollution Control Board (CPCB) defines it as a hazardous mix of metals such as copper, zinc, manganese and nickel. The metal particles are heavy in nature and remain floated in the air and enter the respiratory system via lungs. Ill-maintained roads and heavy traffic are the primary reasons responsible for road dust to assume such killer proportions in Delhi. With more than 22,000 kilometres of the busiest roads in Delhi, road dust is a problem that so far authorities are failing to grasp and deal with.

While stubble burning receives all the blame during this time of the year, road dust is the biggest contributor to Delhi’s pollution, About 38 per cent of PM 2.5 emissions in Delhi are caused by road dust. Badly maintained roads, on which vehicles have been running for years, cause road dust to formulate, and heavy pollutants from vehicles suspends them in the air, said Dr Mukesh Sharma from IIT Kanpur.

Road dust in Delhi is duly accompanied by construction dust from Delhi’s numerous and unending constructions (like flyovers and Metro), which make up for about 10 per cent of PM 10 emissions in Delhi. Delhi generates around 5,000 metric tonnes of construction waste daily, only 20 per cent of which goes for processing. The dust evolving out of construction debris is highly hazardous, often entering the bloodstream via heart and lungs and can cause severe respiratory and cardiovascular diseases.

If road dust and vehicular emission weren’t enough, garbage burning poses an additional threat to the Delhi air. Waste burning is still consistent and continuous in many parts of Delhi, especially in the areas under the watch of East Delhi Municipal Corporation (EDMC). Despite a National Green Tribunal (NGT) ban on waste burning since December 2016, little heed has been paid towards following it. In Delhi, waste burning contributes to a massive 17 to 18 per cent towards the emission of PM 10 and produces the severely hazardous dioxins. Attempts to rein in waste burning in Delhi-NCR have not yielded desired results yet and instances of waste burning were visible this year as well. On October 23 this year, residents of Gurugram complained of choking and polluted air as waste continued to be burnt in a vacant land.

Around 18 per cent of Delhi’s PM levels are due to open burning of waste. Diwali onwards, the amount of garbage generated also goes up significantly by 2,000 to 3,000 tonnes. A lot of it is burnt in winter for disposal purposes, or by the homeless as a source of fire. This causes significant amounts of air pollution during the winter months. We have already placed a fine of Rs 5,000 on open air garbage burning, said Vivek Pandey, Additional Commissioner, East Delhi Municipal Corporation.

Unlike stubble burning which needs involvement of other states and Central government, vehicular emissions, construction dust and garbage burning are within Delhi’s mandate to control. These three can be dealt with immediately and long term solutions put in place, rather than temporary efforts like Odd-Even when the crisis hits.

Solutions are in place and there have been several recommendations from authorities like the Central Pollution Control Board, Ministry of Environment, Delhi Development Authority etc. But their implementation requires all the concerned stakeholders to come together and implement them throughout the year and not just a week or a month before Diwali or winter. Only then can air pollution be curbed, said Dr Sarath Guttikunda, Founder Director, Urban Emissions.info, a research think tank working on urban air pollution.

A 2016 report by the Central Pollution Control Board and the Ministry of Environment and Forests, titled ‘Air Pollution in Delhi – An Analysis’ put forward a few suggestions, which if implemented, can have long-term effects on Delhi. Some of the suggestions put forward by the report are as follows:

As Delhi Pollution Outstrips Beijing, Government Brings Back Odd-Even, Here’s What Experts Have To Say

Severe Level Of Pollution In Delhi Raises Number Of Patients