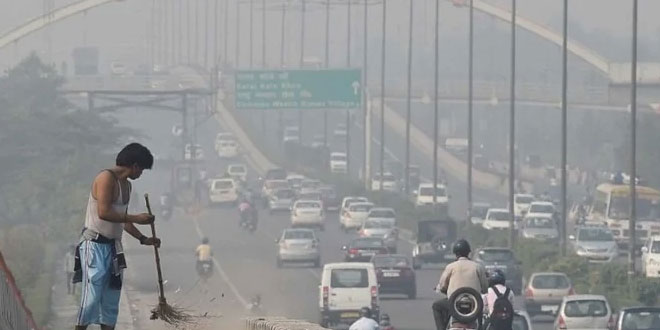 New Delhi: The Delhi government may have deregistered 40 lakh old vehicles to curb pollution in the national capital but the enforcement data shows a dismal picture with only 3,196 (.079 per cent) such vehicles impounded by agencies after they were banned by the NGT in 2014. Two different agencies are responsible for enforcing the ban on 15-year old petrol vehicles and 10-year old diesel vehicles imposed by the National Green Tribunal in 2014 and Delhi traffic police and transport department of the Delhi government. The ban was ratified by the Supreme Court.
The data provided under the Right to Information Act to an activist, Deepak Juneja, shows only 3,196 such vehicles have been impounded since 2014 by both agencies which is just .079 per cent of the total 40 lakh vehicles.

The Delhi government transport department data provided under the RTI paints even a grimmer picture as it has been able to impound only 106 old vehicles since the NGT banned them in 2014, till August 31, 2018. After NGT had banned old vehicles in the capital, Delhi police mandarins have been issuing circular to impose the ban and take strict action against the erring vehicle owners but the data shows hardly any progress on the ground.

The registration numbers of the petrol vehicles which are 15 year old and diesel ones which are 10 year old have been “deemed to have been de-registered”. They have been fed in mobile challan system of the Delhi police which flash as and when their numbers are entered in hand-held devices by traffic officers.

Vehicular pollution is a major contributor to dangerous air quality in New Delhi which is claiming over 10,000 deaths annually, according to a study. Nearly 15,000 people died prematurely in Delhi due to pollution by fine particulate matter in 2016, one of the major emissions from diesel vehicles, according to a study this year, which ranked the national capital third in a list of cities reporting most deaths due to air pollution.

The Bharat stage emission standards are standards instituted by the government to regulate output of air pollutants from motor vehicles. The Bharat Stage VI (or BS-VI) emission norm would come into force from April 1, 2020 across the country. Ms. Roychowdhury said emission profile of all vintage cars show that a 10-year-old diesel mid-size car or SUV that meets BS-II and BS-III standards emits 7.5 times higher toxic particulate matter compared to the current BS-IV diesel vehicles.

Ms. Roychowdhury said even deeper worry is that diesel emissions are Class-I carcinogens, according to the WHO, for strong link with lung cancer.

The International Council of Clean Transportation has further estimated based on this that there is four times greater cancer risk in Delhi from diesel vehicles compared to petrol vehicles. It estimates the potential to be more than 280,000 avoidable cancers due to long term exposure to diesel exhaust, she said.

The air quality has been in the red zone in Delhi several times during the past decade, with the NGT and the SC repeatedly asking the state and the Centre to act against erring contributors to pollution.

Last week, a Supreme Court bench headed by Justice Madan B Lokur expressed displeasure that orders passed by the NGT and the Supreme Court in 2015, prohibiting the plying of such old vehicles in the National Capital Region, had not yet been complied with.

Three and a half years have gone by but it appears that orders passed by the NGT and confirmed by this court are not being complied with yet. The counsel for Delhi government has been asked to advise his client to act with promptitude, the bench had said.

The apex court on October 29 directed the transport department to announce that plying of 15-year-old petrol and 10-year-old diesel vehicles in the NCR has been banned and such vehicles would be impounded if found plying.

The court had termed “very critical” the prevailing situation of pollution in NCR and had permitted the court-mandated EPCA to take pre-emptive steps under the Graded Response Action Plan (GRAP) without strict adherence to pollution stages delineated in the plan.