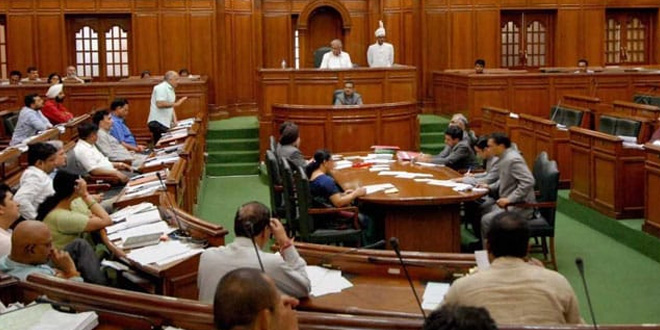 New Delhi: The Delhi Assembly passed a Rs 65,000-crore budget for the 2020-21 financial year on Monday, with an emphasis on the education, health and transport sectors. In the budget presented in the House by Deputy Chief Minister Manish Sisodia, the Aam Aadmi Party (AAP) government set aside Rs 50 crore to deal with the coronavirus outbreak. Presenting the budget for the sixth consecutive time in the Assembly, Mr. Sisodia said the Delhi government will implement the Ayushman Bharat Yojana of the Centre in the national capital.

Mr. Sisodia, who also holds the finance portfolio, said the per capita income of Delhi had increased by 44 per cent over the last five years. The budget focussed on the education and health sectors, which the deputy chief minister said were important areas in the Kejriwal model of governance.

Presenting the budget in the presence of Chief Minister Arvind Kejriwal, Mr. Sisodia said digital classrooms will be set up in each government school and an amount of Rs 100 crore was set aside for the purpose. The deputy chief minister, who also holds the education portfolio, proposed 145 new schools of excellence in the budget.

By 2024, we will establish Delhi on the world’s education map, he asserted.

Also Read: Coronavirus Outbreak: Cases Rise To 415; Most Of India Under Lockdown To Tackle COVID-19

The health sector was allocated Rs 7,704 crore for the next financial year. The government set aside Rs 724 crore for new hospitals and Rs 365 crore for setting up new mohalla clinics and polyclinics.

Mr. Sisodia said the Kejriwal model of governance was centred around elements of economics and people’s welfare, pointing towards empowerment of women through free rides in public transport buses.

The free-bus-ride scheme for women will continue in the next financial year, he added. The budget allocated Rs 1,700 crore for providing basic facilities in the unauthorised colonies of the national capital.

Under the Kejriwal model of governance, the chief minister has guaranteed the largest and cheapest public transport system in Delhi. Under this, the government has a target to have a fleet of 11,000 buses and to lay metro lines for 500 kms, Mr. Sisodia said.

In view of a land crunch, the government will convert its four bus depots into multi-storey buildings to accommodate more buses, he added.

The Delhi government also said it has set a target to reduce air pollution in the city by two-thirds in the next five years and set aside Rs 30 crore in the 2020-21 budget to install smog towers across the national capital. “Green Citizen Awards” will also be instituted to encourage citizens to contribute to environment protection and preservation work, Deputy Chief Minister Manish Sisodia said while presenting the budget in Delhi Assembly.

Keeping the air of Delhi clean and making Delhi green is one of 10 guarantees of Chief Minister Arvind Kejriwal. Due to various efforts, air pollution was reduced by 25 per cent in the last five years. Our goal is to reduce it by two-thirds in the next five years. There is also a need to implement projects to establish smog towers to reduce pollution on a large scale. I propose an outlay of Rs 30 crore under the Pollution Control and Environment Management scheme to control air pollution in Delhi, said Mr. Sisodia.

Experts have questioned the feasibility of smog towers, saying they are not suitable to Delhi’s meteorological conditions. Several environment experts had earlier written to the Supreme Court, requesting directions not to allow government agencies to install smog towers on grounds of ineffectiveness and calling them a “waste of public money”.

The government also proposed a new scheme, Deployment of Marshals, in the environment department with an outlay of Rs 2 crore for equipping the district administration with a dedicated workforce.

It has allocated Rs 20 crore for carrying out intensive campaigns across Delhi to create awareness and encourage public participation to protect the environment.

This is for segregation of waste at home, avoiding single-use plastic, rooftop plantation, gifting plants instead of offering bouquets, use of public transportation and car pooling, cycling for short distance, using jute and cloth bags, preventing waste of paper, to celebrate in eco-friendly ways and holding conferences on environmental issues, etc, Mr. Sisodia said.

In order to achieve the target of planting 2 crore saplings in the next five years, a target has been set for planting of 40 lakh saplings by 22 green agencies in the year 2020-21, he said

The budget presentation lasted for around an hour and a half, during which all members maintained a distance with each other by leaving the seats between them empty. Earlier, the five-day budget session was cut short to a daylong session in view of the coronavirus outbreak.

Are Masks Effective To Contain The Spread Of Novel Coronavirus?

Coronavirus Outbreak: Cases Rise To 415; Most Of India Under Lockdown To Tackle COVID-19