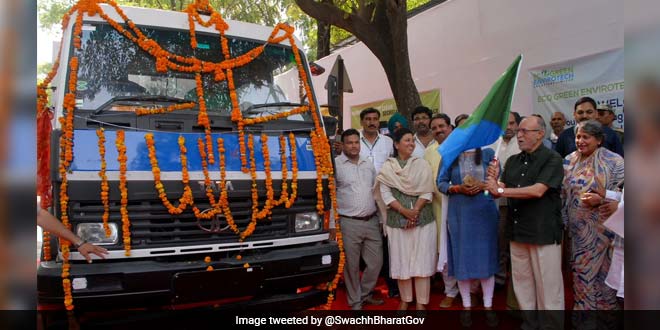 New Delhi: Lieutenant Governor Anil Baijal on June 4 flagged off a fleet of garbage collection vehicles of the South Delhi Municipal Corporation (SDMC) and praised the civic body saying there was a “vibrant mood” due to the initiatives taken by it.

The Lieutenant Governor expressed satisfaction that the new vehicles comprising mobile transfer stations (MTSs) and auto- tippers were flagged off on the eve of World Environment Day, signifying awareness towards improved sanitation and cleanliness.

“The new advanced mechanical infrastructure will result in Rs 461 crore in savings in the west and south zones of SDMC over a period of eight years,” he said.

South Delhi Commissioner Punit Goel said the civic body had undertaken the first ever project of collecting and managing garbage, in lines with the Solid Waste Management Rules, 2016.

The new set up will enforce a complete check over open- dumping, waste-burning, waste spillage during transportation and will also ensure that there is no manual handling of the waste, he said.

The infrastructure is “less expensive” than the existing one and will be able to manage 2,700 metric tonnes (MT)of waste per day, in comparison with the 1,700 MT now.

South Delhi Mayor Kamaljeet Sherawat said the move would benefit around 19 lakh residents in 29 wards of the west zone, which generates a total solid waste of 855 MT per day.

Also Read: World Environment Day: Delhi Will Initiate Collection Of Segregated Trash From June 5, But Will It Achieve The Waste Treatment Target?

Non-Compostable Sanitary Waste Is A Huge Threat To Health And Environment: Experts