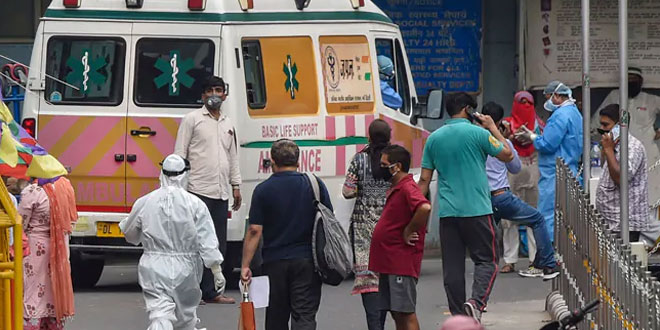 New Delhi: The national capital’s COVID-19 count crossed the grim one lakh milestone this week but the number of active cases is dipping as is the positivity rate while the recovery rate is going up, raising hopes of the epidemic curve flattening if the trends continue.  As testing is significantly ramped up, the death rate, too, has fallen marginally and the projected explosion of cases hasn’t happened. The signs are undoubtedly good but these are just baby steps as Delhi moves ahead in its fight against the COVID-19 pandemic, cautioned experts.

It is early days yet, they said, stressing the urgent need to continue with social distancing, masks, hand hygiene and other dos and don’ts to ward off the infection. Lowering the guard could lead to cases surging again.

“We can say the curve seems to be flattening, though this virus is novel and can spring a surprise,” a senior doctor at the frontline of the fight in a private hospital said on the condition of anonymity.

The dip in cases is encouraging but it would be prudent to have multiple data points created over the next two weeks to better map the trends and to be able to say the curve has flattened. In order to draw an inference about effective containment, the decline that is being observed has to be sustained over a period of time, added Dr Samiran Panda, Head of Indian Council of Medical Research’s (ICMR) Epidemiology and Communicable Division.

Several experts are encouraged by the trend of average fresh cases per day and the slide in positivity rate over the last fortnight. On March 1, the city recorded its first COVID-19 case. More than three months later, the number of cases is 1,07,051 with 3,258 fatalities, according to the Health Ministry on Friday.

The positivity rate in Delhi has been consistently going down as well – from 31 per cent in the June 8-14 week to 11 per cent in June 29-July 5 week, according to official figures.

So, from 3,947 peak cases so far on June 23, the average fresh cases in the last several consecutive days have shown a fall, hovering between 1,379 and 2,889. Also, the positivity rate has come down.  But we need both these metrics to come down over a sustained period of time, said the doctor at the private hospital.

“Things are looking up and data trends have been very encouraging,” said Mahesh Verma, Head of a panel set up by the Delhi government to strengthen the preparedness of hospitals to battle the coronavirus.  Mr Verma, a doctor and vice-chancellor of the Indraprastha University, also said recently that the COVID-19 tally in the city may not reach 5.5 lakh cases by July end.

Deputy Chief Minister Manish Sisodia had shared the 5.5 lakh figure with reporters last month. However, one needs to see how the virus behaves during the monsoon, Mr Verma added.  Working on the multiple tracks of home isolation, increased testing and wider public engagement may have done the trick for the Arvind Kejriwal-led government.  The number of tests has also gone up sharply – from 5,500 tests per day in the first week of June to 11,000 by mid-June and 21,000 by July.

“Till July 8, over 6.79 lakh tests have been done which translates into 35,780 tests per million population. Now every day over 20,000 tests are being done but in spite of the increase in tests, active cases are under control,” Mr Srivastava said.

While increased testing seemed to increase the number of cases, what it means is that COVID positive patients are now being traced and isolated in a timely manner, a Delhi government official explained.  So while cases escalated and breached the one lakh mark on July 6, active cases and positivity rate reduced and recovery rate increased, he added. On July 5, the recovery rate was 71.74 per cent, up from 63.32 per cent the week before it. This was better than the national recovery rate of 60.7 per cent.

Also, the death rate in Delhi fell marginally to 3.08 per cent on July 5 vis-a-vis 3.16 per cent the previous week.  The Delhi government aggressively promoted home isolation of COVID-positive patients who were asymptomatic or had mild symptoms. These constitute almost 80 per cent of all COVID-positive cases, an official said.

Till early June, there were only eight private hospitals that were treating coronavirus patients and these had a sum total of 700 beds available. This was in addition to 2,500 beds in Delhi government hospitals.  Today, there are over 15,000 COVID beds in Delhi. Much of this increased capacity is still vacant, with only 38 per cent of the COVID beds occupied.

It has meant that the people of Delhi feel a sense of confidence that if they need a hospital bed, it would be easily available in a hospital of their choice, a Delhi government official said.

Besides, the Corona App at the disposal of people to monitor the number of beds, counselling given to patients, and teleconsultation provided to patients in home isolation have strengthened the COVID management system, he said.  In a first for the country, a ‘plasma bank’ has been set up by the Delhi government so t patients can easily access convalescent plasma.  An aggressive awareness campaign for plasma donation has been conducted with Chief Minister Arvind Kejriwal encouraging recovered patients to donate their plasma.  Active cases coming down is a “strong sign” of COVID recovery in the city.

Also Read: 6 Months On, What Do We Know About The Coronavirus Pandemic

“Increased testing, isolation, and focussed treatment has contributed to this, and things are looking up for Delhi,” the official said.

“Success of Delhi in tackling the coronavirus lies not just in its capacity to expand hospital infrastructure, increase testing or aggressively isolate; it lies in the ability of the government to understand the psychological and emotional challenges that this pandemic has created,” he added further.

Also Read: 6 Months On, A Recap Of How the Coronavirus Pandemic Unfolded