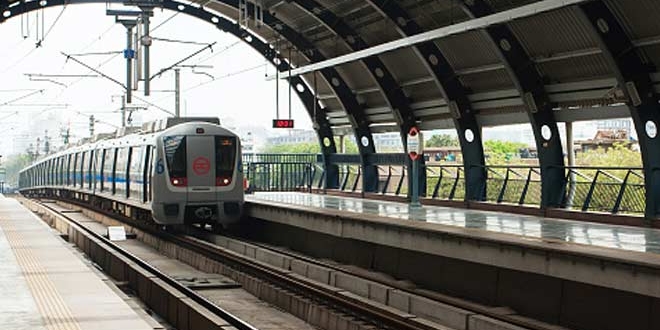 New Delhi: As metro train services have been allowed to resume from September 7 in a graded manner after five months of the shutdown, the Delhi Metro Rail Corporation (DMRC) introduced a new travel protocol for commuters in view of COVID-19, where only designated gates will be opened at stations. Unlike earlier, only specific gates will be opened for travellers both for entry and exit. For example, only Gate number 7 at Rajiv Chowk metro station will be opened. The list of all such earmarked gate numbers at each station will be made available on the website (www.delhimetrorail.com).

Also Read: This Delhi-Based NGO Is Reaching Out To The Marginalised Communities,  Provides COVID-19 Relief To The Transgenders in Delhi

All passengers will be required to undergo thermal screening and hand sanitisation at the entry/frisking point itself. Wearing of face mask/cover will be mandatory for all commuters during entry into the stations/trains and during the entire journey.

Passengers having high temperature or signs of COVID-19 will not be allowed to travel and will be directed to report to the nearest medical centre, an official said. The dwell time (stoppage) of trains at each station will be increased by 10 seconds (from earlier 10-15 seconds to 20-25 seconds) so that passengers get sufficient time to board and alight.

At interchange stations, the dwell time of trains will be increased by 20 seconds (from earlier 35-40 seconds to 55-60 seconds).

All the safety measures have been taken care of keeping in mind the present scenario. New travel protocols for passengers are there as preventive measures to ensure COVID free metro premise. Action will be taken in extreme cases if any traveller won’t agree to follow the norms, a DMRC official said.

Commuters would be required to get their bags/luggage sanitised at the baggage sanitisation counter before crossing the checking gate. Tokens will not be permitted for travelling to prevent transmission of the virus through frequent touching/handling.

Only smart cardholders (including QR code users on Airport Express Line) will be allowed to travel, which can be recharged digitally by a number of ways easily avoiding human interface, DMRC said.

Even recharge of smart cards at the Ticket Vending Machines (TVMs) or customer care centre will be through cashless modes only (debit/credit/Bharat QR code etc). TVMs will not accept cash.

The floors of metro stations are being marked with stickers of social distancing. Staff members standing near the doors of metro rail will ensure people maintain social distancing while getting inside the rail and coming out. Passengers are permitted to sit on alternate seats only in the trains or stand while maintaining distance.

Inside the metro, we have marked seats where travellers would not be allowed to sit so that they maintain social distancing, said the official.

Shops inside the metro railways will be opened as per the government’s guidelines. To reinforce the need for following guidelines, regular announcements regarding maintaining social distance, wearing masks, and other norms will be made inside every station premise.

Monitoring will be done through CCTV cameras for crowd management. Visuals will also be played through LED screens for awareness against the pathogen. DMRC has advised commuters to account an extra 10 to 15 minutes for their daily commute.

Regular cleaning of metro stations will be ensured by prioritising passenger movement areas such as concourse, passages, platforms, stairs, glasswork, steelwork etc. especially toilets which will be cleaned/ disinfected every 4 hours by disinfectants. Thorough disinfection of the entire station will be done during non-revenue hours in the night, DMRC said.

The Yellow Line from Samaypur Badli to Huda City Centre will be operational from September 7. In the first stage, Delhi Metro services will operate in two shifts — 7 to 11 am and 4 to 8 pm.

Can’t Say It Is A Second Wave: Health Minister Satyender Jain On Rise In COVID-19 Cases In Delhi