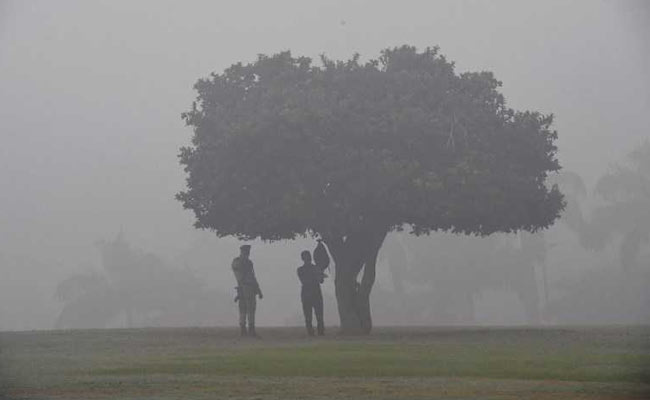 New Delhi: After a brief let-up, the pollution levels skyrocketed in Delhi on November 12 with the air quality becoming hazardous, which environmental agencies consider unfit for inhalation even by healthy people. The pollution monitoring authorities said there may be some respite from tomorrow evening as surface winds will gain momentum. SAFAR (System of Air Quality and Weather Forecasting And Research) said there is possibility of rains in the evening of November 14. However, experts say rain brings temporary relief, but also leads to accumulation of particulates due to high levels of moisture.

The hourly graph of the Central Control Room for Air Quality Management, which had briefly fallen below emergency levels on November 11, recorded PM2.5 and PM10 concentration at 478 and 713 microgrammes per cubic metre by afternoon.

The corresponding 24-hour safe standards are 60 and 100. Visibility came down below 100 metres at many places.

The air quality index of the CPCB had a score of 460, as against November 11 403. The most dominant pollutants were PM2.5 and CO, according to the CPCB air bulletin.

People complained of burning sensation in their eyes and heaviness in breathing, reflecting the severity of the pollution.

The PM2.5 reading of the Centre-run SAFAR (System of Air Quality and Weather Forecasting And Research) was also above 400, which is in the severe category as well.

If the prevailing levels of PM2.5 and PM10 persist for another 24 hours, the odd-even scheme is supposed to be implemented, according to the Graded Response Action Plan (GRAP) being enforced by the Environment Pollution (Prevention and Control) Authority.

CPCB and SAFAR scientists maintained that the fresh spike in pollution was triggered mainly due to drop in inversion layer (the layer beyond which pollutants cannot disperse into the upper layer of the atmosphere), which in turn happened due to sharp drop in minimum and maximum temperatures.

The CPCB’s air lab chief Dipankar Saha said the haze was basically a mixture of dust and moisture. Formation of a thick cloud cover also resulted in the spike in moisture and drop in both minimum and maximum temperatures, he said.

The wind flow from North Western side of Delhi (through Punjab & Haryana) is likely to continue till today. The wind will start flowing towards towards Punjab and Haryana from tomorrow under the influence of a western disturbance approaching Delhi.

Under the above scenario, atmospheric circulation over Delhi will become favourable for substantial reduction of air pollutants from November 13, Mr Saha said.

Meanwhile, the Delhi BJP accused the AAP government of being in an “indecisive state” over the pollution crisis in the city and demanded Lt Governor Anil Baijal to call an all-party meeting.

Manoj Tiwari, the president of Delhi BJP, said that air pollution levels in the city are 4-7 times higher than the normal posing serious health hazard to the people.

Despite this, the visionless Arvind Kejriwal government continues to be in a indecisive state, he alleged.

With schools set to open and heavy public activity likely tomorrow after the weekend break, the Kejriwal government seems to be “lost” as it never formulated a strategy to fight such a climatic emergency, he said.

He requested the LG to call an all-party meeting to discuss the preparations to fight pollution and remedial measures, Tiwari also demanded 24×7 free chest units at all the government and private hospitals in Delhi.

Also Read: Delhi May Get Relief From Next Week, When The Wind Speed Would Increase