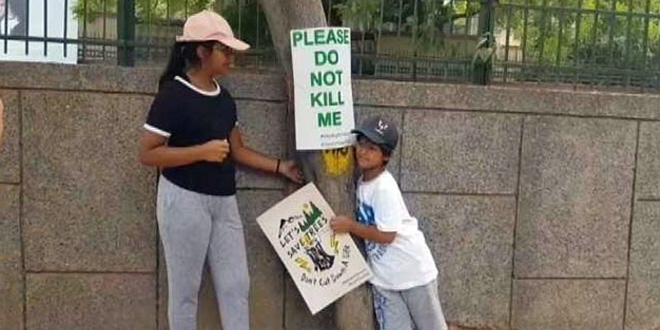 New Delhi:  How could a sapling replace a grown-up tree, the Delhi High Court today asked while observing that felling over 16,500 trees to build multi-storey accommodation for proposed redevelopment of six South Delhi colonies was akin to leaving the city to die.  The high court prohibited the authorities from cutting down or taking away trees till July 26, the next date of hearing on a plea against felling of trees for housing projects and asked whether any environment impact assessment was carried out before initiating the work.

“If Delhi needs that they (buildings) be dismantled, they will be dismantled. You can’t leave the city to die like this,” a bench of Acting Chief Justice Gita Mittal and Justice C Hari Shankar said. It also asked why everyone needs to be given space in the Lutyens’ Delhi when the peripherals of the national capital have so much of vacant land, and added “the mantra is decongestion”.

The court said the authorities should develop colonies like Narela. Taking note of a submission that Delhi was running out of ground water, the court asked the Centre and the city government how they propose to water the saplings which are going to replace fully grown trees under the compensatory afforestation policy.

“Delhi government shall explain how a fully grown tree could be equated with 10 saplings? How long a sapling will take to grow as a tree. Delhi was earlier known for its bird population,” the bench said. It also questioned the Centre on its redevelopment scheme, asking how permission was given to change a two-storeyed building, meant for two families, into an eight-storeyed building. “What do you mean by redevelopment. This is your scheme. Replacing a two-storeyed building with an eight-floor building, this is what you call redevelopment,” the bench said. “From where do you get water for such eight-floor buildings? What amount of garbage will be generated? Where is parking and what about air pollution? You don’t apply you mind to planning,” the bench said.

The counsel, appearing for the National Buildings Construction Corporation (NBCC), tasked with redeveloping half a dozen south Delhi colonies, claimed that no garbage was going out of the construction site. The court was also of the opinion that the construction was an impediment for ambulances and patients in reaching the two super speciality hospitals — AIIMS and Safdarjung — in the area. “There will be traffic jam at the main gate of the colonies. Two major hospitals are at the intersection. How will people reach AIIMS and Safdarjung hospital? You must have done an Environment Impact Assessment. Show it to us,” it said. It also sought to know the density of the area and said that after laying infrastructure including road, water, electricity, garbage system, macro-level planning is done. “How can you amend the master plan retrospectively after developing a colony,” the bench said.

The court asked the DDA to place before it all the schemes of redevelopment. It said why everyone needs to be given space in the Lutyens’ Delhi when the peripherals of Delhi have so much of vacant land and added “the mantra is decongestion”. The court granted time to Ministries of Environment and Forest and Housing, the Delhi government, NBCC, DDA, Delhi Jal Board, NDMC and other authorities to file their response on the petition which has sought setting aside of the terms of reference (ToR) and Environmental Clearance (EC) granted to the housing project by the Environment Ministry, claiming it would lead to felling of over 16,500 trees. The bench also sought details as to how much space has been given for commercial activities. The court said there was a need for the presence of experts related to these issues and appointed environmentalist M C Mehta as amicus curiae in the matter. Delhi government standing counsel told the court that the government has started the process of revoking and reviewing the permission granted to cut trees for the projects.

The court was hearing a PIL by orthopaedic surgeon Dr Kaushal Kant Mishra against felling of trees for housing projects in six south Delhi colonies — Sarojini Nagar, Naoroji Nagar, Netaji Nagar, Thyagaraja Nagar, Mohammadpur and Kasturba Nagar. A similar issue is also pending before the National Green Tribunal (NGT). The petition has claimed that planting of saplings in another location as compensatory afforestation would not reduce the burden which would be put on the environment due to the large-scale felling of trees. It has claimed that saplings would be a “poor substitute” for the fully grown trees that would be felled for the housing projects. The court also sought response of the authorities on a contempt plea filed by environmentalist Vimlendu Jha alleging that there was deliberate and willful default of June 25 undertaking given to the court by the NBCC not to cut trees till July 4 for housing projects here.