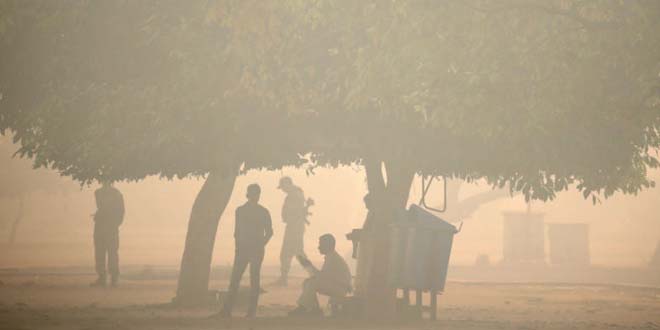 New Delhi: The air quality of Delhi-NCR fell to “severe” on December 5, and is expected to worsen over three days, while the environment body considered implementation of restrictions under severe category of the Graded Response Action Plan (GRAP), officials said. As the situation worsens, the Supreme Court-appointed Environment Pollution (Prevention and Control) Authority (EPCA) on the evening of December 5 directed the governments of Delhi, Punjab, Haryana and Uttar Pradesh to stay alert for effective implementation of the severe category of GRAP.

The EPCA has also asked the authorities concerned to set up a centralised control room that would act as a nodal pollution monitoring centres where people can go and register their complaints regarding air pollution.

The EPCA on December 5 has also asked the authorities to circulate the complaint and Whatsapp numbers so that people can complain regarding incidents of dust, garbage burning in their respective areas, Polash Mukherjee, researcher at Centre for Science and Environment (CSE) and member of the EPCA, told IANS.

While EPCA in October made it clear that the “very poor” and “severe” category of GRAP shall be under force throughout the winters, the environment body has now asked the states to ensure its implementations, as Delhi-NCR saw severe air quality after at least two weeks.

The India Meteorological Department (IMD) will do overnight monitoring of the pollution levels and inform EPCA in the morning, said Shambahvi Shukla, also a researcher at CSE and member of the EPCA.

Under “severe” category of EPCA, coal-based Badarpur power plant (in Delhi), stone crushers, brick kilns and hotmix plants (across NCR) are closed, while public transport and mechanised sweeping is intensified.

According to the IMD, the low wind speed and low mixing height is the reason of drop in air quality across Delhi.

Mixing height is where effluents disperse. If the height is low, pollutant get less space to disperse, said Ms Shukla, adding that wind speed is expected to drop further on Wednesday thereby worsening the air quality.

Receiving both dry-cold northwesterly and moist-cold southeasterly winds, Delhi may however see light showers in next two days, which may bring down the pollution level here.

However the chances of drizzling are low, officials said.

On December 5, the average air-quality of Delhi and Delhi-NCR was “severe”, with at least 11 out of 21 active monitoring stations falling under “severe” and “severe plus or emergency” category.

At 7 p.m., the volume of major pollutant PM2.5 or particles with diameter less than 2.5 micrometers in Delhi was 254 units and in Delhi-NCR it was 261 units- 10 times the safe limit.

The wind-speed on December 5 was around 9 kmph while on December 6 it is expected to drop by 4-5 kmph… There are chances of good rains in Delhi, Punjab and Haryana on December 11 and 12, that would drop the pollution levels here, Mahesh Palawat, director private weather forecasting agency Skymet told IANS.