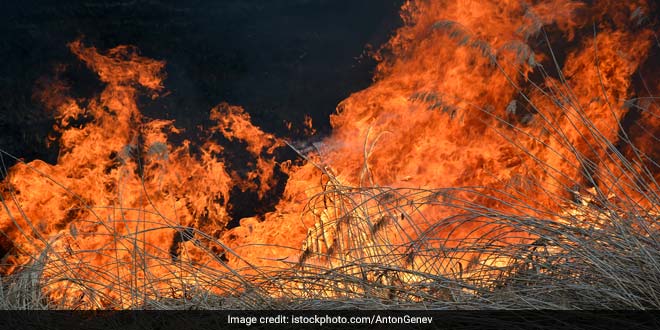 Farmers in these districts are burning stubble now since crop residue could not be burnt earlier on due to moisture, and due to the fact that it’s almost time to prepare the fields for the winter crops, Bharatiya Kisan Union’s Punjab unit member Omkar Singh said.

According to experts, increase in stubble burning might be the reason behind deterioration in Delhi’s air quality and rise in levels of pollution.

There is a possibility of stubble burning being the reason of the hike in pollution levels in the region, A. Sudhakar, Member Secretary of the Central Pollution Control Board (CPCB) told IANS.

Keeping in view the health emergency declared this year and the current levels of pollution; CPCB is now focusing on the long-term measures to not have a similar situation again in 2018. For this the CPCB has directed India Meteorological Department (IMD) to update their system and develop an early warning system for issuing advance warnings of air pollution.

IMD is supposed to develop the early warning system to warn of the smog situation here or the possibility of a dust storm reaching Delhi through Afghanistan. The system at IMD are not accurate as earlier they predicted that dust won’t reach Delhi but it did. At least with early warning we will have time to prepare, Mr Sudhakar said.

According to CPCB, the average AQI of Delhi as monitored by 17 stations 326 points at 4PM with PM 2.5 being the major pollutant.

Air quality of Delhi-NCR is likely to remain in the “very poor” category for at least next three days because of the winds from Punjab and Haryana.