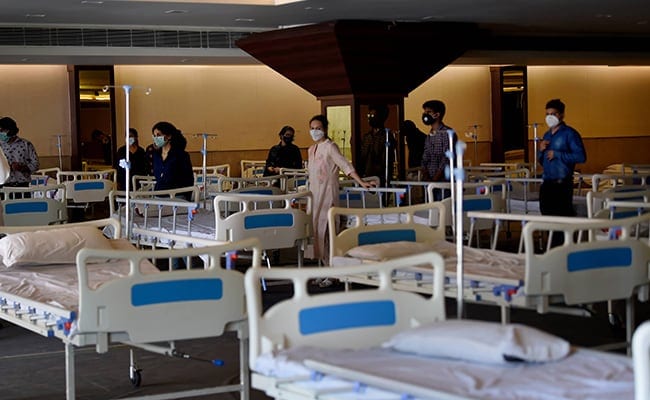 New Delhi: After weeks of battling a sharp surge in coronavirus cases, the national capital on Monday reported less than 10,000 active cases. According to the Ministry of Health and Family Welfare, now Delhi has 9,897 active COVID-19 cases.  Sharing the figures on social media with the world, Chief Minister Arvind Kejriwal said, “Active cases left in Delhi less than 10,000. Delhi is now at 14th position in terms of active cases. No of deaths have come down to 12 on Monday.”

Further rooting for the ‘Delhi Model’ for battling coronavirus, CM Arvind Kejriwal thanked the people of Delhi and said,

I am proud of you, Delhiites. Your “Delhi model” being discussed everywhere. But we should not get complacent and take all precautions.

Along with the message, Chief Minister of Delhi also shared statistics of the national capital’s COVID-19 fight. The statistics showed, Delhi has a total of 13,578 hospital beds to treat COVID-19 patients, of which, 2,954 beds are occupied as of now and 10,624 hospital beds remain vacant. In dedicated COVID care centres of Delhi, of the 10,146 beds, 654 beds have been occupied and 6,924 beds remain vacant. Apart from hospital beds, Chief Minister also shared data for national capital testing.

Last week, Delhi Government was also pulled up by the Delhi High Court for its testing strategy of resorting to more rapid antigen tests rather than the “gold standard” PCR Tests as globally it has been established that Rapid Antigen tests (RAT) are unreliable as they very often have false negatives, where sometimes COVID-infected person can get a negative result. Informing the High Court about the testing strategy, AAP government had said that the government was following existing guidelines and that authorities had been directed to conduct a follow-up test, using the RT-PCR method which is considered more accurate – on all those who displayed symptoms but returned a negative RAT result.

If Delhi has successfully flattened the coronavirus curve or has passed its peak stage, it will be known to us in the coming few weeks, if the death rates in the national capital also start to show a massive decline. What we have seen globally, once the state or city has reached its peak, the infection rate decline and then after one or two weeks there is also a decreasing trend in the death rates. So, if it happens for Delhi then we can say that the picture is shown by the government is correct.

Also Read: 6 MONTHS ON, A RECAP OF HOW THE CORONAVIRUS PANDEMIC UNFOLDED

Highlighting why it is a problem if the numbers of Rapid Antigen Test (RAT) or RT-PCR test doesn’t match or are uneven, global health expert Anant Bhan added,

The antigen tests have a specific role to play in COVID testing – they are cheaper, faster and can give you test results in rapid fashion, but the problem is that there is a false negativity rate attached to this test, which is very high. So, if authorities are doing more of rapid antigen testing then there is a 100 per cent possibility that they can lose out many possible positive COVID-19 cases. Moreover, it will give the authorities a false picture. It is very important that antigen tests are backed by RT PCR test and only then we can say that yes there has been a decrease in coronavirus cases in that particular area. If the numbers of both the tests are not matching then it is a serious issue and it may reflect a bad picture, which was the case with Delhi when High Court asked the government why they are restoring to the use of Rapid Antigen Tests.

According to the data studied by NDTV from June 25 till July 25, the sharp increase in testing in the national capital was primarily because of a sudden spike in the number of the low-cost Rapid Antigen Tests (RAT)  which went up from under 7,000 tests per day to almost 14,000 tests a day. On the other hand, Delhi saw a decline in the number of PCR tests, the most reliable testing method, during the same period, from over 8,000 PCR tests a day to under 5,000 PCR tests per day.

Also Read: 6 MONTHS ON, WHAT DO WE KNOW ABOUT THE CORONAVIRUS PANDEMIC

On Monday, the testing figures shared by Chief Minister Arvind Kejriwal showed that Delhi had conducted more than 4,000 RT PCR test and around 5,000 Rapid Antigen Tests.

Active cases left in Delhi less than 10,000 today. Delhi is now at 14th position in terms of active cases

No of deaths have come down to 12 today

I am proud of you, Delhiites. Your “Delhi model” being discussed everywhere

But we shud not get complacent and take all precautions pic.twitter.com/WJFZ51zSYK

The city’s death rate stands at 2.89 per cent with 12 COVID-19 deaths on Monday. It is also the fourth consecutive day when the national capital had registered less than 1000 new COVID cases.

Explaining the Delhi figure, Sitabhra Sinha, professor of physics at the Institute of Mathematical Sciences in Chennai, said,

We have done a study in past on Delhi’s R-value, which is also known as the reproduction number. R-value is the number of people getting infected by an already infected person on an average. Delhi’s R figure is at 0.66 currently, which means that every group of 100 infected persons in the city can currently pass on the infection to another 60 people on an average. This value is regarded as a low value and it shows that the coronavirus cases are on a decline in the city.

Continuation of such a low value of R in a community implies that the current wave of the pandemic is on the decline and could be brought under control in the near future with continued containment measures.

I am very impressed with the Delhi Model. Actually, Korean model is 3T – Test, Trace and Treat. Delhi Model is Test and Home Quarantine, and it is very effective as we can see as Delhi’s situation over the last few days has improved. I am very happy and I would like to congratulate the Delhi government that they accomplished this achievement.

Happy that our Delhi Model is being recognized across the globe. I want to thank South Korean Ambassador Shin Bong-kil for his encouraging words. All nations coming together to defeat COVID is the need of the hour.

Happy that our Delhi Model is being recognized across the globe.

I want to thank South Korean Ambassador H.E. Shin Bong-kil for his encouraging words. All nations coming together to defeat Covid is the need of the hour. https://t.co/fIFm6uvkDM

Currently, even though Delhi numbers of coronavirus show a sign of respite, the Delhi Government is still not completely unlocking the capital in order to sustain the efforts. The number of containment zones has also dropped in the city, from 715 containment zones to now 496. Revenue Minister Kailash Gahlot said in a statement on Saturday that the decision was taken after an extensive review by the Delhi government. In the containment zones in Delhi, all entry and exit points are barricaded to prevent any movement of the residents. Police personnel are deployed to keep a watch on it, while necessary supplies are provided to the people in such zones at their doorstep.

Talking about the activities and restrictions allowed in Delhi, even though, Ministry of Health and Family Welfare has allowed gyms and fitness centres to open from August 5, it has not yet received a green signal from the Delhi government. For now, gyms, yoga institutes and other fitness centres are still shut in the national capital. Lieutenant-Governor Anil Baijal has also rejected the Delhi government’s proposal to allow hotels and weekly markets to open as part of Unlock 3 for now.

As far as travel restrictions are concerned, intra-state, interstate restrictions were removed from the capital starting August 1. Buses in Delhi are operational but with restrictions — not more than 25 passengers at any given point of time. Each of these passengers has to be seated. All conductors were given online training to assist commuters, during the three-day pilot run by a team of Indraprastha Institute of Information Technology in Delhi.