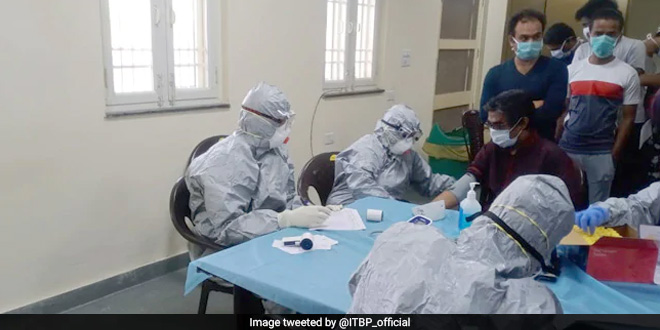 New Delhi: The duration of the third peak of the spread of COVID-19 in the national capital is longer than those of the previous peaks but it may subside in the next few days, Delhi Health Minister Satyendar Jain said on Wednesday. Interacting with reporters, he asserted that the city government has significantly ramped up testing by nearly three times on an average per day compared to the number of tests conducted when the second peak had hit around September 16, when over 4,000 daily cases were being reported.

Also Read: Fight Against COVID-19: With 90% Effective Vaccine, Pfizer Keen On Marketing In India But Cold Chain A Challenge

The minister also said the city government had filed a special leave petition (SLP) in the Supreme Court after the Delhi high court did not allow reserving 80 per cent ICU beds for COVID-19 patients at many private hospitals here, and the top court has asked the government to approach a division bench of the high court.

About two to three months ago, we had written to the Centre to increase about 1,000 beds and 300 ICU beds in Centre-run hospitals in the city, Mr Jain added.

Delhi recorded over 7,800 fresh COVID-19 cases for the first time on Tuesday, taking the infection tally in the national capital to over 4.5 lakh, and 83 new fatalities, the highest numbers since June 16.

This highest single-day spike here till date — 7,830 cases — resulted from the 59,035 tests conducted the previous day, while the positivity rate stood at 13.26 per cent amid the festive season and rising pollution in the city, according to the latest bulletin issued by the Delhi health department.

The previous highest single-day spike till date here — 7,745 cases — was recorded on Sunday.

On Tuesday, 83 new fatalities were recorded, pushing the death count in the national capital to 7,143. On June 16, the city had recorded 93 deaths from COVID-19.

Asked about the long spell of the surge in cases, Mr Jain said in the previous peak which had lasted about 5-6 days, the tests conducted were about 20,000 per day and now the number of tests is nearly three times of that.

The third peak is longer but it “may subside in the next few days,” he said.

Delhi had recorded 71 fatalities from COVID-19 on Monday and 5,023 fresh cases. On Saturday and Sunday, 79 and 77 deaths due to the disease were recorded respectively.

The bulletin said the total number of cases has climbed to 4,51,382.

Meanwhile, seeking to reduce coronavirus-related deaths in the national capital, the Delhi government has ordered COVID-19 test centres to mandatorily check the oxygen saturation levels of people, and persons found with below 94 per cent level are to undergo compulsory medical examination.

Fight Against COVID-19: With 90% Effective Vaccine, Pfizer Keen On Marketing In India But Cold Chain A Challenge