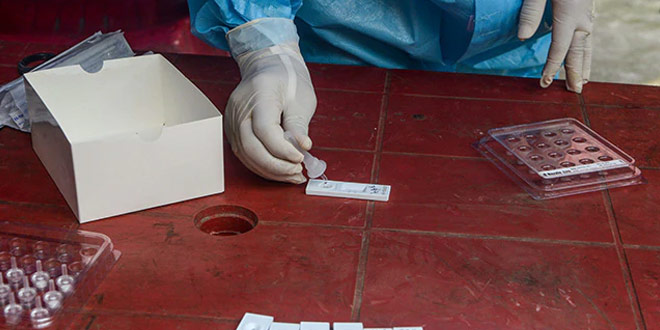 New Delhi: The rapid surge in cases during Delhi’s fourth COVID-19 wave was mainly driven by the Delta variant, which likely has immune-evasion properties and counted for 60 per cent of the cases in April, according to a new study. The Delta variant, B.1.617.2, is 50 per cent more transmissible than the Alpha variant, B1.117, first discovered in the UK, say researchers from the National Centre for Disease Control (NCDC) and the CSIR Institute of Genomics and Integrative Biology (IGIB).

Prior infections, high seropositivity and partial vaccination are “insufficient impediments” to the spread of the Delta variant, found the scientists. They traced the factors contributing to the scale and speed of the fourth wave that started in April in Delhi and compared them to the preceding three waves last year.

We find that this surge of SARS-CoV-2 infections in Delhi is best explained by the introduction of a new highly transmissible variant of concern (VOC), B.1.617.2, with likely immune-evasion properties, the researchers noted.

The variant may have led to insufficient neutralising immunity in people, despite high seropositivity, and social behaviour may have augmented the surge by promoting transmission, they added. Neutralising immunity consists of naturally occurring antibodies that play an important role in the immune system.

To determine whether SARS-CoV2 variants may be responsible for the April 2021 outbreak in Delhi, the researchers sequenced and analysed community samples from Delhi from the previous outbreak in November 2020 until May 2021 and related it to effective reproductive number (Rt). The effective reproductive number is the expected number of new infections caused by an infectious individual in a population where some individuals may no longer be susceptible.

The yet-to-be-published paper, posted on the preprint repository MedRxiv on Thursday (June 3), noted that the incidence of the Alpha variant was “minimal” in Delhi in January, rapidly increasing to 20 per cent in February, and 40 per cent in March. However, the rapidly spreading Alpha variant was overtaken in April by the Delta variant, first found in Maharashtra, the authors of the study noted.

The proportion of the Delta variant increased from 5 per cent in February to 10 per cent in March, before overtaking the Alpha variant by April, and accounting for 60 per cent of the sequenced samples, according to the paper. This increase in the proportion of the Delta variant was paralleled by a large increase in the positivity rate, the researchers said. The positivity rate in Delhi had jumped to over 36 per cent by April third week, meaning one in every three samples being tested was found to be positive for COVID-19. On April 20, Delhi saw the highest spike in daily cases since the beginning of the pandemic with 28,395 people testing positive.

While much more remains to be done, three takeaways for now are: Delta (B.1.617.2) is more transmissible than Alpha (B.1.1.7), there seems to be greater immune escape and reinfection, and fully vaccinated breakthroughs were disproportionately due to Delta, said Anurag Agarwal, director, CSIR-IGIB in a tweet.

The researchers also found that breakthrough infections – catching the virus even after vaccination — were disproportionately high because of the Delta variant. However, they are yet to determine whether the variant also leads to increased case fatality ratio (CFR). “Overall, we note that B.1.617.2 is capable of creating very fast-rising outbreaks with vaccination breakthroughs,” the authors wrote in the paper.

We would re-emphasise that prior infections, high seropositivity and partial vaccination are insufficient impediments to its spread, as seen in Delhi, and strong public health response will be needed globally for its containment, they added.

The Delta variant of COVID-19 has now become the dominant VOC in the UK and may also come with an increased risk of hospitalisation, health officials in Britain have said.

Opinion: At War With The Ecology- The COVID-19 Pandemic Is The Biggest Environmental Crisis Precipitated By Humans