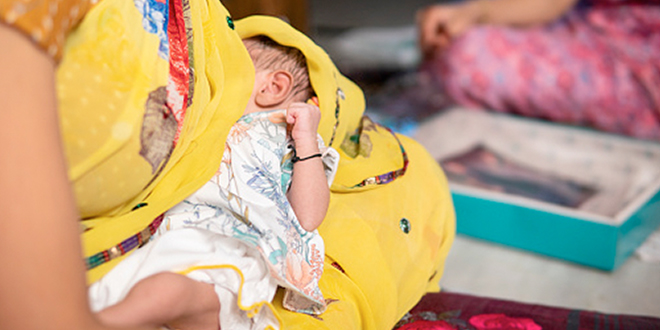 The outreach focussed on promoting breastfeeding amongst women and communities through various awareness campaigns, workshops and rallies throughout the week from August 1-7

Nandurbar: Dettol Banega Swasth India’s Reach Each Child program celebrated World Breastfeeding Week in Rajsamand, Rajasthan and Amravati and Nandurbar, Maharashtra with partner Plan India. The outreach focussed on promoting breastfeeding amongst women and communities through various awareness campaigns, workshops and rallies throughout the week from 1st August to 7th August. Awareness programs supported by nine rallies were carried out in 36 villages in interventional blocks across the two states.

Also Read: “Nutritional Needs Of A Woman Are Higher While Breastfeeding”, Says Expert With Emphasis On A Balanced Diet

The celebration acknowledged ASHA and Anganwadi workers who have been working alongside Community Nutrition Workers to increase awareness on breastfeeding across villages. The program also recognised mothers who had initially delivered Low Birthweight babies and were successfully able to improve their nutritional status to normal through consistent breastfeeding. Anganwadi centres were converted into cinema halls to showcase IEC videos in regional languages while interactive games and videos were organized to engage the audience. The women also did a “Parikrama” Walk of the villages to increase awareness about the benefits of breastfeeding and to promote exclusive breastfeeding for the first 6 months of a child. The program was attended by esteemed chief guest such as Mr. NandlalMeghwal, Deputy Director ICDS, Rajsamand, Rajasthan, Dr.Ramdeo Verma, Medical Superintendent, Amravati, Dr.Tilotama Wankhede, Taluka Health Officer, Dharni, Amravati, Dr. S.N. Parmar-Medical Officer, Dhadgaon, Nandurbar, Maharashtra.

Breastfeeding is important to overall development for child which becomes critical for healthy growth in the future. This experience can be overwhelming for many mothers in case of lack of knowledge and awareness on right practices. Through Reach Each Child, we work with new and expecting mothers on their breastfeeding journey to create awareness programs that directly impact their lives. Our program supports 11,000 pregnant women across two states through multiple interventions and have helped 91 per cent of new mothers initiate breastfeeding.

At Plan India, we are all incredibly proud and delighted to be a part of the program commemorating World Breastfeeding Week. Awareness campaigns like this continue to draw our focus on the importance of breastfeeding for mother and child and the challenges related to it. The Reach Each Child program helps inform and empower women to lead healthier lives by providing them with high quality maternal care, enabling them to take care of themselves and their children.

Reach Each Child is an initiative which works on behaviour change of the community. They bring about health literacy which is lacking. Especially starting with exclusive breastfeeding for the first six months of a child’s life. The project while working and supporting the existing system I believe will do great work for the people of the community.

Dr.Ramdeo Verma, Medical Superintendent, Amravati appreciated the week-long celebration and congratulated the team on successfully holding this awareness campaign. He further appreciated the efforts of the Reach Each Child team in improving the nutritional status of children and increasing the NRC admissions.

Due to Reach Each Child’s continuous efforts we can reach till last mile and reach 100% exclusive breastfeeding target for children till 6 months of age.

The programme was conducted by Reach Each Child team is very fruitful and useful also because of there is need to improve knowledge of women about breastfeeding, health & hygiene also. Such type of event should in regular practice so we can protest new child babies also. I wish to all Plan team for further great Couse of work for grater society.

Reach Each Child Program conducted mothers meeting, group discussion, health talks led by the Anganwadi supervisor, opening the door to talk about the benefits and challenges of breastfeeding. The Chief Medical Officer at the Primary Health Care Centre highlighted the benefits of breastfeeding and reasons for children to exclusively be breastfed for the first 6 months.

Also Read: What Should The Plate Of A Lactating Mother Look Like Amid COVID-19 Pandemic To Enhance Her Immunity?

Aligned with the theme to educate and support, the initiative promotes correct breastfeeding practices and nutrition interventions by providing children, expecting mothers, women, and adolescent girls access to a healthy lifestyle, better nutrition, and improved hygiene. Reach Each Child prioritises adequate nutrition for children within the first 1,000 days of life through locally-led initiatives, with community nutrition workers being key suppliers of information and services. The program has made a significant impact on families in the last two years, with no malnutrition deaths among supported children in Amravati and Nandurbar districts.

Reckitt* exists to protect, heal and nurture in the relentless pursuit of a cleaner, healthier world. We believe that access to the highest-quality hygiene, wellness and nourishment is a right, not a privilege. program has made a significant impact on families in the last two years, with no malnutrition deaths among supported children in Amravati and Nandurbar districts.

‘Knowledge Is Power’, With This Belief, 44-Year-Old ASHA Worker Is Educating People On Health In Bengaluru