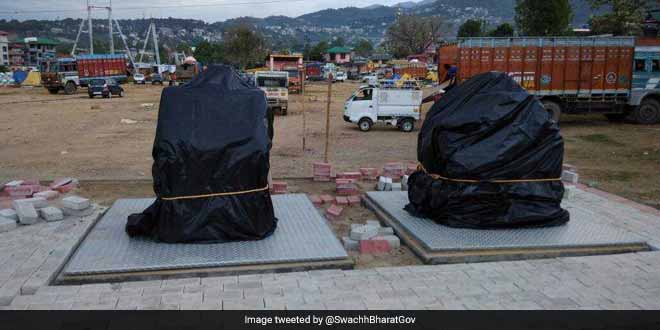 New Delhi: Garbage spilling along the roads, animals digging into the piled up garbage, persistent foul smell and the leachate (hazardous liquid material that leaks from wastes) could well be a thing of the past in Himachal Pradesh’s hillside city of Dharamsala. The Dharamshala Municipal Corporation (DMC) in June had started to install underground bins across the city. Of the total set target of 250 bins, nearly 55 bins have already been placed in the city under the Swachh Bharat Abhiyan.

Talking to NDTV, Satish Chaudhry, Municipal Commissioner, DMC says, In addition with the life expectancy of these underground bins being longer than the conventional ones, the underground bins occupy less space as well. People usually discard their waste around the community bins or throw them into the nearby nallahs polluting the region further. With underground bins being regularly cleared by the workers, this problem can be tackled.

Besides the problem of garbage spills, animal menace is another component that adds to the open dumping, highlights Jitendar Kumar, Sanitation Supervisor, DMC, “Dharamsala has a lot of stray dogs and monkeys and they mostly thrive on open bins for food. In their tussle, the litter falls onto the roads further making the litter problem worse.”

With per bin costing about 4.5 lakh, 70 bins are to be installed by DMC in Phase I, and the rest will be set up in the second phase. A concrete pit is created first on which the bin is installed and is fenced with tiles around it and finally a lid is placed onto the bin. A sensor will soon be attached in all the bins, “It is practically not possible to monitor existing public bins and to ensure that this doesn’t get repeated with the underground bins, sensors will be installed. These sensors will send an alert to the operator once the bin is full, who in turn will direct the civic workers to empty the bin,” explains Mr Kumar. “Crane-like vehicles are specially allocated to remove the garbage from the underground bins.”

The civic body aims to completely replace all the community/public bins with the underground bins in coming few months as confirmed by Mr Chaudhry.

After 10 Deaths In Five Weeks In The Capital, Delhi Government Cracks The Whip On Manual Scavenging