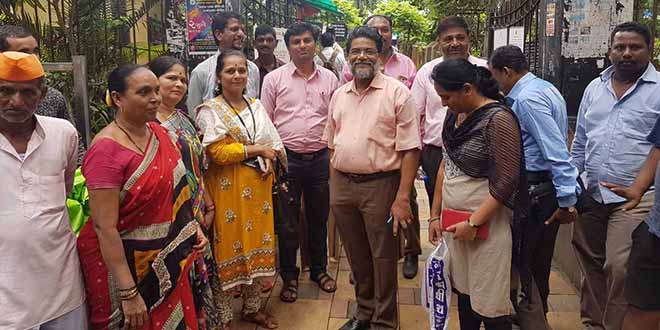 New Delhi: Considered as one of the richest sarees in India, Paithani are hand woven silk sarees characterised by borders of an oblique square pattern, and a pallu with a peacock design. Now, one may wonder how paithanis can have a slightest possible connection with polythene bags. Well the Brihanmumbai Municipal Corporation’s (BMC) B ward, four weeks back came up with an innovative idea of discouraging usage of plastic bags by offering these authentic, expensive sarees in return to residents of Dhongri, Bhindi Bazaar and Mandavi.

Under its ‘say no to plastic’ campaign, officials of BMC started giving lottery tickets to residents who ditched plastic bags and instead opted for cloth bags to buy vegetables. The BMC collaborated with farmers from Nashik district and came up with ‘Thursday Weekly Bazaars’. Farmers from Nashik’s Yeola town travelled for nearly 4-5 weeks and conducted these vegetable stalls every Thursday. In these unique bazaars, farmers provided fresh farm vegetables and groceries at minimal or subsidised rates to those carrying cloth bags.

Talking to NDTV Udaykumar Shirurkar, Assistant Commissioner-B Ward, BMC says, The bazaars attracted a huge crowd and while conducting rounds we noticed that almost everyone carried plastic bags. While otherwise it is difficult to curb the usage of polythene, we came up with the idea of giving an incentive in return. The farmers suggested that Paithani sarees should be given to winners selected through a lottery system. Interestingly, the sarees were ordered from the same town of Yeola where these farmers live considering that the town is known for its Paithani designs.

He further adds. “When we announced the scheme, it gave a huge boost to our campaign and people registered in huge numbers to win the sarees.”

It was only in the first week that the ward officials had to spread messages on ill effects of using plastic bags as from the next week onwards, residents realised their responsibility towards the environment and switched to cloth bags. On August 20, the results we announced and four winners were given the Paithani saree.

After knowing the extent of environmental degradation that plastic bag cause, I definitely think it is a good initiative to switch to plastic alternatives. Though the initiative has ended, I will continue using cloth bags and encourage my neighbours to do the same, says Yojana Sevekar, one of the winners.

Sharing similar views, Mr Shirurkar says, “Majority of the people in B ward have gotten habituated with using cloth bags. In the initially days of our campaign we didn’t record any change despite conducting multiple awareness rallies and programmes. A change was witnessed only after we introduced the lottery system.”

Though the BMC planned to run the initiative for a longer period of time they had to discontinue it due to the unforeseen farmer strikes in Maharashtra, “Once the farmers’ issues get sorted, we have asked the farmers from Nashik to continue their weekly bazaar,” says Mr Shirurkar.

Dharamsala Addresses The Issue Of Overflowing Garbage With Underground Bins