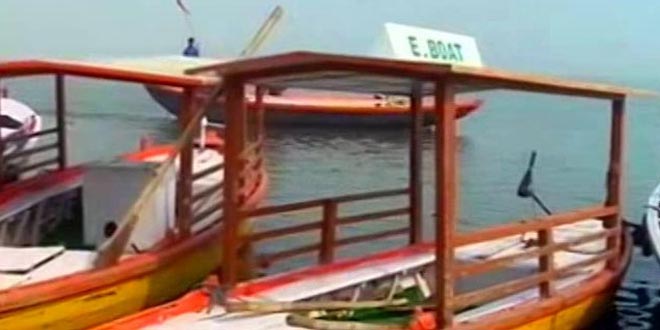 Varanasi: Twenty six-year-old boatman Suraj manages at least 10 trips up and down the famous ghats of Varanasi on a lucky day in the tourist season. But these trips use up at least 10 litres of diesel, a major air pollutant.

His is among the 600 diesel boats running on the River Ganga in Varanasi, which adds up to the pollution levels in a city that – according to official figures of the Central Pollution Control Board – had the most toxic air across India last year.

Despite Prime Minister Narendra Modi launching battery-powered boats in his Lok Sabha constituency with much fanfare in May this year, the scheme seems to have not been a huge hit. It has had just 11 takers so far and even they are back to using diesel-run boats.

There are too many hassles in charging the batteries. It would’ve been better had there been a battery charging point somewhere near the ghats. I understand the pollution being caused but we can’t help it, said Suraj.

I agree that diesel driven boats cause a lot of pollution but we have to see the economics of it. Eventually, the plan is to phase out these diesel boats and we will do it better, Suraj said.

Experts say among other big reasons for Varanasi’s critical pollution levels are the open burning of garbage at many spots, construction, and an ever increasing number of vehicles that emit dangerous fumes.

Traffic constable Chandra Prakash Singh, who has been posted at a prominent intersection, says, “I am trying very hard to transfer to a non-field job as the pollution is too much.”

Varanasi has been consistently among one of the most polluted zones in the country. It peaked at a critical 771 on the air quality benchmark a few days after Diwali.

SN Tripathi, a professor at IIT-Kanpur, says, “I would recommend a solid waste management plan for the city. Vehicular emissions and paving of roads are low hanging fruit and if we go after them, there will be significant difference.”

Will NGT’s Order Of Rs 10,000 Fine On Public Littering Solve Anything?