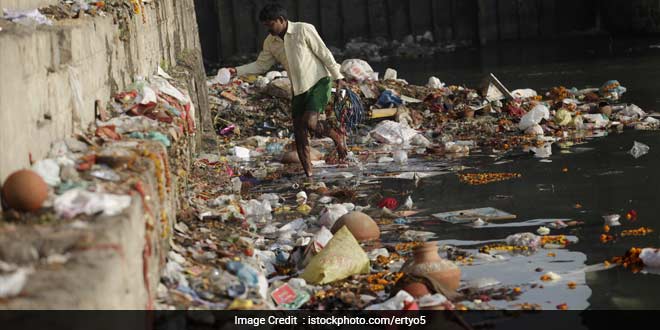 In a landmark judgment, the National Green Tribunal (NGT) declared 100 metres from the edge of the river Ganga as a ‘no-development zone,’ along the stretch of the river from Haridwar in Uttarakhand to Unnao in Uttar Pradesh. The judgment also prohibited disposing of waste within 500 metres of the river and imposing a hefty fine of Rs 50,000 on anyone violating the order. The 543-pages long judgment also asked Uttar Pradesh to specifically remove tanneries from Kanpur and relocate them to somewhere else within six weeks. The judgment comes at the wake of the river being in a polluted state, with water depletion, waste and sewage disposal becoming significant issues affecting the river. On the occasion of this landmark judgment, let us look back at the 10 major issues related to the state of river Ganga, which led to this judgment.

Efforts to clean and rejuvenate the Ganga are not new. In 1986, a massive programme called the Ganga Action Plan was launched, amidst much publicity and with a budget of huge Rs 350 crore. The programme achieved mixed success, as only 35 per cent of the sewage generated was treated by sewage treatment plants (STPs). The plan also failed to ensure that STPs set up under the plan remained operational as 14 STPs stopped functioning across Uttar Pradesh, Bihar and West Bengal, within 3 years of the plan’s implementation. Overall, the plan and its renewal for a second phase in 1993 did not help the Ganga’s cause much, as waste disposal in the river from industrial and domestic sources continued unchecked.

For all the talk about Ganga being India’s holiest river, its treatment by the general public has been far from sensible, let alone environmental friendly. India’s rising population post-independence saw the states of Uttar Pradesh, Bihar, West Bengal, and Jharkhand and Uttarakhand later on becoming heavily populated. This culminated into settlements along the river, resulting in rampant disposal of untreated domestic sewage in the river. Over 29 cities, 70 towns and about 4,700 villages extend along the Ganga banks. Open defecation, disposal of solid and liquid waste, disposal of animal carcasses, mass bathing and even disposal of corpses have been regular occurrences along the river, contributing to its severely polluted state.

Industrial Waste in the River

Industries situated along the banks of Ganga have been the river’s bane for decades now. Pollutants, laden with heavy and toxic metals are often discharged into the river without treatment. A Central Pollution Control Board (CPCB) survey conducted from December 2015 to January 2017 found that out of 302 grossly polluting industries situated along the river’s banks, 96 were found to be non-complying. Across the 5 basin states, 764 industries were found to be polluting ones. The Namami Gange programme, which aims to create new STPs with 932.84 million litres per day (MLD) capacity,  have succeeded so far in creating only 198.13 MLD.

The Problem of Tanneries

NGT’s judgment stressed specifically on the shifting of tanneries from Kanpur, Uttar Pradesh to somewhere else, within six weeks. The urgency in the judgment is justified as it was identified by NGT in January 2015 itself that 700 tanneries in Kanpur were among the ‘highest sources of pollution’ in the Ganga. The NGT bench, headed by Chairperson Justice Swatanter Kumar directed the immediate curbing of waste disposal of tanneries or their shifting. However, no heed was paid to the NGT’s directives, despite the Green Court directing inspection by a team comprising representatives of the state pollution control board, CPCB, Environment Ministry and National Ganga River Basin Authority. Only 45 tanneries have been shut in Kanpur till now.

Habitats situated along the river Ganga have been equally responsible for the river’s state. Drainage systems along the river discharge sewage directly into it, a practice continuing for years. 400 million litres of waste flows from into the Ganga daily from Kanpur alone, comprising everything from faecal sludge to kitchen waste. In cities like Kanpur, Varanasi, Patna, the drainage system has been designed in a way which leads the sewage directly to the river. In 2013, the Patna High Court asked the responsible municipal corporations to redesign the drainage system so that sewage gets redirected to STPs and not the river. Despite hearings in 2015 and 2016, the civic bodies are yet to comply with the order.

Apathy of States towards Ganga

Previous instances of NGT’s hearings related to the Ganga saw the Green court pulling up states for their lacklustre attitude towards the river. During Phase I of the Ganga Action Plan, the Ganga basin states had failed to maintain STPs due to rising maintenance and power costs. The five basin states have continuously failed on all counts of STP maintenance, eradication of waste disposal and sewage discharge in the river as well as taking stern measures to stop activities by industries or individuals to curb pollution.

NGT’s recent sessions on the plight of Ganga also touched upon the important issue of public money going to waste. The Namami Gange programme, armed with a budget of Rs 20,000 crore for a period of 5 years is yet to achieve significant developments, despite being announced in 2014. The NGT reprimanded agencies in charge of executing Namami Gange’s objectives for not being able to clean a single drop of the river, in February 2017. In July 2016, NGT asked for details of how the Centre planned to utilise the Rs 20,000 crore allocated to clean the Ganga and also issued noticed to the state governments of Bihar, Jharkhand and West Bengal, asking for submission of financial plans of the states in cleaning up the river.

The state of Ganga has resulted in several environmental organisations and NGOs working towards improving the state of the river. These movements have helped keep public conscience and consciousness alive about the state of the Ganga and have also sought legal course to prompt states to initiate clean up proceedings. The Ganga Bachao Andolan, started in 2000 by Patna based environmental activist Vikas Chandra has successfully eradicated the practice of disposing corpses in the river on Patna’s banks. Mr Chandra had also filed a successful public interest litigation (PIL) at the Supreme Court in 2013 resulting in the apex court setting up guidelines for disposal of unclaimed dead bodies. In 2014, Rishikesh based NGO Ganga Action Parivar offered its help to Prime Minister Narendra Modi in cleaning up the river.

NGT’s previous trysts with the Ganga

The NGT has previously, on several occasions brought up the issue of Ganga in many of its hearings and has also passed judgments related to activities along the river. In March 2017, NGT prohibited camping activities within 100 metres of the river to curb disposal of waste. It also recognised 23 spots which were completely out of bounds for tourists looking to camp. In October 2016, the Green court once again reprimanded both the Centre and state governments for their lack of knowledge on how many drains carried sewage into the Ganga. NGT had also pulled up the Centre and the state government of Uttar Pradesh in October 2016 to cite how zero results were achieved till then.

The Supreme Court of India in October 1987, passing a judgment based on a writ petition filed by environmental lawyer and activity M.C. Mehta. The petition was filed by Mr Mehta, requesting the court to take stern measures to ensure protection of the river. Ruling in favour of the petitioner, the Supreme court asked the tanneries of Jajmau in Kanpur to clean their wastewater entirely or shut down within six months In January 1988, another judgment of the Supreme Court ordered the local municipality of Kanpur to clean the city’s sewers, construct public latrines and relocate 80,000 cattle dairies to prevent animal waste getting dumped in the river. The latest NGT ruling is reminiscent of the Supreme Court ruling, which was the first instance where the apex court prescribed a set of judgments to ensure the river’s well-being.

NGT’s latest judgment, if adhered to, will solve the long standing problem of pollution in the Ganga caused by Kanpur’s tanneries. The imposition of the fine may deter even casual disposal of waste along the river banks. The judgment of Ganga’s clean-up has been divided into three phases, with the phases of Gomukh to Haridwar and Haridwar to Unnao being covered by judgments. It remains to be seen what judgment the NGT decides to pass for the remaining areas of Unnao to border of Uttar Pradesh, border of Uttar Pradesh to border of Jharkhand and border of Jharkhand to Bay of Bengal, and tackle comprehensively the problem of pollution in Ganga.