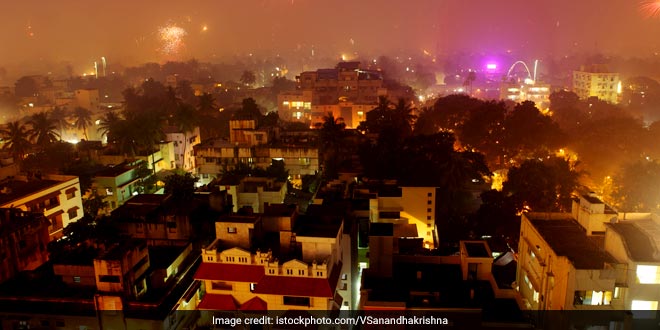 New Delhi: With Diwali just round the corner, citizens across India are gearing up with preparations of the festival like mithais, rangolis, lights and in parts of India, firecrackers. The magnum of celebrations has an inverse relationship with the air quality as witnessed over the years; Higher the pompous of celebrations poorer the air quality gets. A 2016 report by Central Pollution Control Board (CPCB) shows a drastic increase in air pollution post Diwali celebrations across the country with cities like Delhi, Mumbai and Ahmedabad among the worst-hit areas.

The worsening of air quality every year post Diwali is one of the least spoken about issues impacting the environment which vanish within a month or two, only to return next year. This year the debate on air pollution due to burning of crackers has resurfaced with the Supreme Court’s order to ban the sale of firecrackers in one of the most polluted cities in the world, Delhi. The decision that attempts to give citizens good quality of air to breathe has been opposed by many factions of the society. While some argue on the economic loses, the others argue on religious lines.

Just a day after Diwali in 2016, last year, an emergency was imposed in the national capital as people woke up to an average Particulate Matter (PM), a standard measure of air quality, 2.5 level of over 700 micrograms per cubic metres, 29 times above the WHO standards (for 24-hour average PM 2.5 levels is 25 micrograms per cubic metres). While Delhi was labelled as the worst performer other cities like Mumbai, Ahmedabad, Kolkata, Lucknow and Pune were not far behind.

Looking at the condition of the capital city which was covered in a thick grey blanket of smog, a day after Diwali, the Delhi High Court had described it as a ‘gas chamber’. Data released by the CPCB said that toxic gases and pollutants remained close to the surface due to low temperatures and the lack of winds thus worsening the air quality. This meant that all the pollutants remained trapped at ground levels and thus were very close to our noses. In several parts of the city the PM 2.5 levels went as high as 999 micrograms per cubic metre. Despite being one of the greener areas of Delhi, Chanakyapuri, recorded a PM2.5 level of 999 as against the safe standard of 25.

The smog induced visibility was so low that an incident of collision of five vehicles on the Delhi-Noida highway was reported. People were asked to stay indoors and avoid all kinds of outdoor activities.  Seven areas in city were featured among the 10 most polluted places in the country.

As a desperate measure, the state government had executed the odd-even vehicle scheme for 15 days to bring down the pollution levels. Though the citizens followed the scheme and took out their vehicles on alternate days based on their number plates, no significant change was recorded. This year with the SC’s decision the city hopes to avoid repeat of last year’s ‘dangerous’ situation. Union Ministry of Environment said that burning of solid waste and crops, vehicular emissions and dust from construction sites were mainly responsible for the city’s smog.

2) Ahmedabad – A Hotspot For Air Pollution

The rate of urbanisation and industrialisation has been rapidly increasing in Ahmedabad, the largest city of Gujarat. With rising number of industries and vehicles in the city the air quality has deteriorated over the last decade. The city which is already struggling to improve its air quality faces a backlash every year during Diwali.

The Ahmedabad Municipal Corporation had placed ambient air quality sensors at three locations — Pakwan Crossroads, Income Tax Crossroads, and Vadaj Crossroads during the festival. The result: air pollution shot up 13 times the permissible limit causing a public health crisis. The civic body said that air pollution was particularly high in the eastern parts of the city. The ambient air level at Cadila Bridge in Narol rose by the 40%, it went upto 115 post Diwali as against the 78.71 in September.

Though Mumbai fared better than Delhi and Pune in terms of air quality, its PM 2.5 stood at a ‘hazardous’ level of 494. A 2016 pollution report by the System of Air Quality Weather Forecasting and Research (SAFAR) highlighted the rise in PM levels of three days – 278 on Diwali, 315 the day after Diwali and 221 two days later.  Like Delhi, weather factors played a role in high pollution levels of the island city. A drop in wind speed from a day before Diwali was recorded due to bursting of firecrackers. Due to this the thick layer of smog was much higher from the ground in Mumbai and was dispersed in next 3 days.

Pune’s pollution level was just four times less than Delhi last year! While pollution levels in cities like Delhi, Mumbai and Ahmedabad rose due to several factors, pollution spike in Pune was mainly from cracker emission last year said a SAFAR report.  Shivajinagar located in the heart of Pune was found to be one of the most polluted areas of the city with PM2.5 level at 400. Hadapsar, Katraj, Lohegaon and Bhosari were other areas found to be more polluted post Diwali celebrations.

Lucknow – As per air quality monitoring station of the Central Pollution Control Board, areas like Lalbagh and Aliganj had toxic substances constantly rising in the atmosphere on the day of Diwali. The overall PM 2.5 level spiked to 834 in the city.

Kolkata – The city of joy had placed Pollution Control stations to monitor the air quality. One which was set at Victoria Memorial Hall recorded PM10 count of 246 (two and a half times the permissible limit). It came as a surprise to many considering that the area is green and non-residential. The overall PM 2.5 rose to 378 which amounts to ‘unhealthy’.