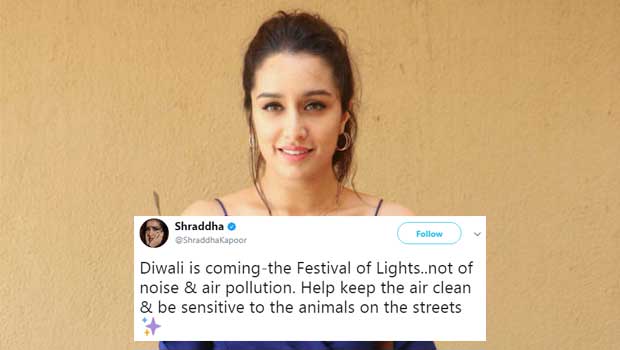 New Delhi: Ahead of Diwali, for the sake of the environment and growing air pollution in the country, Actor Shraddha Kapoor took a stand and posted a video message on Twitter to urge all her fans to go cracker free during this festive season. The 30-year-old actor said, “Diwali, the Festival of lights is coming, it is not a noise & air pollution festival. Help keep the air clean and be sensitive to the animals on the streets.”

She also added, I just wanted to say that please don’t buy fire crackers and don’t burst fire crackers. Not only does it cause a lot of pollution but it also troubles all the animals on the streets.

The actor also urged her fans to have a safe Diwali by spending time with family and loved ones.

Diwali is coming-the Festival of Lights..not of noise & air pollution. Help keep the air clean & be sensitive to the animals on the streets✨ pic.twitter.com/9H7QmlTf9S

According to the 2016 study by the Chest Research Foundation, Pune, and students from the Interdisciplinary School of Health Sciences of the University of Pune, popular firecrackers like the snake tablet, the laadi (string of 1,000 crackers), fuljhadi (sparkler), anar (flower-pot), chakri (spinning firecracker) – emit particulate matter (PM) 200 to 2,000 times above the safe limit prescribed by the World Health Organization (WHO). In India as many as 1.2 million deaths take place every year due to air pollution, according to the recent report by WHO.

Also Read: Go Cracker Free This Diwali And Save The Planet, Actor Dia Mirza’s Message For The Swachh India

Though bursting crackers is solely not responsible for Air Pollution, but, they can further worsen the deteriorating state of air quality in our cities.