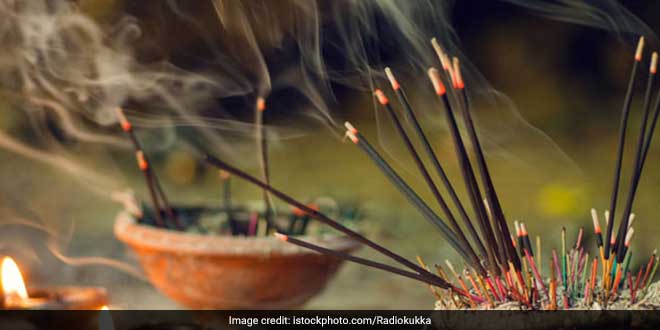 Mumbai: Disturbed by the rampant dumping of waste in India’s largest river Ganga, two best friends from Uttar Pradesh have developed a method to divert floral waste by recycling it. Ankit Agrawal and Karan Rastogi from Kanpur started a social enterprise ‘HelpUsGreen’ in 2015 to recycle the waste. The organisation collects floral waste (3,700 Kilos) daily from 59 temples and 9 mosques. The collected waste is upcycled into incense sticks or agarbattis, biodegradable packaging material and vermicompost. 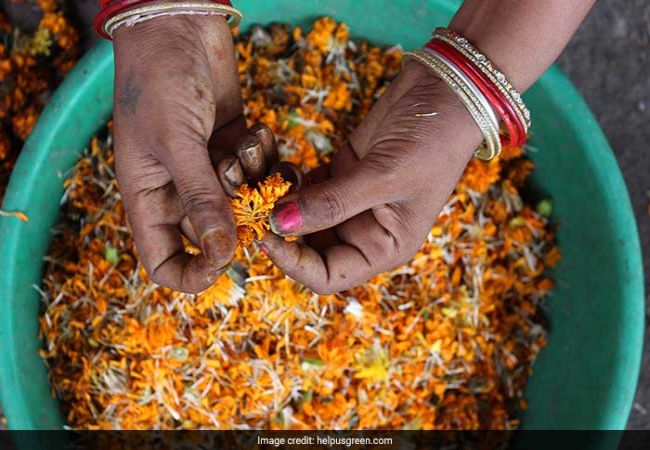 It was easy at first to blame the tanneries, factories and sewers that were indiscriminately dumping their refuse into the river.  Something had to be done about this. Looking for the right opportunity, research revealed to us that most of these flowers that end up at the temples are loaded full of pesticides and insecticides. Once they reach the waters of the river, the chemicals wash off, mixing with the water, making toxic compounds, suppressing the oxygen level and thereby gravely threatening the marine life. Along with my friend Karan, we realised a mission to repurpose this waste coming from places of worship. It was the birth of HelpUsGreen.

How Flower Waste Is Reused To Make Incense Sticks And Cones

Operating on a personal transportation facility that goes from temple to temple, the organisation collects discarded flowers and brings them to their facility in Kanpur. The women dominated staff at the facility segregates other wastes like paper, plastic and idols from the flowers. To get rid of the chemical residue, organic bioculum is sprayed on the flowers. After washing all the flowers, each petal is kept under the sun for drying. The dried petals are then powdered and mixed with natural plant resins and a special kind of sauce is added to make a dough. The dough is hand rolled in shape of incense sticks and cones and are again kept for drying. The dried sticks and cones are then dipped in essential oils, milk and honey. The final step is to pack them in boxes made from recycled Kraft paper. 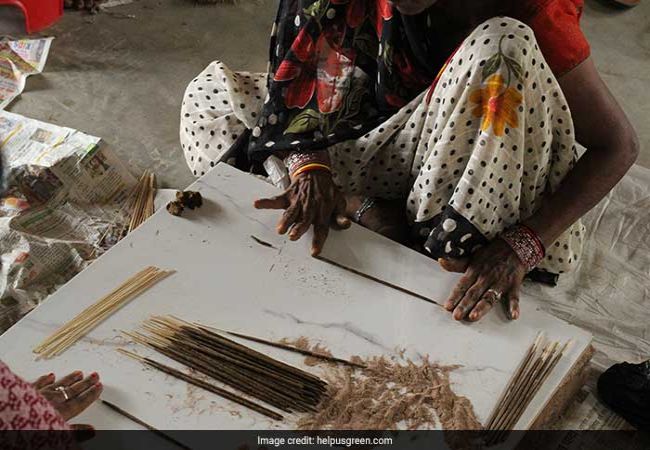 3,700 kilos of floral gets recycled daily

A must for all religious and holy ceremonies, incense sticks are said to have a purifying effect, but the smoke released by these can pose some health risks, according to a study conducted by the scientists in South China University of Technology. Pollutants released by the smoke of incense sticks can sometimes cause inflammation in the tubes that are responsible for passing air to lungs. Content of sulphur dioxide, carbon monoxide and oxides of nitrogen can lead to chronic diseases like asthma and chronic obstructive pulmonary disease. 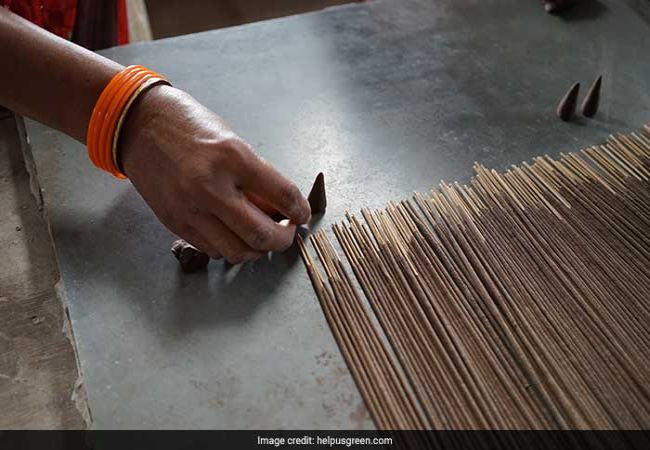 The agarbattis that HelpUsGreen make are completely eco-friendly and pose no harm to one’s health.

Phool Incenses are 100 per cent organic without a hint of charcoal. With 13 unique fragrances blended in an organic amalgamation of temple flowers, milk, honey etc and dipped in natural essential oils, it aims at saving the Ganga. Every incense stick or cone is handcrafted, using sacred temple flowers and highest quality ingredients provided by nature. Each fragrance offers a beneficial effect to the body, hence making it safe and healthy for all users, says Ankit.

The incense sticks can be purchased from HelpUsGreen website and the cost ranges from anywhere between Rs 105 and Rs 165. Though manufactured in Kanpur, the organisation provides a free delivery service across India. 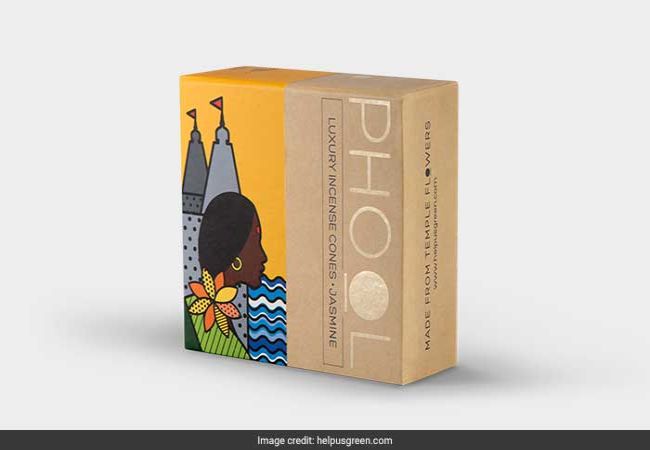 With air pollution already increasing in major cities of India like Delhi, Mumbai and Ahmedabad, environmental experts and doctors are warning people about the dangers of inhaling toxic pollutants and have advised people to stay indoors. However, the problem of air pollution isn’t just confined to outdoor pollution, as indoor pollution is also a major cause for health problems in India. In such a scenario, Ankit and Karan’s eco-friendly incense sticks and cones are a viable option you can give to your loved ones this Diwali and make the festive season pollution-free.

Besides, each gift box comes with a hand-stitched organic cotton tote bag to discourage the use of plastic bags and all its boxes are made from recycled Kraft (type of a cardboard) thus giving the customer a wholesome waste-free experience.

In last three years, the organisation has recycled over 2,573 tonnes of floral waste and given employment to over 170 underprivileged women who used to work as manual scavengers. The organisation has also funded education of 19 children. 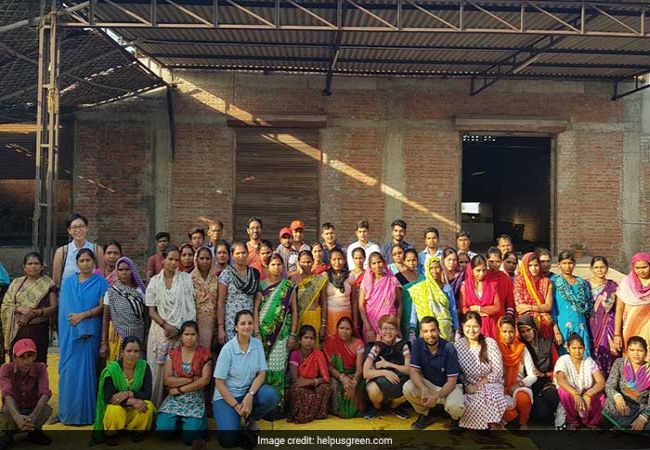 Earlier, I cleaned toilets in 20 houses every day. It was so awful I didn’t feel like eating. HelpUsGreen has given me and my children a new birth, says Saroj, one of the flowercyclers at the organisation.

Urging citizens to be more responsible in their dumping habits, Ankit says,

The flower market is increasing by five per cent every year. The only way to meet the rising demand is using pesticides to grow them. However, these flowers once used, are dumped into the rivers, their chemicals causing infection in the water. This is also the water that serves as the means of livelihood for thousands of families. We sincerely urge our fellow citizens to use flowers more responsibly.

Diwali Special: Give Your Home Décor An Eco-Friendly Twist With These 5 Super Easy DIY Ideas