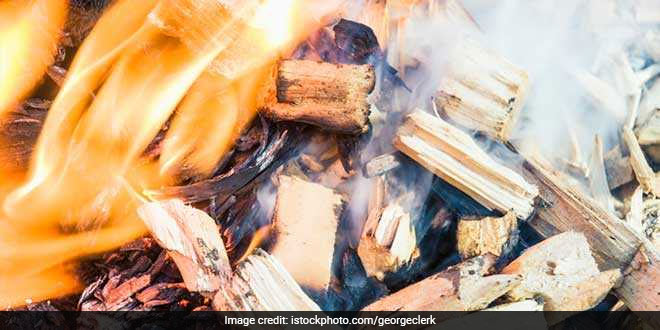 New Delhi: Emissions from domestic biomass burning has emerged as the deadliest air pollution source in India with it being responsible for around a quarter of the deaths caused by PM2.5, a global study has found. And this may only be the tip of the iceberg as the study does not take into account indoor exposure to biomass burning, especially in rural areas where charcoal, firewood and animal dung are used for cooking in the absence of cleaner fuels.

According to the latest Global Burden of Diseases (GBD MAPS) report by the Boston-based Health Effects Institute, residential biomass burning was behind 2,67,700 deaths or nearly 25 per cent of the deaths attributable to PM2.5 in 2015. The report, which was released today, builds on the GBD report, which was launched in November last year.

That report had attributed over 1.1 million deaths recorded in 2015 to outdoor exposure to PM2.5, which are ultrafine air-borne particulates as tiny as 30 times the width of a human hair.

The latest study focuses on the major sources of PM2.5 that are behind the deaths namely, residential biomass burning, coal combustion in industries and thermal power plants, burning of crop residue and vehicular combustion.

Coal combustion, roughly evenly split between industrial sources and thermal power plants, was responsible for 169,300 deaths (15.5%) in 2015. The open burning of agricultural residue was responsible for 66,200 PM2.5-attributable deaths (6.1%), the report says.

Transport, distributed diesel and brick production were responsible behind 23,100, 20,400 and 24,100 deaths respectively, it says.

However, the researchers of the study engaged with premier institutes in the US, China, Canada and India among others, noted that the findings may be underestimating the actual contribution of transport sources.

Transportation and distributed diesel sources typically operate in closer proximity to populations than do large stationary sources such as power plants and industrial facilities.

For that reason the approach taken in this analysis may underestimate actual exposures and the related disease burden attributable to these sources, the report adds.

The burden of disease, in terms of the numbers of deaths attributable to total PM2.5, is expected to grow in the future, as the population ages and grows and leaves more people susceptible to air pollution, the researchers have forecast.

The study says that if emission control measures are not taken, the number of deaths caused by PM2.5 in the country will rise to 1.7 millions in 2030 and reach 3.6 millions in 2050.

It projects another scenario marked by major commitments to emissions reductions in the face of continued economic growth are made, which may arrest any further rise in the deaths and contain them to the 2015 levels in 2030.