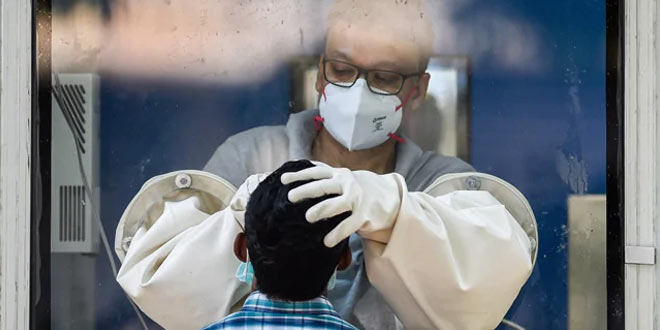 New Delhi: Union Home Ministry on Friday said that door-to- door health survey in Delhi will be completed by June 30. In a series of tweets, Spokesperson, Ministry of Home Affairs mentioned about the meetings done earlier to combat COVID-19 in the national capital. “On 25 June, Union Home Secretary reviewed implementation of various decisions on COVID in Delhi which were taken on 21 June in a meeting chaired by HM @AmitShah. Member NITI Aayog, Director AIIMS, DG ICMR along with Delhi’s Chief Secretary and Health Secretary attended the meeting,” tweeted Spokesperson, Ministry of Home Affairs.

The subsequent tweet of Spokesperson, Ministry of Home Affairs reads,

In the meeting, it was clearly noted that decisions were being implemented in a smooth and timely manner and a COVID response plan was finalised for Delhi. District level teams for COVID related tasks were also constituted.

It was also informed in the meeting that the re-drawing of containment zones including all clusters of COVID outbreak in Delhi would be completed by June 26 as per the timeline fixed by Home Minister AmitShah, read another tweet that also added that completion of door to door health survey would also be done by June 30.

The serological survey in Delhi will begin from June 27, it said.

As per the directives of HM @AmitShah, discussion was done on the serological survey in Delhi, which will be carried out jointly by NCDC and Delhi Government. Survey will begin from June 27, training of all the concerned survey teams was completed yesterday, read another tweet from Home Ministry.

Home Minister AmitShah also approved the combined use of Aarogya Setu and Itihaas apps as strong predictive tools for future detection of COVID outbreaks in population clusters. Training on combined use of apps was imparted by NCDC trainers to the district teams of the Delhi Govt yesterday, said MHA spokesperson in another tweet.