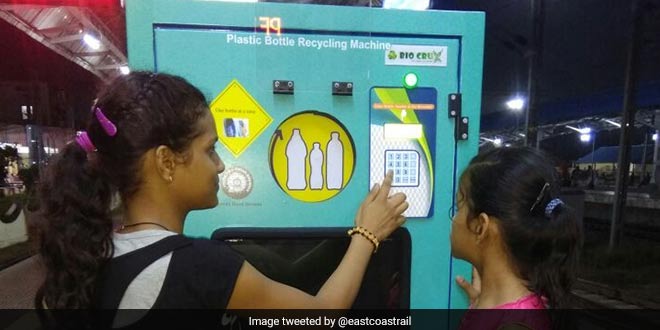 New Delhi: Ran out of your talk time during an important conversation? If you are at Bhubaneswar Railway station then all you need to do is take out that empty plastic bottle in your bag and put in a recycling machine. And voila! You will be rewarded with a recharge of Rs 10 worth of talk time. Taking up innovative measures to encourage people to recycle used plastic bottles, the East Coast Railway has installed a bottle recycling machine in two platforms on the Bhubaneswar railway station. Depositing a discarded bottle will fetch a person mobile talk time worth Rs 10, and this facility can be availed unlimited times, with every plastic bottle dropped in to the recycling machine.

“We have noticed that people would often casually throw plastic water bottles on train tracks, which would soon accumulate into tiny heaps of garbage. Though people would throw discarded bottles in dustbins sometimes, the habit of casually throwing a plastic bottle anywhere within the station premises remained. We thought that if something could be given to them in return for recycling plastic bottles, the habit might change,” said Jaideep Gupta, Divisional Railway Manager, Sambalpur Division, East Coast Railway.

The machine installed has the capacity to crush and shred bottles with capacity ranging from 200 mililitres to 2 litres. Once a plastic bottle is put inside the machine, the person putting in the bottle will be asked to provide his/her contact details. A message on behalf of the East Coast Railway will be sent to the person and he/she can use the code in the message to earn the Rs 10 worth of talk time through any of the payment wallets used for recharging.

The Bhubaneswar Railways Station has already started collecting the shredded bottles from the machines and plans to use these to manufacture cutlery, carpets or bags and sell them within the station premises. The station authorities also have long-term plans of using the recycled plastic to make toilet cabinets.

We are hopeful that the amount of waste generated in the station would be reduced significantly. The burden on waste transport vehicles will come down as we are hoping that discarded plastic bottles will all be deposited in the machines by commuters, said Mr Gupta.

On Earth Day, Odisha’s Puri Beach Sees A Crocodile With A Plastic Bottle In Its Mouth. Courtesy Sudarsan Pattnaik