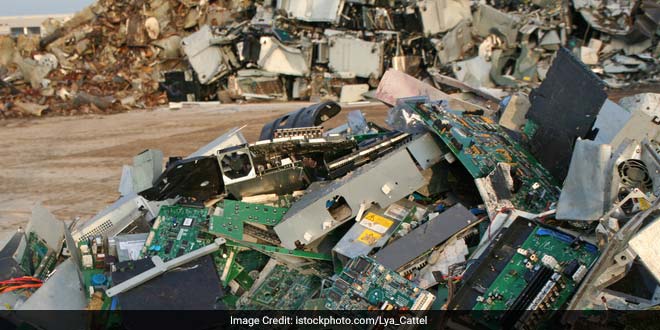 Recently, a joint inspection report by Central Pollution Control Board (CPCB), Union Environment Ministry and Uttar Pradesh Pollution Control Board (UPPCB) found 27 illegal e-waste industries operational in Uttar Pradesh. These units were dumping the waste into the Ramganga, causing irreparable damage to the river and its surrounding environment. This incident highlights the silent crisis building up in India. The country’s burgeoning population on mobile phones has seen stupendous growth in the last decade. From 310 million subscribers in 2001 to 1.1 billion in 2016, the number of mobile phone users in India is nearly 4 times that of United States today and it is second only to China in the world, which has 1.3 billion subscribers. That is just mobile phones, then there are 57 million computers in use and plethora of other gadgets and consumer electronics. But mass scale use of electronic goods has a huge flip side. India is now in the global list of highest electronic waste generators, posing grave threat to the environment and public alike. Electronic waste or e-waste, as it is popularly known, causes toxic emissions and poses several health hazards. 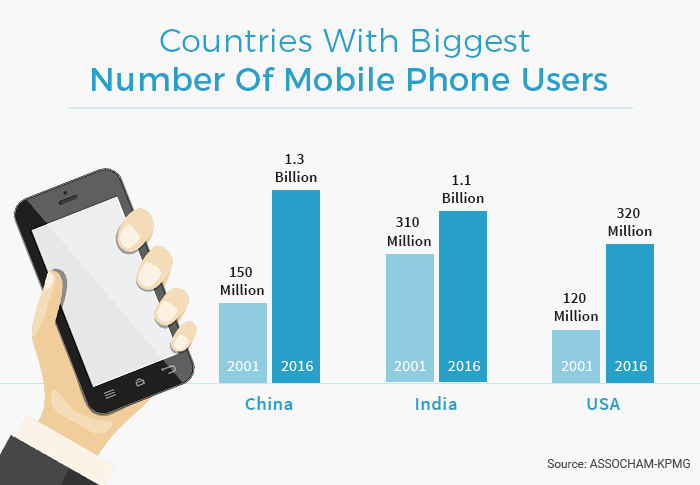 The number of mobile phone users in India has risen considerably

Whenever we think of waste, we think in terms of garbage or solid/semi-solid waste and not anything else. In the last 10 years, e-waste has become a global issue. India too, generates a large quantity of electronic waste every year. Sadly e-waste is something which does not get much media coverage, and people’s awareness regarding e-waste is quite low,” said Asok Kumar Das, Vice Chairman, Indian Institute of Chemical Engineers and author of the report ‘E-Waste Management In India: Current Scenario.’ 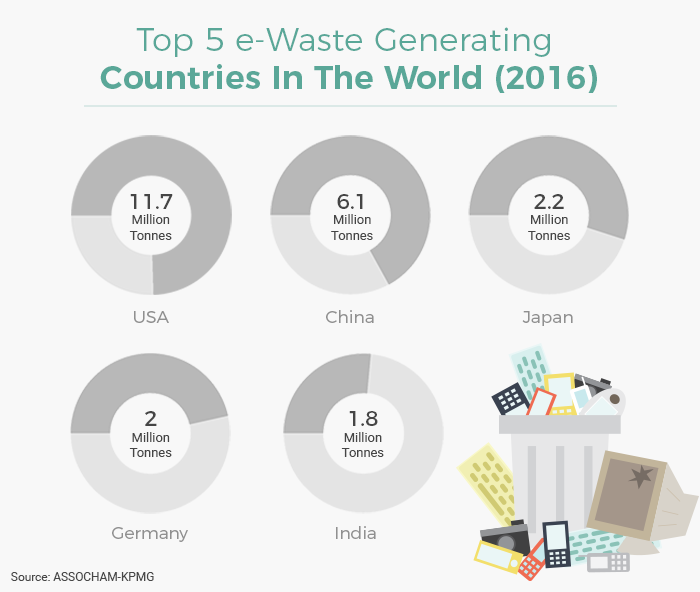 The ASSOCHAM-KPMG study, titled “Electronic Waste Management in India’’ identified computer equipment and mobile telephones as the principal e-waste generators in India. According to this study, computers contributed towards 70 per cent of the total e-waste generated in India, while telecommunication equipment accounted for 12 per cent. Among cities, Mumbai topped the list as it generated an estimated 1,20,000 tonnes of e-waste annually. Delhi and Bengaluru ranked second and third, with 98,000 and 92,000 tonnes of e-waste generation respectively. Approximately 70 per cent of heavy metals found in landfills are accounted for by E-waste.

E-waste recycling is a concept barely existent in India. As a result, the waste generated is often dumped in rivers or dump yards without proper recycling or treatment. This is hazardous on various levels for both the environment and personal health, said M. N. Aggarwal, one of the contributing members for the study.

Much of the e-waste generated is recyclable. Computer equipment such as monitors and printed circuit boards have a number of base metals which can be reused after melting. Unfortunately, India is highly ill-equipped in terms of both legislation and skilled labour to handle e-waste recycling. Only 1.5 per cent of e-waste generated in India gets recycled. This can be attributed to nearly zero awareness about e-waste and its recycling, as well as the fragmented nature of the unorganised sector and its apathy to waste collection and recycling. 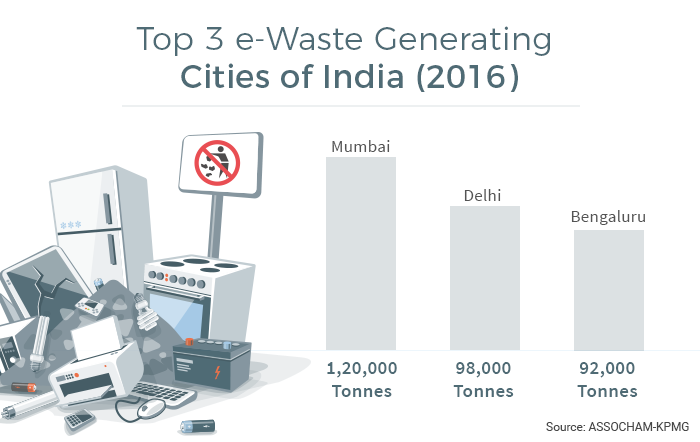 Mumbai generates the most e-waste, followed by Delhi and Bengaluru

The unorganised sector accounts for handling over 95 per cent of e-waste generated in India and it is not surprising that they are not very adept at it. Most of the waste is dumped in rivers, lakes or canals, causing irreparable damage to the environment. E-waste is also sold in the market to scrap dealers who dismantle it instead of recycling. Dismantling e-waste products releases further toxic emissions in the air, causing further pollution, said Praveen Prakash, member of Central Pollution Control Board.

The e-waste recycling industry in India is also ill-equipped to handle recycling. Adequate protective gears like helmets and gloves are rarely provided to e-waste collectors. Knowledge of e-waste recycling is also not prevalent among either organisations or workers, thus allowing them to opt for the easier path of dumping or dismantling the waste.

Certain changes however, are gradually taking shape in the e-waste recycling front. Two Bengaluru based non-profit organisations have collaborated with post offices and Bangalore One to set up e-waste collection units at their premises. Saahas, a Bengaluru based NGO has also started an awareness programme across schools, colleges, hospitals and offices along with door-to-door e-waste collection to educate people more about the harms of e-waste and its recycling procedures. In Mumbai, wards began collecting e-waste from educational institutes from Dadar to Mahim and sending the waste to recycling plants.

The problem of e-waste has been spoken about in some levels in India, but not at a large enough scale to make a considerable impact, especially in the unorganised sector. One of the reasons why there hasn’t been much impact with regard to e-waste is because e-waste is still not seen at par with solid or liquid waste. The fact that e-waste is potentially equally harmful to the environment and can cause hazardous diseases, affect air and water, are factors never taken into consideration. 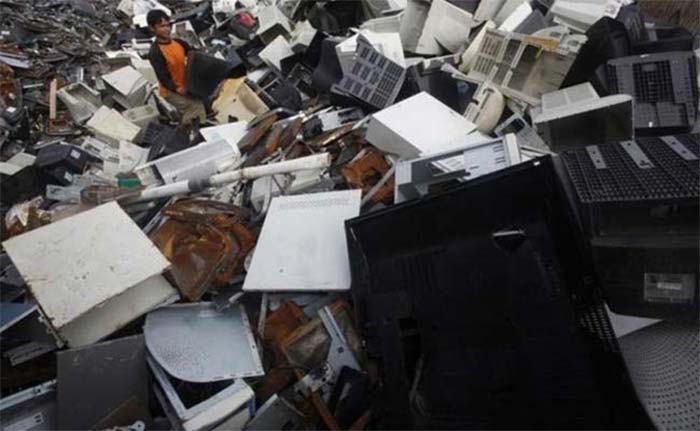 Legislation with regard to e-waste has been another problem for segregation of e-waste in India. In 2016, the Ministry of Environment issued regulations with regard to management of e-waste. Some of the new inclusions in the 2016 notification were the inclusion of manufacturer, dealer and producers of electronic goods as stakeholders. The stakeholders were also made responsible for collection, segregation and recycling of e-waste generated from their activities.

The new rules laid down in 2016 by the Union government have brought in some changes in accountability related to e-waste. Producers have been identified as responsible for the first time. The rules also prescribe a penalty for non-compliance, especially if recycling rules are not followed, said Mr Das.

Despite the 2016 notification, e-waste related norms are flouted on a regular basis.

We regularly try and monitor industries flouting e-waste related norms. The unorganised sector remains a problem though, as most of e-waste is generated from this sector and we have to become more vigilant in keeping a check on them, said Mr Prakash.

With India’s e-waste generation estimated to reach 52 lakh tonnes in 2020, the future doesn’t look too bright, unless stringent recycling procedures are followed. What India needs is more e-waste recycling units than the current 148 units it has. Most importantly the unorganised sector should also be brought under proper supervision and monitoring, so that majority of the e-waste generated could be recycled properly.

There should be no differentiation between e-waste and any other type of waste, as the harm done by the former is no less than the latter. Hence, from collecting to recycling, the awareness and legislation for e-waste should be similar to that of any waste, said Mr Das.

Will The Swachh Campaign Finally Tackle The Scourge Of Manual Scavenging?