New Delhi: In a country where 450 million people defecate in the open and around 60 million tonnes of garbage is generated daily, gone are the days of drab looking ‘Do Not Litter’ or ‘Do Not Defecate In The Open’ sign boards. Today, ‘Clean India’ messages are doled out with a quirky sense of humour and a rather filmy twist. And Bollywood offers loads of ready material for inspiration!  So from Indian railways to city municipalities the swachh message is being spread by re-versioning iconic Bollywood dialogues and scenes. Here’s a pick of our favourite Swachh Bharat message with a Bollywood twist:

1. This one has been doing the rounds of social media and Whatsapp for the last few days. The ultimate googly from Bollywood ‘Ma’ that settles the eternal question, ‘Tumhare pass kya hain?’ The answer is ‘Mera paas toilet hain’ and therefore ‘Mere paas maa hain!’ This poster based on the iconic scene from Deewar was put up in Nainital to encourage people to build toilets as a part of Swachh Bharat Abhiyan. 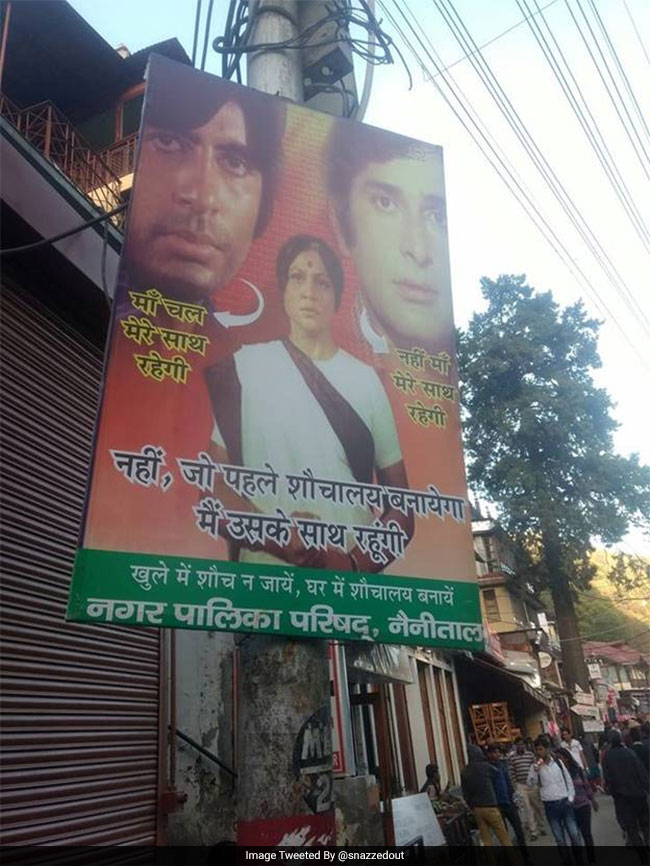 This one even drew a few laughs from Prime Minister Narendra Modi on Twitter. The PM re-tweeted the poster and said, “Haha! Borrows from cinema to make a point on cleanliness. Innovative.”

Haha! Borrows from cinema to make a point on cleanliness. Innovative. https://t.co/PQpX8LHo7l

The creativity and the humour was also appreciated by Minister of State for Home, Kiren Rejiju, as he tweeted his thumbs up to the Swachh Abhiyan poster with the ‘Deewar’ twist, “Most innovative and best use of cinema dialogue.”

Most innovative & best use of a Cinema dialogue? #SwachhBharat pic.twitter.com/cxNmpMHn3R

2. Look out for this one the next time you are at Howrah Railway station. When Sholay’s Samba reminds Gabbar the price of littering: “A full five hundred rupees” 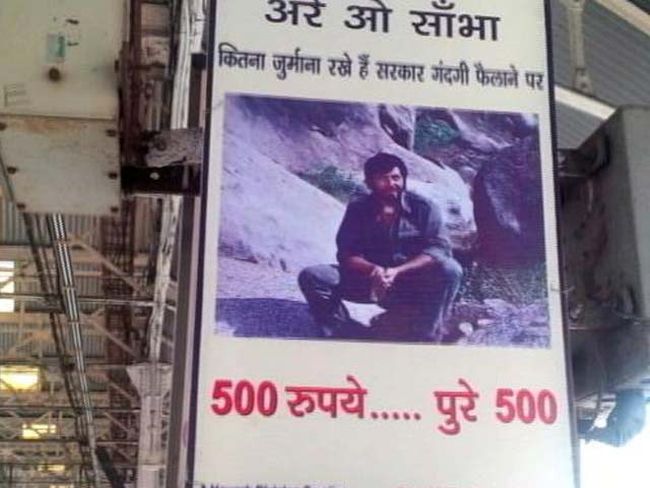 3. Ever saw such a filmy ‘Say no to spitting’ poster? Come to Kolkata’s famous Howrah Railway station and see for yourself.

These famous Bollywood posters at Howrah Railway station are the brainchild of Railways officer Badri Narayan – who holds a PhD in economics besides being a film buff. 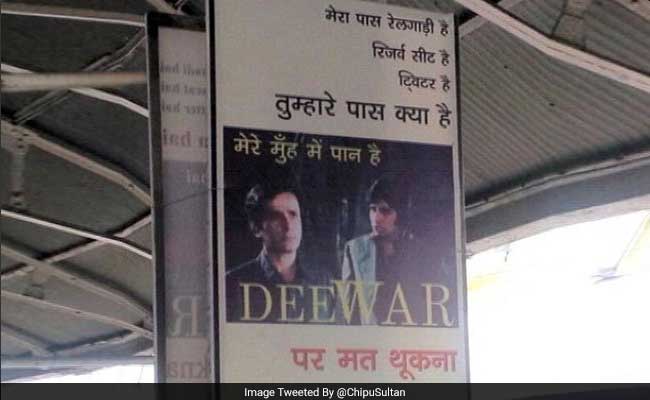 4. Gabbar is back! Only this time he’s telling Basanti not to defecate in the open. This is the wall art done by the volunteers from Project Raahat in Delhi in order to educate slum-dwellers about the hazards of open defecation. 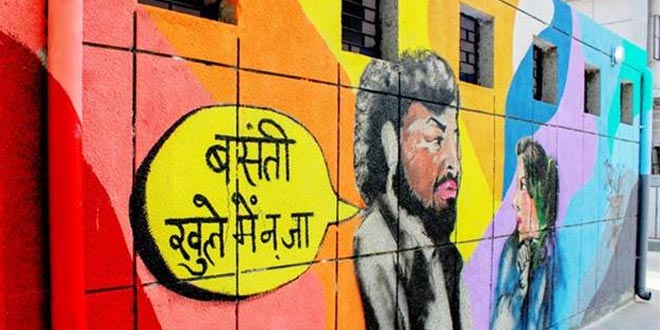 5. Another one from Delhi’s slum: When Hrithik Roshan asks people to build a toilet near their house and stop going to the open fields. 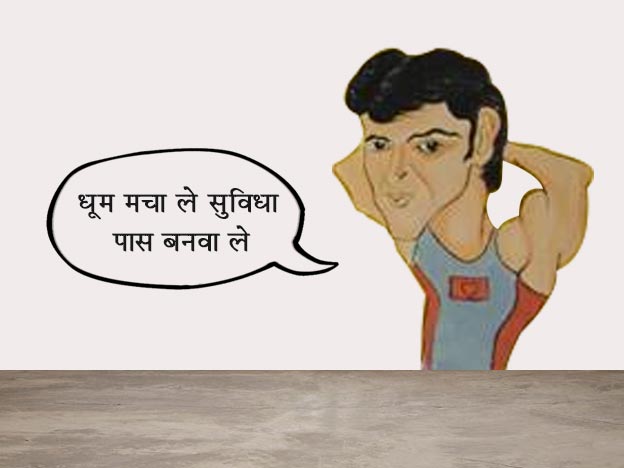 6. ‘Arey Oh Babumoshai – Say no to littering.’ Another poster from Howrah Railway station where Rajesh Khanna philosophizes about life and the meaning of death in a scene from Anand. But in this swachh version he cautions babumoshai: “When, who, and where someone may litter, no one knows.” 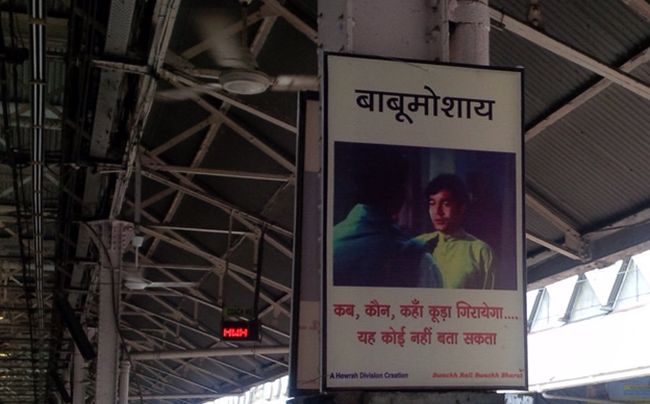 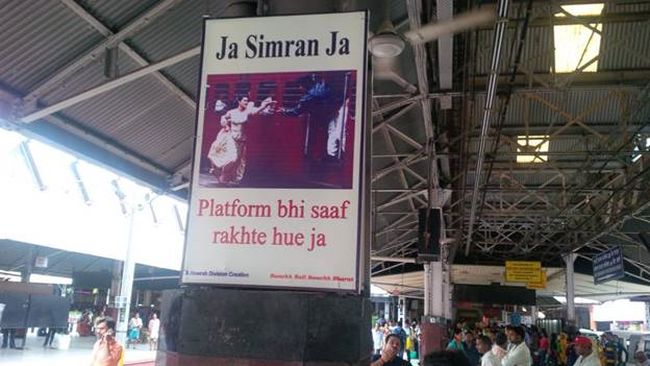 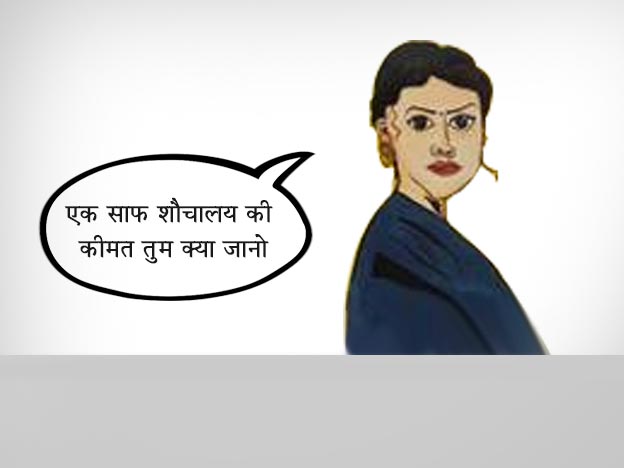 9. Bollywood’s ‘Bhai’ Salman Khan has the most important message of all! This sign made by the students of Shaheed Sukhdev College of Business Studies (SSCBS) in a Delhi slum talks about the importance of flushing. 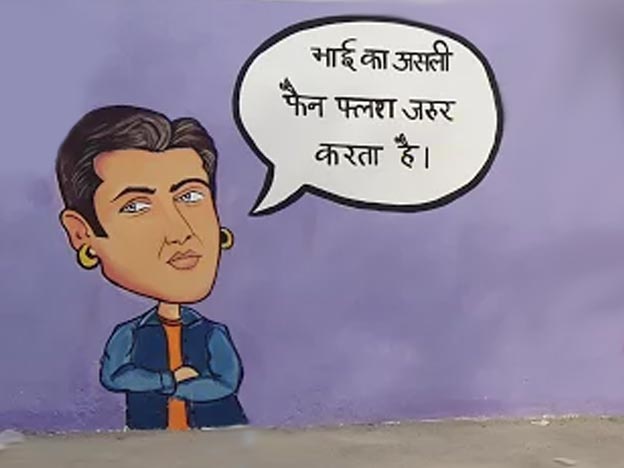 10. Not Bollywood, but equally popular among Indian children, Shin Chan has his own Swachh message. 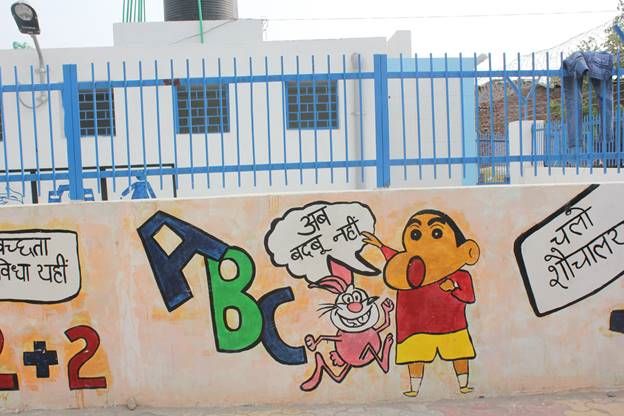