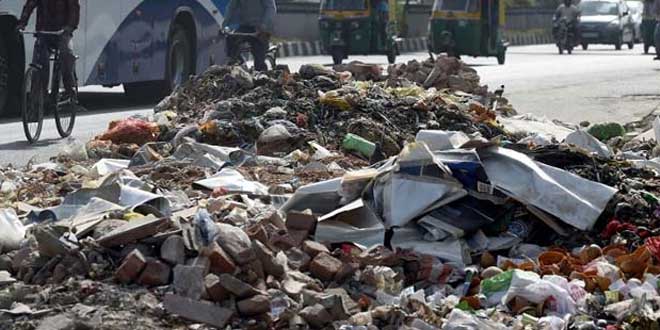 The Aam Aadmi Party (AAP), however, accused the Bharatiya Janata Party (BJP) of playing politics over the garbage in Delhi, at the cost of health and lives of the capital’s citizens.

The National Green Tribunal (NGT) had also issued a notice to the central and Delhi governments and sought to know the steps taken to salvage the situation.

The escalation of protests happened even as the EDMC employees, despite repeated appeals by the Delhi government, refused to withdraw their strike they started on last Friday.

MCD Swachhata Karamchari Union President Sanjay Gehlot said that the sanitation workers had not called off their strike and that they staged a protest at AAP legislator Raju Dhingan’s office in East Delhi’s Trilokpuri area.

“The strike is going on. The confusion is being created among the employees by saying that it has been called off. We won’t resume work until the salary is credited in our bank accounts,” Gehlot told IANS.

Mewati said that the employees of the North MCD also stopped work from Tuesday, as they have also not received their salaries for the last two to four months.

“We have stopped work and staged a protest in Rohini Zone of the North MCD. This problem of non-payment of salaries has to be settled for good,” Mewati told IANS.

The Natioanl Green Tribunal sought to know from the Delhi government, Union Urban Development Ministry, East DMC and the striking sanitation workers’ associations as to what steps are being taken to solve the problem.

Advocate Balendu Shekhar, who appeared for the EDMC, said that a bench headed by NGT Chairman, Justice Swatanter Kumar, issued the notice.

“In the notice, the NGT Chairman has asked what steps the authorities have taken to control the situation and remove garbage from the streets in various parts of east Delhi,” Mr Shekhar said.

AAP’s Delhi Convener Dilip Pandey said when the BJP controls all the three municipal corporations in Delhi, they should be held responsible for the crisis due to civic employees’ strike.

“We have always owned up responsibility and answered questions over issues that come under our jurisdiction. But one needs to ask questions to the BJP as well on the issues for which they are responsible,” Mr Pandey told reporters.

“The BJP is doing politics over garbage at the cost of lives and health of Delhiites. There should be no politics when it relates to the health of the citizens,” he added.

“Most of the employees resumed work on Tuesday. But one section of the MCD workers is still on strike due to political reasons,” he said.

The Delhi government, meanwhile, released details of funds given to the NDMC, according to which, it has already released ₹1,103.91 crore during the current financial year.

On Sunday, Delhi Deputy Chief Minister Manish Sisodia released figures for the EDMC as well, according to which the Delhi government gave ₹609 crore in the current financial year, and ₹702 crore in 2015-16.

Even as some sanitation workers resumed work on Tuesday after Mr Sisodia’s intervention, a section refused to call off the strike and said they would resume work only after their salaries are credited in their bank accounts.

“Confusion was created yesterday (Monday) by spreading rumours that the strike has been called off. Due to this, sanitation workers are angry and spreading garbage on streets in protest,” Mewati said.