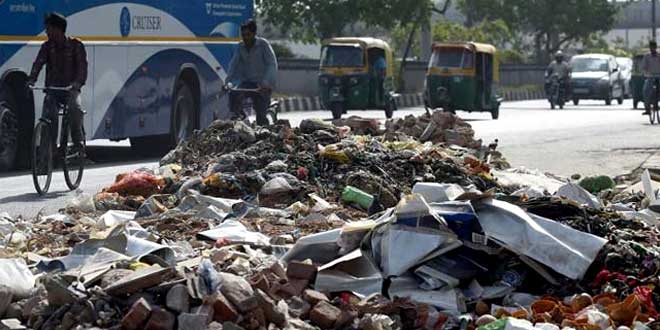 New Delhi: As the civic staff strike in east Delhi continued for the seventh day on Thursday, the National Green Tribunal (NGT) pulled up the Delhi government, civic corporations and the Centre over garbage menace in the capital city.

The Aam Aadmi Party (AAP), however, alleged that sanitation workers were “being compelled” to go on strike as the money given by the Delhi government to the municipal corporations was being “misused” and was not reaching the employees.

Irked over the stink and litter of garbage in Delhi due to East Delhi Municipal Corporation (EDMC) sanitation workers’ strike, the tribunal has sought an explanation for the menace and asked the government and civic bodies for their plans to deal with solid waste.

“In a tussle between government and corporations, you have made the general public suffer,” NGT Chairperson Justice Swatanter Kumar said on Thursday.

Over the matter of pending salaries of the East DMC employees — the cause of their strike — the green panel sought a report from all municipal corporations, the Delhi Development Authority (DDA) and the Delhi government.

“The NGT sought a detailed report by tomorrow (Friday) regarding how much budget MCD received from Delhi government and why it could not give salaries to its sanitation employees,” said Balendu Shekhar, East DMC’s counsel.

The NGT also asked the Ministry of Urban Development what has it done till date for sanitation in Delhi.

Hundreds of sanitation workers gathered outside EDMC office to protest non-payment of salaries. They raised slogans and scattered garbage on the roads.

United Front of MCD Employees General Secretary Rajendra Mewati told IANS that while the salary for the month of November has been credited to the accounts of the sanitation workers, they are still to get salary for December.

“Also, the recurrence of larger issues is the problem. Even if we get salaries now, we are not sure when we will have to come out on the roads again,” Mr Mewati said.

“There is need for a permanent solution. We demand that the three municipal corporations — north, south and east — should be unified, which will solve 80 per cent of the problem,” the employees’ leader said.

AAP Delhi convener Dilip Pandey said the only solution to the crisis was to “rectify the financial mis-governance and eradication of corruption from the three municipal corporations”.

“Due to mis-governance of the Bharatiya Janata Party (BJP), municipal corporations are known as the most corrupt bodies in Delhi,” Mr Pandey told reporters here.

“The money given by the Delhi government is being misused and is not reaching the sanitation workers, which is compelling them to go on strike. BJP has converted the national capital into national shame,” he added.

“BJP has no answer when asked where the money has gone. Neither the number of employees has increased at municipal corporations nor their salaries increased,” he said.

“Then how is it possible that they are not able to pay salaries even after getting significantly more money,” he asked.