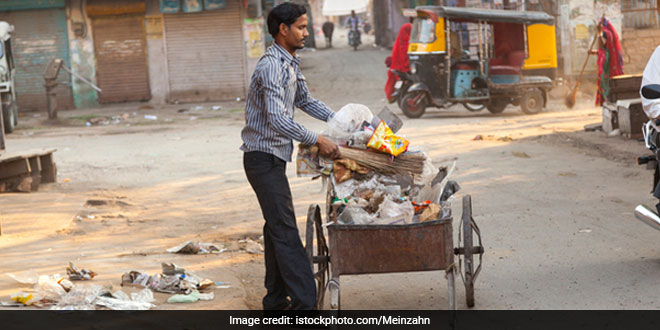 The serene hills of Udhagamandalam, popularly known as Ooty, have always been a popular retreat for those looking to getaway from the weary routine. The lush green surroundings have attracted tourists from all over the world, for years. The steady influx of nearly 50,000 tourists per day while underlining Ooty’s popularity among tourists also highlights the flip side of this influx. Daily 40 to 45 tonnes of dry waste is generated in the town, an alarming number that is difficult to deal with.

In its endeavour to keep Ooty clean, the Udhagamandalam Municipal Corporation (UMC) has taken a logical approach to address the waste problem. Realising that not just tourists, but residents of Ooty also needed to learn and practice waste segregation, the civic body in early June approached nearly 1,200 shops and commercial establishments and asked them to start practising waste segregation.

Many of Udhagamandalam’s shopkeepers did not know much about waste segregation. We also realised that they would collect all types of waste together, which made it difficult for garbage collectors to separate when sending for recycling. This is the reason why we decided to convince about 1,200 shopkeepers and other businesses to adopt segregation methods, says Thiru V Prabhakaran, Municipal Commissioner, Udhagamandalam Municipal Corporation.

After spending 3 weeks on awareness campaigns, educating shopkeepers and commercial establishments, about the types of waste generated and why segregating them into dry and wet waste was important, the UMC began its waste collection drive on June 21.

The UMC asked shopkeepers to segregate waste and keep it outside their establishments, which would be collected by the UMC officials. This would be done on a weekly basis. The shopkeepers have also been told about the gravity of the situation and how not segregating waste makes it difficult for civic officials when the waste is being sent for recycling. The UMC has also decided that a fine amount would be decided upon and imposed on shopkeepers who do not comply with the segregation rules set up by the civic body.

On its first day of waste collection, the UMC managed to collect nearly 1.5 tonnes of dry waste from various shopkeepers from all over Ooty. The UMC termed this as a fantastic number for the first day.

The participation from the shopkeepers has truly been astonishing. We will cover the rest of the establishments using street meetings, within the next week, says Mr Prabhakaran.

The “zero-waste policy” initiated by the UMC, aims to ensure that waste is properly segregated by the commercial establishments in the town. Plastic waste in particular is the bigger problem for UMC, as over the last year, there have been instances of plastic clogging drains and choking the ground under the forests nearby.

The challenge posed by tourists remains unabated, as instances of them carrying plastic sachets and disposing these anywhere are aplenty. Weekly cleaning operations conducted by the district administration have done little to discourage tourists from disposing waste in a disarraying manner. But with the UMC taking up waste segregation seriously, the civic body is hopeful that tourists will also follow suit.

Our zero-waste policy will only be successful when we as locals also adhere to it. When local shopkeepers and businesses begin segregating waste, the task for garbage collectors becomes easier. We also hope to spread the message of not disposing garbage to tourists with similar awareness initiatives, billboards and signage. The aim is to ensure that the environmental sanctity of Ooty remains intact, said Mr Prabhakaran.

For now the plastic waste is being taken to the Dry Resource Collection Centre (DRCC) in Kandal for shredding and recycling. The shredding centre, which began functioning in January 2017, is used exclusively to recycle plastic. Recycled plastic from DRCC will be used to make roads. The UMC plans to sell other dry waste such as scrap metal, wood and glass to buyers who can reuse these for commercial purposes.

Also Read: A Landfill In Size Of Delhi Will Be Needed To Dump India’s Waste By 2050: Study

This Social Enterprise In Bengaluru Is Recycling E-Waste