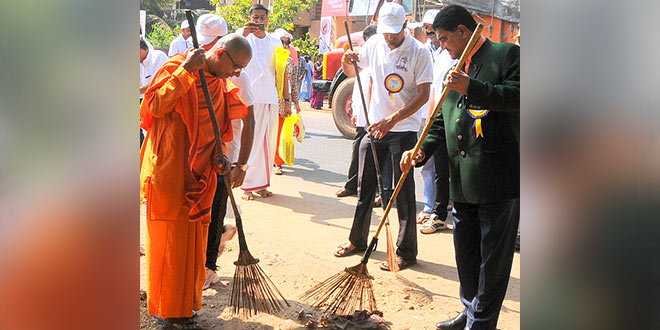 From its inception in 2014 the Swachh Bharat Abhiyan called on NGOs and civil society organisations to come forward and actively help  in the implementation of the Abhiyan’s goals. In the three years since it became operational, there are several success stories of NGOs in assisting state and local administrations in constructing toilets and managing waste. One such non-profitmaking body associated with the Abhiyan is the Mangaluru Ramakrishna Mission, which has successfully completed three phases of its association with the Swachh Bharat Abhiyan and is on the verge of beginning the fourth one.

An organisation with global presence, Ramakrishna Mission’s Mangaluru chapter has been instrumental in aligning itself with the Swachh Bharat Abhiyan. Since 2014, the organisation has carried out cleanliness drives in Mangaluru, held awareness events and has interacted with panchayat heads to ensure that rural areas are not left out of the ambit of the Swachh Bharat Abhiyan. The fourth phase of the Swachh Mangaluru Abhiyan will involve nearly 110 gram panchayats in Mangaluru and Bantwal, and will begin from the first week of November.

Additionally, the Mission has also brought schools and students under its ambit in the upcoming phase of the Swachh Mangaluru Abhiyan.

The fourth phase of the Swachh Mangaluru Abhiyan is our most ambitious phase yet. We are roping in school students to spread the cleanliness message on a larger scale. We are also launching a massive waste composting programme across 1,000 households near the Mutt so that there is no generation of unsegregated waste from these households, said Swami Jitakamananda ji, President, Ramakrishna Mission Mangaluru.

The first cleanliness rally was arranged by the Mission in February 2015, which saw the participation of over 500 young volunteers from all over Mangaluru. For the next 40 weeks, nearly 4,000 people participated in various cleanliness drives across the city under the Mission’s guidance. During this period, the Mission also honoured 75 sanitation workers from the Mangaluru City Corporation for their contribution towards making the city cleaner.

We want everyone associated with keeping the city clean to know that their efforts are appreciated. Everyone’s contribution towards keeping Mangaluru clean is equal and worthy of acknowledgement, said Swami Jitakamananda ji.

The Mission’s involvement of adjoining rural areas of Mangaluru under the Abhiyan has also yielded significant efforts. Earlier in May 2017, a daylong workshop involving the representatives of over 50 gram panchayats was held in the city, organised by the Mission. In the following months, volunteers and Mission officials visited rural areas near Mangaluru and arranged for extensive cleanliness drives. The Mission has also held many workshops in gram panchayats to train residents on the importance of waste segregation. In the coming phase, the Mission will further extend its work to 110 gram panchayats. Composting, segregation and waste management will be the principal focus in this phase of the Swachh Mangaluru Abhiyan.

The Mission’s contribution in making Mangaluru a city better at waste management, has been tremendous. Their latest phase will focus on the adjoining rural areas of Mangaluru and we are hopeful that like the earlier phases, this too will bring in positive change in the waste management scenario of Mangaluru’s outskirts, said Sasikanth Senthil, Deputy Commissioner and District Magistrate, Mangaluru District.

The Mangaluru city ranked a respectable 63 in this year’s Swachh Survekshan rankings. While the city would definitely want the rank to go up a few notches higher this year, the example of Ramakrishna Mission launching such a large scale mission to change Mangaluru’s cleanliness scenario is commendable. The Mission could serve as a successful example to other such organisations working in the realm of Swachh Bharat Abhiyan and looking to cooperate with local administrations to bring about change.

To Meet Swachh Rajasthan’s Deadline, Kota Ropes In Police To Eliminate Open Defecation In The District