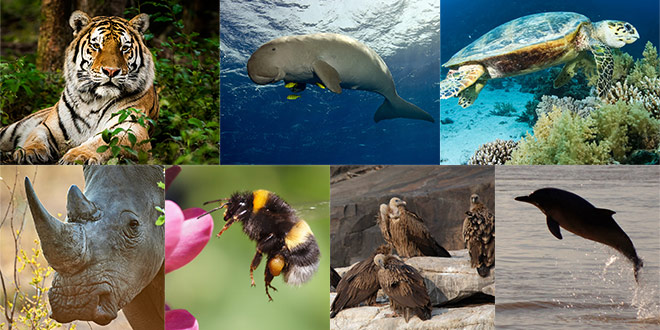 New Delhi: According to experts, healthy biodiversity is essential for human health and survival. Biodiversity includes all species of animals, birds, plants, fish, insects and microscopic organisms. However, a large number of species have become endangered due to human activities over the years. As per the 2018 report of World Wildlife Foundation (WWF), there has been a 60 per cent decline in the population of mammals, birds, fish, reptiles, amphibians in just 40 years. The International Union for the Conservation of Nature (IUCN) Red List of Threatened Species, which is the inventory of the global conservation status of species compiled by United Kingdom based IUCN, reveals that as of today, of the 1.2 lakh (1,20,372) species surveyed so far, over 32,000 are threatened with extinction because of human activity, in particular overfishing, hunting and land development.

It’s high time we learn that humans are not at the centre of the existence of this beautiful planet; we are just another piece in this brilliant jigsaw that makes our planet. For the sake of the health and survival of our future generation we have to focus on restoring the balance and conserve the Earth’s flora and fauna. The warning that has been raised again and again is that we have absolutely no time to wait; whatever we do now is going to determine the future of humanity.

He further said that extinction is happening faster now than ever before and there are some species which are left in such few numbers that the next generations may not be able to see them if nothing is done for their conservation. Here are some of the endangered species, the extinction of which will affect the humans badly in the years to come.

The Indian vulture has been listed as Critically Endangered on the IUCN Red List since 2002, as the population severely declined. From millions, the population of the Indian Vulture has reduced to just a little over 10,000. According to the State if India’s Birds 2020 report, Indian Vulture is among the species of birds that have suffered the highest decline in the past 25 years. The cause of this decline has been identified as poaching, habitat destruction and kidney failure by poisoning caused by the pesticides and veterinary drug diclofenac which the Vultures swallow with flesh of dead cattle.

Mr. Raghunandan said that the decline of Indian Vultures can affect the health of the environment and humans drastically. Vultures are the nature’s ‘sanitary workers’, he said, adding that by removing carcasses, these birds help in decreasing pollution and prevent the spread of diseases. In their absence, the population of scavengers like wild dogs and rats, along with their zoonotic diseases would increase greatly, he said.

Another species under threat that humans rely on is the Bumble Bees. According to IUCN, Suckley Cuckoo Bumble Bees have suffered a decline of over 77 per cent over the past 50 years. Bumble bees face many threats, including habitat loss, pesticides, diseases and climate change.

While Bumble Bees do not produce as much honey as Honey Bees, they are effective pollinators for a large number of plants and agricultural crops, said Mr. Raghunandan. Bumble Bees pollinate flowers through a method called “buzz pollination”, a rapid vibrating motion which releases large amounts of pollen onto the bee. The declining population of pollinators like Bumble Bees is a direct concern for human health as it would disrupt pollination that is essential for fruits and vegetable production and would negatively impact food security for the mankind.

Rhinoceros, the large herbivorous mammals that had a population of over 5 lakh at the beginning of the 20th century are now survived by only 27,000 individuals globally, as per WWF. Three species of rhino- black, Javan, and Sumatran are critically endangered. The species of rhino called ‘Greater one-horned rhino’ is one of Asia’s biggest success stories of conservation as the efforts have led to an increase in the number of these rhinos from 200 at the turn of 20th century to around 3,700 today.

Due to its medicinal properties, the horns of rhinos are in high demand, thus, poaching is a major threat to their survival. Apart from poaching, habitat loss is another cause of the loss of these species.

Existence of Rhinoceros matters to humans as they share habitat with a large variety of plants and other animal species and so they help in protecting the ecosystem which provides oxygen, food and other services essential for the human survival.

According to IUCN, since 1920, tiger population has dropped from around 1 lakh to an estimated 3,200. Poaching, habitat loss and human-wildlife conflicts are the main reasons for the decline of their population. As per IUCN’s estimate, about 60 per cent of the world’s tigers are found in India.

According to Mr. Raghunandan, tigers are extremely important in maintaining a healthy ecosystem which helps in a healthy survival of human beings. He said that protecting tigers does not just benefit them but also conserve other co-habituating species. Tigers play a pivotal role in the health and diversity of an ecosystem being a top predator at the apex of the food chain. Tigers keep the population of wild animals in check, thereby maintaining the balance between prey herbivores and the vegetation upon which they feed and so if the tiger go extinct, the entire system would collapse, says WWF.

Also Read: Decoding Climate Change And Its Impact On Health

According to the Ministry of Environment, Forest and Climate Change (MoEFCC), Government of India, Dugongs is one of the most seriously endangered species of large mammals in the country. Dugongs are restricted to coastal shallow marine habitats and grazes on the sea grass meadows in coastal waters and are therefore called “Sea Cows”. As per the Ministry, there are about 1 lakh Dugongs globally and only 250 in India. It was added to IUCN list in 2015 as vulnerable to extinction. The major threat to Dugongs is the degradation of seagrass habitat, poaching for their meat, oil, hides, bones and teeth, pollution, water transport traffic and fishing.

The presence of thriving population of Dugongs indicates healthy Seagrass Habitat in the marine system. According to Waterman of India, Dr. Rajendra Singh, seagrass has the capacity to capture carbon from the atmosphere and thus help in combating climate change. Seagrass grows more and in better quality because of the constant trimming done by Dugongs as they eat it.

Over the last 200 years, human activities have made Sea Turtles vulnerable to extinction, according to WWF. The Sea Turtles face threat from poaching which is done for their eggs, meat, skin and shells, in addition, habitat destruction, plastic pollution in oceans, accidental entangling in fishing nets (also known as bycatch) and trash on the beaches also cause their deaths. Six of the seven sea turtle species are classified as threatened, endangered, or critically endangered. There has been a 90 per cent population decline of a species of Sea Turtle called Leatherbacks, over the last 30 years. The leatherback is the largest sea turtle and can weigh up to 2,000 pounds.

Sea Turtles are a fundamental link in Marine ecosystems as they help in maintaining the health of seagrass beds and coral reefs and provide a healthy habitat to a number of marine species, says WWF. Sea Turtles also provide food for animals both on shore and at sea. In the sea they carry around algae and other organisms that are eaten by fish and shrimps which are further consumed by humans. On shore, as Sea Turtles nest and hatch eggs, they improve vegetation of the beach dunes by providing essential nutrients like nitrogen, phosphorus and potassium. The plant growth stabilises the shoreline and provide food source to land animals. According to the Sea Turtle Conservancy, a Florida based non-for-profit organisation established in 1959 with an aim to save Turtles, it the Sea Turtles went extinct, both marine and beach would be negatively affected and since humans utilise these ecosystem as a natural resource for food, it will negatively affect humans.

According to MoEFCC, the Gangetic or River Dolphin is one of the most endangered species found in the rivers Ganga, Brahmaputra and their tributaries. It can live only in freshwater. The River Dolphins are threatened by hunting for their meat and oil, apart from pollution, bycatch, sea transport traffic and habitat loss. As per WWF, the population of River Dolphins currently comprises of only 1,200-1,800 individuals.

Dr. Singh said that River Dolphins are the symbols of the ecological health of our freshwater systems which is essential for the survival of humans.

Dr. Singh asserted that humans are the most dangerous species in global history and are responsible for the declining population of a wide variety of species for decades. The experts recommend that preserving large intact areas and minimising contact with wildlife would go a long way in conserving these species and preventing the potential human suffering associated with their extinction.