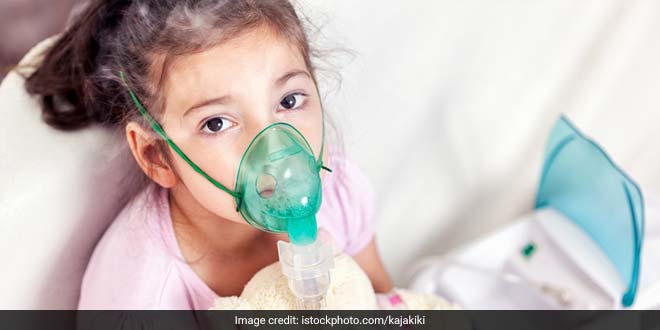 New Delhi: Every third child in Delhi has impaired lungs, a research and advocacy body here said on November 27 in a new study, which also probes some of the yet-unexplored links between air pollution and a person’s mental health. The study has come a few days after the air pollution in Delhi and neighbouring cities had risen to alarming levels, prompting a public outcry and forcing authorities to resort to emergency measures to contain the worsening situation.

The air quality in Delhi again slipped back to being “very poor”, which can cause respiratory illness on prolonged exposure. The Delhi government today issued a health advisory, urging people to avoid stepping out during the early morning and late evening hours.

The report by the Centre for Science and Environment said air pollution causes 30 per cent of all premature deaths in India. In 2016, it said, 35 million people across the country had chronic asthma, a lung disease that inflames and narrows the airways.

Every third child in Delhi has impaired lungs while air pollution causes 30 per cent of all premature deaths in the country, the report ‘Body Burden: Lifestyle Diseases’ said.

It claimed a crucial link exists between the environment and health, some of them yet-unexplored such as the connection between air pollution and mental health. It also investigates and exposes the new and emerging environmental triggers of non-communicable diseases (NCDs).

The report sought to establish that unless environmental risk factors were acknowledged and dealt with, India will not be able to curb non-communicable diseases. It said more than 61 per cent of all deaths in India are attributed to lifestyle or NCDs.

The World Health Organisation has identified four major risk factors for NCDs – alcohol, tobacco, poor diet intake and lack of physical activity – but it fails to call out the “real enemies” that have high salt, sugar and fat content but are low in nutrition, said CSE director general Sunita Narain.

(The WHO) wants to play it as safe as possible so that it does not have to confront the real players and demand a restraint on their products, not through voluntary action but through government policies that restrict and restrain and put a premium on nutrition, not consumption, she said in a statement.

According to the statistics cited in the report, more than 1.73 million new cancer cases were likely to be recorded each year by 2020 with air pollution, tobacco, alcohol and diet change being the “primary triggers”.

Every 12th Indian is a diabetic, pushing the country to the second rank in the list of countries with highest diabetes patients. More than 2.7 million people in India die of heart diseases every year, with 52 per cent of them below the age of 70, the report stated.

Ms Narain said India will need higher investment in the health sector to prevent illness and deaths caused by NCDs, due to multiple risk factors. The WHO says that by investing only USD 1-3 per person per year, countries can “dramatically reduce” impact of NCDs.

Also Read: Environment Challenges We Confront Are Progenies Of “A Conspiracy Of Silence”: Environmentalist Sunita Narain