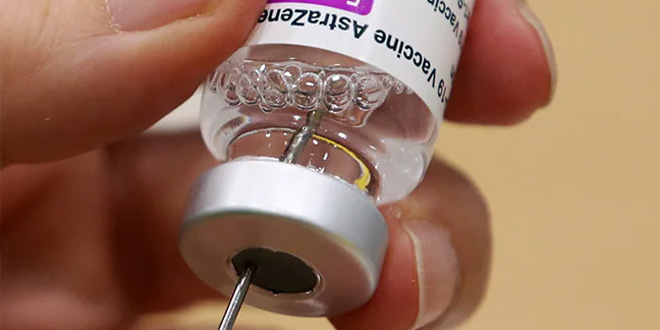 Frankfurt/Paris: Europe’s medicines watchdog concluded on Thursday (March 18) that AstraZeneca’s coronavirus vaccine still far outweighed any risks after investigating reports of rare blood clotting disorders but said it would add a warning to the product leaflet. “A causal link with the vaccine is not proven, but is possible and deserves further analysis,” the European Medicines Agency (EMA) said. The World Health Organization has previously also said there was no proven link and that the benefits far outweighed any risks.

At least 13 EU member states including Germany, France and Italy have suspended use of the shot pending the outcome of EMA’s probe. Here’s what we know so far:

More than 45 million shots by various manufacturers have been administered across the EU and the European Economic Area since vaccinations started almost three months ago. The AstraZeneca vaccine was given to 5 million people in the EU.

EMA said it had reviewed seven cases of blood clots in multiple blood vessels, called disseminated intravascular coagulation (DIC) and 18 cases of cerebral venous sinus thrombosis (CVST) in people who had received the AstraZeneca shot, most of whom were women.

In Germany, eight people have been diagnosed with CVST within about two weeks of vaccination among the 1.6 million recipients of the shot as of Wednesday, according to the health ministry. Normally 1 to 1.4 cases would have been expected during that time, the ministry added.

Germany’s vaccine authority Paul Ehrlich Institute (PEI) has said the majority of the cases were young to middle-aged women and that there had been three deaths.

What Have Other Countries And Astrazeneca Said?

In Britain, where more than 11 million doses of the AstraZeneca vaccine have been administered, the medicines regulator said on Thursday it was investigating five cases of CVST among recipients but it reiterated that the benefits of the shot far outweighed any possible risks.

Canada has said health experts are sure all COVID-19 vaccines being administered in the country are safe, including AstraZeneca’s.

AstraZeneca said on Sunday a review of safety data of more than 17 million people vaccinated in the United Kingdom and European Union with its vaccine had shown no evidence of an increased risk of blood clots.

What Was The Ema Investigating?

EMA investigators checked if the frequency of incidences was higher in the vaccinated population than normal background rates.

The normal frequency is drawn from public health statistics or insurance records. This would be combined with a medical analysis of each case and insight from scientific literature.

EMA’s head of safety monitoring, Peter Arlett, said on Tuesday the rarity of CVST meant the watchdog would have to rely more heavily on case-by-case analysis rather than on statistical data.

A spokeswomen for Germany’s vaccine authority, which is part of the investigation, said prior to the safety review that EMA would not rule on causality.

Instead, EMA would assess the likelihood of an increased risk of the condition and weigh that against the benefits of fighting COVID-19.

For example, the vaccines developed by Pfizer and Moderna have been linked with increased risk of anaphylaxis, but they are still recommended because benefits outweigh the risks of the side effect, which can be treated.

What Did The Clinical Trials Show?

AstraZeneca and European regulators have said that concerns about blood coagulation disorders did not emerge during human trials.

Safety monitoring after approval is key because extremely rare side-effects, or those affecting only a small subset of the population, are near impossible to identify during clinical trials, according to Germany’s PEI.

Are There Precedents Of Vaccine Safety Scares?

In Japan, a governmental recommendation for use of human papillomavirus (HPV) vaccine to prevent cervical cancer has been suspended since June 2013, due to media reports of an alleged pain syndrome. This has drawn criticism from the WHO.

A study published in The Lancet Public Health last year concluded a continued suspension would lead to thousands of cancer deaths over the next decades.

In Ukraine, deep mistrust of vaccines has allowed measles to grow into an epidemic. Vaccine hesitancy there is rooted in corruption and mistrust of authority but also in a temporary government suspension in 2008, when a 17-year-old boy died shortly after receiving a measles-rubella vaccine.

Wider Image Seen From The Sky: Polluted Waters Around The World

India Has Already Witnessed Multiple Big Forest Fires This Year: Here Is All You Need To Know About Wildfires