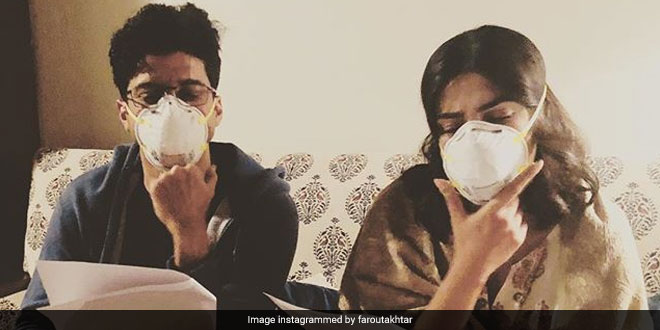 New Delhi: Actors Farhan Akhtar and Priyanka Chopra battle with national capital’s choking air pollution as they shoot for their upcoming movie The Sky Is Pink in New Delhi. On Monday, showing how the duo is struggling to breathe some clean air, Farhan Akhtar shared a picture from the film sets in which he and Priyanka Chopra are seen wearing masks as they read scripts.

“Masking our emotions in the Delhi air. @priyankachopra your pose is just ✅,” Farhan Akhtar captioned the picture.

Responding to the picture, Priyanka Chopra also commented: “Arre Delhi .. what has happened to you?”

This year, Air pollution levels skyrocketed in New Delhi after Diwali, as the Air Quality Index (AQI) breached to 999 in some parts of New Delhi (the maximum level the monitors can record), that’s almost double the upper limit of what’s considered ‘hazardous’, while an AQI between 0 and 50 is considered good, 51 and 100 satisfactory, as per World Health Organisation.

And since then the air quality in the city has been lingering in the ‘very poor’ and ‘severe’ categories. According to experts, a combination of unfavourable weather conditions, firecrackers used during Diwali and increased stubble burning in Punjab and Haryana are the likely causes for the increase in air pollution.

Data from Central Pollution Control Board (CPCB) shows that the air quality in Delhi remained ‘severe’ on Monday, despite measures like an extension of the ban on the entry of trucks, construction and polluting industries. The overall air quality index (AQI) in the national capital was recorded at 406 with prominent pollutants that are considered very harmful to health – PM2.5 recording 263 while the PM10 recording 457.

Apart from Farhan Akhtar and Priyanka Chopra, from time to time, other actors like Dia Mirza, Parineeti Chopra and Arjun Kapoor too have voiced their concern on rising levels of air pollution in the country and have demanded actions from the authorities.

This year, during NDTV’s Banega Swachh India 12-Hour cleanathon on October 2, actor Parineeti Chopra and Arjun Kapoor voiced their concern about the deteriorating levels of air in India. Parineeti said,

I am 29 years old and that is not such a long lifespan but the deterioration all around in terms of the environment is worrying. I worry the world my children will grow up in. Where will the world be 15 years from now, if we continue the same way.

Last year, we were shooting in the North during winters and it was terrible. Because of smog, people on the set were falling sick, the crew had difficulty in breathing. It was just not a great atmosphere to live.

In the same month, when the Air Quality Index in major cities of India – Delhi and Mumbai took a turn for the worse yet again, actor and goodwill ambassador of United Nations Environment Programme (UNEP), Dia Mirza said, ‘our fundamental right to live is threatened every day.’

She questioned the authorities on why nothing is being done about the poor air quality of India and why it is the same scenario every year.

It’s only October and the #AQI is rocketing. This is what is making us sick. Very very sick. Our parents, our children, you and me. Our fundamental right to live is threatened everyday that the air remains polluted and we do nothing about it. #MyRightToBreathe #BreatheLife pic.twitter.com/zVNuYu8hoq

How Air Pollution Is Killing The Planet

PM2.5 and PM 10 pollutant are tiny particles that can enter the lungs and bloodstream and cause serious harm to the human body. According to the World Health Organization, smog kills more than one million Indians every year and the national capital region has been tagged as the ‘most polluted’ city than any major city on the planet.