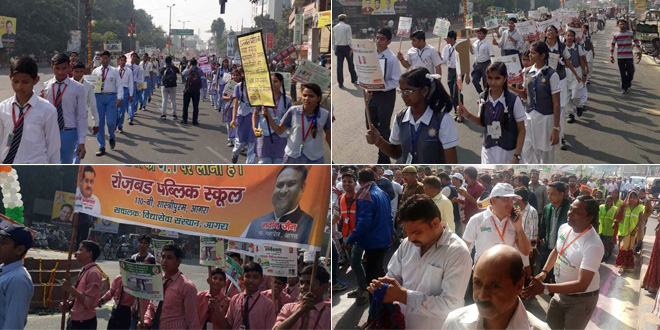 New Delhi: Holding placards and banners with messages for a cleaner Agra, thousands of residents of the Taj city participated in a march organised by Agra Municipal Corporation on Monday. More than ten thousand people including seven thousand students and hundreds of residents, social activists, politicians and sanitary workers participated in the march to promote cleanliness in the city, informed Kishori Singh, Assistant Engineer, Agra Municipal Corporation. The participants assembled at the ground of Agra College from where they paraded to the municipal corporation headquarters in Civil Lines.

Also Read: On A Mission To Clean Agra’s Roads, Here’s What Inspired Four Friends To Get Started

For the first time in Agra, dozens of special motor vehicles fitted with equipments, tankers, dumpers, and cranes and other equipments for cleaning the city, were exhibited during the citizen’s parade. Uttar Pradesh Urban Development Minister Suresh Khanna, the chief guest, administered an oath of total cleanliness of India’s most popular tourist destination: “We will make cleanliness a part of our life”. The Minister in his address, congratulated the people who participated in the rally and called for high participation from the people and local administration authorities of Agra in the ‘Swachh Ward’ contest to be held in the State of Uttar Pradesh from November 15 to December 15. He added that the best performing wards will be awarded on December 23 at the District level and on December 25 at the State level. 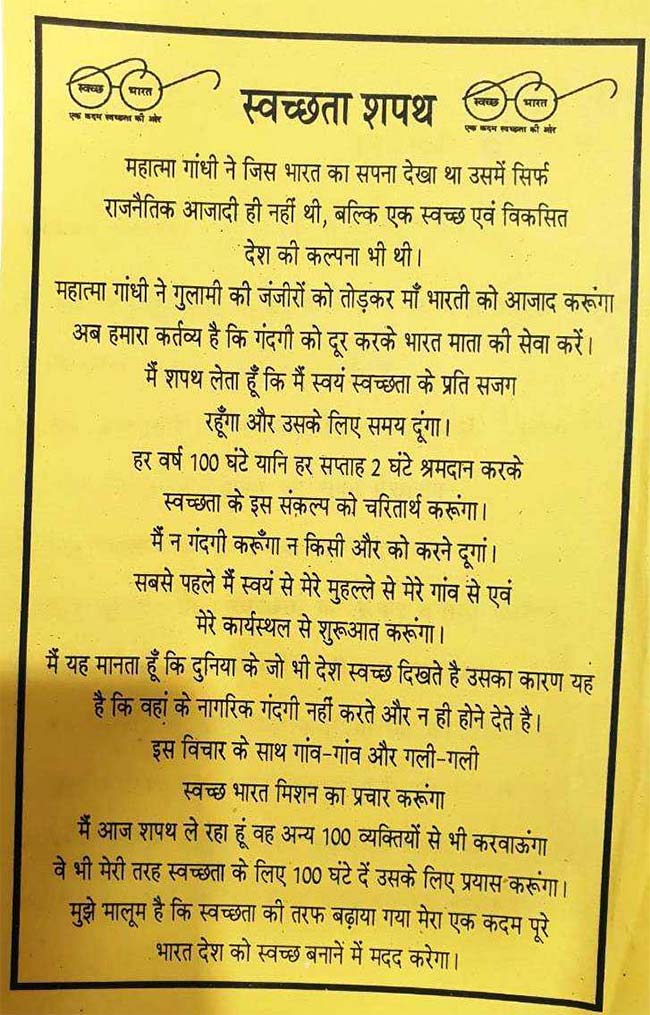 Our city is home to Taj Mahal, one of the classic Seven Wonders of the World, but it has also been declared as one of the dirtiest cities in the country many times. The condition, however, has started to change. We marched through the city to make people aware that only the people can bring the real change that they want to see, a cleaner and more beautiful Agra.

During the rally, the Mayor Naveen Jain expressed his concern over the status of cleanliness in the city and made a commitment to ensure that no part of the city remains dirty any longer, informed Mr. Singh. More than 16,000 public toilets have been built. The city has been declared open defecation free (odf) city. The city generates around 700 tonnes of garbage daily and to handle this waste the municipal corporation has set up new garbage collection centres and door to door collection of garbage has been started in several colonies, informed an official of Agra Municipal Corporation.

Meanwhile, social activists welcomed the initiative but were of the opinion that such campaigns needed to be held more often to spread awareness, and some residents and social activists questioned the relevance of the government-sponsored rally which they said was a sheer waste of resources. Pandit Jugal Kishore, a member of River Connect Campaign said, “Cleanliness has to be started from our own homes, and we as citizens need to take the responsibility, of keeping our city clean, very seriously.” He added that maintaining cleanliness was not the responsibility of the administration alone and that every segment of the society must contribute towards the cause. Shailendra Bhadauriya, a social activist in Agra said, “Efforts of the Municipal Corporation towards resolving the issues of cleanliness are limited only to carrying out awareness programmes, and there is a lack of on-ground efforts. One can see garbage everywhere in the city.”