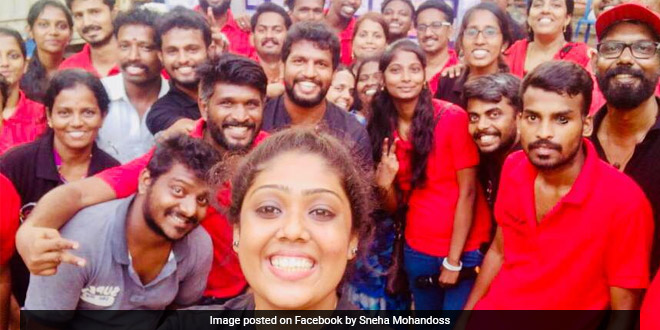 I feel empowered when I do what I’m passionate about! I wish to inspire my fellow citizens, especially women, to come forward and join hands with me. I urge everyone to feed at least one needy person and contribute to a hunger- free planet.

Also Read: My School, My Farm: This IAS Officer’s Brainchild Has Led To A Poshan Revolution In A Remote Mizoram District

Sneha Mohandoss, a 23-year-old visual communication student currently working in an events management organisation, is running FoodBank-India initiative to connect people who want to help the homeless with home-cooked, nutritious food in Chennai. She tweeted from the Prime Minister’s account,

I work with volunteers, many of whom are outside India, to work towards eradicating hunger. We have over 20 chapters and have impacted several people with our work. We also initiated activities like mass cooking, cooking marathons, and breastfeeding awareness drives. You heard of food for thought. Now, it is time for action and a better future for our poor. Hello, I am @snehamohandoss. Inspired by my mother, who instilled the habit of feeding the homeless, I started this initiative called FoodBank-India.

She tweeted a video mentioning the work she has done through her organisation.

You heard of food for thought. Now, it is time for action and a better future for our poor.

Hello, I am @snehamohandoss. Inspired by my mother, who instilled the habit of feeding the homeless, I started this initiative called Foodbank India. #SheInspiresUs pic.twitter.com/yHBb3ZaI8n

Ms. Mohandoss said she started the Food Bank in 2015 before the Chennai floods and the basic aim was to fight hunger and to create a hunger-free nation. Sneha Mohandoss said in the video

I want to connect with the younger generation. It all started through Facebook — the social media, the virtual world. My concept is to connect people with Facebook and bring them on the field.

Mohandoss said that she started Facebook page called ‘Food Bank-Chennai’ and people soon took inspiration and got in touch with her to follow the same pattern in their respective states. She said,

So far, we have over 18 chapters in India — including one in south India. We aim to provide fresh and nutritious meal to the homeless people because they deserve a good and hot meal.

Explaining her work, she said that they undertook cooking regular food and then the mass cooking.

“We collect all raw material. We don’t collect money. We have volunteers who go down to the fields. We have hunger spots where we go and talk to people about their problems. Ms. Mohandoss said,

We make sure to keep them in shelter. We buy things which they can further sell and earn their own money. I ensure that all my volunteers get credit. My success mantra is that ‘share success and never hold the success’

In another tweet, she said she has been using Prime Minister’s handle to spread awareness and sought people’s help to remove hunger and ensure that food doesn’t go waste.

I’m using the PM’s handle to spread awareness on the need to remove hunger. Will you and others help me? It’s simple. Feed the needy, ensure no food goes waste.

Thanking those who wished and greeted her by retweeting her tweets on the PM’s handle, Sneha Mohandoss urged everyone to adopt steps to make India hunger-free.

I urge you to take similar steps in your community to make India hunger-free. I believe in Mahatma Gandhi’s quote — ‘The world has enough for everyone’s need but not for everyone’s greed’.

Mohandoss shared her achievements on Twitter soon after the Prime Minister logged out of his social media account as promised by him last week, announcing that it would be used by seven women achievers on the International Women’s Day.

Before tweeting from Prime Minister’s handle, the Chennai-based young woman tweeted from her @snehamohandoss account, saying,

I am signing off from this account. I will be tweeting from @narendramodi, hon’ble PM’s account. Thanks for the motivation.