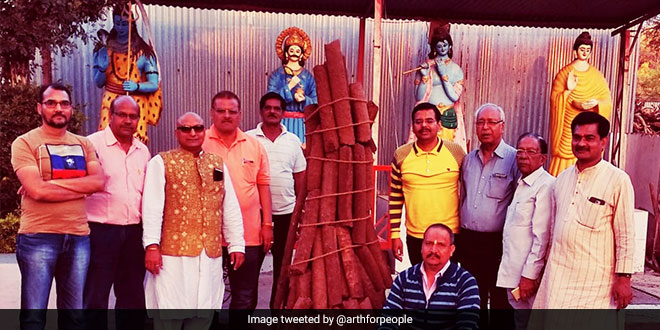 New Delhi: The festival of Holi celebrates the arrival of spring. According to Hindu mythology, the eve of Holi is associated with an ancient legend that signifies the triumph of good over evil. On this day, bonfires are lit across the country to commemorate the deliverance of Prahlad from his evil father and aunt (Holika) who sat on fire with him in order to burn him but was herself let to death instead. In many parts of India, the ritual of lighting bonfires or ‘holika dahan’ is done using wooden logs which not only results in cutting of trees but also increases air pollution. In order to reduce pollution caused by burning of wooden logs during ‘holika dahan’ and to save trees from being cut for this, a group of students from IIT (Indian Institute of Technology)-Delhi have designed logs made from cow dung and have distributed these logs in several housing societies across Delhi-NCR.

IIT-Delhi has partned with 14 residential colonies in Delhi, Ghaziabad, Noida and Faridabad and have provided them cow dung logs. In total 2500 kilograms of these logs will be used today for ‘holika dahan’. While talking about the initiative, Ritika Chaplot, a student from IIT-Delhi said,

Just think how much wood will be burnt today during the ‘holika dahan’. We are celebrating the triumph of good over evil but in a way we are all doing a wrong deed- of cutting trees and generating so much amount of air pollution. In order to provide a solution for this, we have designed an eco-friendly alternate to wooden logs that are made of cow dung and we call these ‘Arth Logs’. This has been done under project Arth which has been already working towards reducing air pollution caused during cremations since 2018 and this is the first time we are using Arth logs for ‘holika dahan’.

According to Ms. Chaplot, project Arth is an initiative of Enactus, an environmental think tank based in the United States of America that works towards devising more practical and low-cost solutions to environmental issues. She said,

Under project Arth we aim to reduce deforestation. For this, we have started with providing alternatives to wood like cow dung logs. Through this initiative we are also trying to contribute to waste management as most of the time, the cow dung from ‘gaushalas’ (cowsheds) are just thrown away in open that pollutes the environment.

She further said that for making Arth Logs, the group has used cow dung to make wood like logs which are then dried out in the sun to remove the moisture in the logs. IIT-Delhi has helped 15 ‘gaushalas’ in establishing manufacturing units to produce Arth logs which are further helping these ‘gaushalas’ in income generation. Each manufacturing unit is able to process 500 kilogram of cow dung at once. The Arth logs made in the ‘gaushalas’ which are sold in the market at Rs. 8 per kilogram and the revenue earned from this goes for operation and maintenance of the ‘gaushala’.

Dr. Y K Saxena, Scientist at the Central Pollution Control Board (CPCB), who has collaborated with the team and is implementing the same initiative in Bhopal told NDTV that eco-friendly alternatives like these can help in tackling the problem of air pollution and poor waste management. He said,

We are glad to partner with Project Arth. There is already a problem of pollution that exist around Delhi and with our initiative, we aim to solve the dual purpose of Pollution as well as cow dung waste management. In this quest of ours, we are also serving Gau Mata by utilising their produce in a meaningful manner. In burning our logs we are producing more ashes than the traditional wood logs, thus reducing the amount of emissions released. We wish to work even harder for a greener and cleaner environment.

While currently, IIT-Delhi has been implementing project Arth only in Delhi, they will be soon expanding to Goa, Odisha, Uttar Pradesh and other states.

Sanitary Pad Manufacturers To Provide Disposal Bags From Next January