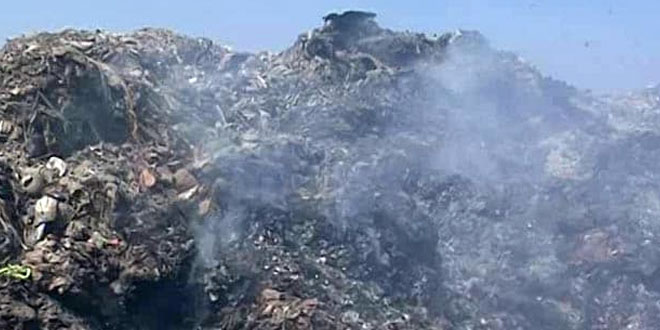 New Delhi: A fire raging at Bhalswa landfill site in Delhi since October 20, which has raised concerns about the air quality in the national capital region further deteriorating, has been “almost” brought under control by evening on Monday, said a Delhi Fire Service officer. The official said firefighting was still going on at the site. Three fire tenders were engaged and the fire has been “almost” brought under control, he said. The fire has raised concern that the pollution levels in Delhi might further drop.

Delhi’s air quality showed signs of improvement Monday as it moved from ‘very poor’ to ‘poor’ category, but experts said it might deteriorate in coming days due to the toxic air coming out of the fire at Bhalaswa landfill site.

Meanwhile, Delhi Environment Minister Imran Hussain has expressed serious concern over the fire, since Delhi is already fighting the adverse impact of stubble burning in neighbouring states. He directed officials of the Delhi Fire Services to depute one fire tender exclusively to put out future incidents of fire at Bhalswa landfill site.

A North Delhi Municipal Corporation official said, We always keep a fire tender stationed there in case any fire occurs. In today’s case, we do not know yet if the fire occurred on its own or a cigarette or ‘bidi’ triggered it. We are on standby.

Anumita Roychowdhury of the Centre for Science and Environment said toxic air emanating out of such landfill fires is likely to affect the air quality in Delhi as winter approaches.

If the wind speed is lower and the temperature dips, the polluted air coming out of the landfill fires will get trapped, which would severely affect the air quality, she said.

They must do it quickly as winter is close by, and fires during winter will make matter worse. Bhalswa fire can recur so, civic authorities must take action urgently, she said.

Bhalswa landfill site falls under the jurisdiction of the NDMC. The nearly 50 metre-high heap at Bhalswa is already saturated way beyond its capacity.