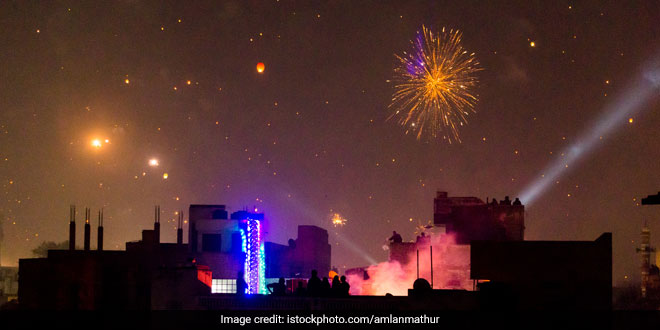 Mumbai: Remember to set an alarm this Diwali if you are residing in Ahmedabad and want to burst firecrackers. If you exceed the 2-hour time limit between 8pm and 10pm set by Supreme Court for bursting crackers then you could end up in prison. The stringent step is a part of Ahmedabad City Police’s plan to promote an eco-friendly Diwali among citizens and curb air pollution.

The issue of air pollution is not confined to the northern parts of India, even cities like Mumbai and Ahmedabad are a victim of toxic particles released due to bursting of crackers. The air quality index (AQI) in the city slipped to poor category post the Diwali celebrations last year. To avoid a similar turmoil, we want to effectively implement Supreme Court’s decision. It is challenging for us to restrict people to a mere two-hour period considering that people the celebrations go on till the wee hours of the morning. Thus, we have come up with stern action of imprisonment, said a police officer from the department.

Citizens who are found bursting crackers outside the allotted time-slot will be booked under Indian Penal Code Section 188 that invites one-month jail and a fine Rs 200 or under section 135 of the Gujarat Police Act that mandates four months to one year of imprisonment.

The police personnel will patrol the city round the clock to prevent any kind of violations. The authorities will also encourage citizens to register complaints by dialing 100 if they find anyone violating the Supreme Court order. PCR vans will be kept on stand-by across the city to act on the complaints.

The police authorities will also conduct awareness activities in public places and educational institutes to spread the message of green and clean Diwali. The Ahmedabad City Police has collaborated with the Amdavad Municipal Corporation (AMC) to reach out to maximum number of people.

The city has a population of around 55 lakh and a few thousand police authorities cannot man the entire city. Children are best way to spread a message. Awareness drives asking students to pledge for a green Diwali are being carried out in schools and colleges. The students have to undertake an oath that they will cater to all the norms listed by the Supreme Court, explains a police personnel.

Diwali Special: Give Your Home Décor An Eco-Friendly Twist With These 5 Super Easy DIY Ideas