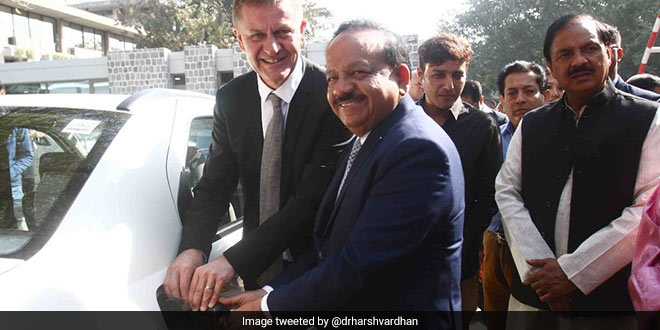 New Delhi: To encourage adoption of electric vehicles (EV) and curb vehicular emissions, first electric car charging facility of Delhi was inaugurated on Monday, at United Nation Office in Lodhi Estate by the Environment Minister – Dr Harsh Vardhan, Minister of Culture – Mahesh Sharma, the UN Environment Head – Erik Solheim, and other dignitaries. Sharing glimpses of the event with netizens, Dr Harsh Vardhan added, “Inaugurated the 1st electric car charging facility in any UN office in India, at its regional Headquarters at Lodhi Estate in the presence of my colleague Dr Mahesh Sharma & UN Under Secretary General, Executive Director of #UNEnvironment @ErikSolheim. Later travelled on electric cars to my office.”

Inaugurated the 1st electric car charging facility in any UN office in India, at its regional HQrs at Lodhi Estate in the presence of my colleague Dr Mahesh Sharma & UN Under Secy General, Exe Dir of #UNEnvironment @ErikSolheim. Later travelled on electric cars to my office. pic.twitter.com/bFQVx7pT6M

This move is part of the plan to develop EV charging points across the country. The charging point that has been set up has three sockets to charge up to 15A per socket (or 3.3KW).

The move comes at a time when the Union Government is considering switching of all cars to electric vehicles by 2030. Currently, the infrastructure to run electric vehicles in India remains on the lower side, as there are low numbers of charging stations.

Dr Mahesh Sharma, speaking on the occasion, emphasized on the need to have more and more electric vehicles and said that the protection of environment is the call of the day; it is the call of humanity; for the whole world and especially when we talk of India. He further added,

As a doctor, I understand the predicament that pure air in Delhi and several other smart cities would be scarce not too far, if we don’t mitigate the causes of pollution.

On the other hand, Erik Solheim lauded the steps taken by Prime Minister Narendra Modi in steering the debate on environmental issues, he added,

Today the narrative has changed to “How can we develop and take care of the environment rather than ‘does India want to develop.

Earlier in the day, Dr Harsh Vardhan and Erik Solheim signed the ‘Letter of Intent’ and declared India as the global host for the 44th World Environment Day celebrations.