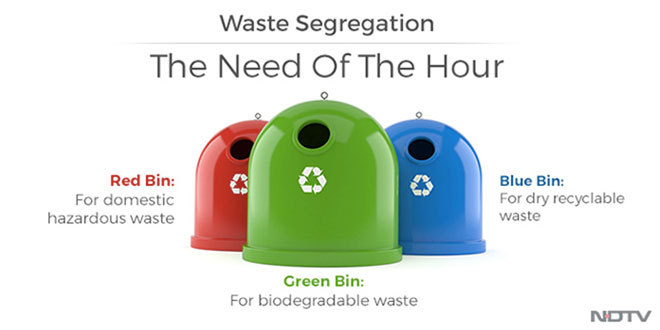 New Delhi: In a bid to accelerate the implementation of segregation of waste at source, Center for Science and Environment (CSE) launched ‘Forum of Cities that Segregate’ on December 12, 2017. Under the initiative, 20 cities and municipalities from 13 Indian states have pledged to segregate 100% of their waste at source by October 2, 2019. With the forum of cities that segregate, CSE aims to implement waste segregation with the help of practitioners and make waste segregation at source an easy task by assisting municipalities in building their capacity.

“We (India) are a frugal economy, we know waste is a resource, we only need to practice what we already know. Forum of cities that segregate is a forum to creating that practice, a support system that uses practitioners’ knowledge by bringing them together in one place”, says CSE Director General, Sunita Narain.

We (#India) are a frugal economy, we know waste is a resource, we only need to practise what we already know. #ForumofCitiesthatSegregate is a forum to creating that practise,a support system that uses practitioners’ knowledge by bringing them together in one place @sunitanar pic.twitter.com/gx9XoBBN0r

Ms Narain who has been supporting the cause of waste segregation says,

From collection to disposal of waste, cities are struggling to implement an affordable and sustainable model. On the other hand, the amount of waste generated is increasing every day.

She also noted that Urban India alone generated 1.5 lakh metric tonnes of municipal solid waste per day and this whopping amount increases by 5% every year.

On June 5, on the occasion of World Environment Day, the Union Ministry of Housing and Urban Affairs launched a country-wide campaign on source segregation of municipal waste. Former Union Minister of Urban Development M Venkaiah Naidu urged people to participate in this campaign.

Also Read: India Gears Up For The World Environment Day 2017, Launches Waste Segregation Campaign. Here’s All You Need To Know

At the launch of the forum, different cities shared the way they manage their waste. Like, Indore sends sanitary napkins and diapers to bio-medical facility for incineration. The city has also initiated door-to-door waste collection and has distributed composters to households to promote segregation at source.

Around 50% of the families in Thiruvananthapuram, the capital state of Kerala have the facility to segregate waste at home. “5,000 bio gas plants have been provided, soon to begin collection of bio-medical waste from households”, says Thiruvananthapuram Municipal Corporation.

800 tonnes of waste is generated in Gurugram alone. The city has five composting plants and it will soon begin using dry waste to generate power so that it does not end up in landfills.

India generates 62 million tonnes of garbage annually out of which 45 million tonnes of waste goes untreated. This means, 75% of the municipal solid waste is being dumped openly in our country. If India continues with this practice, then by 2050 we will need dumping land equivalent to Mumbai, Hyderabad and Chennai. With each day, the figure of garbage pile up is increasing and is worsening the situation.