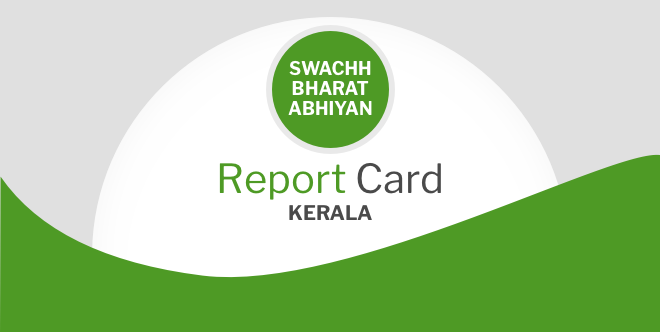 New Delhi: The south Indian state of Kerala has always remained ahead of the curve in meeting its Swachh Bharat Mission targets – in the year 2016, Kerala which has the majority of its population residing in rural areas became the first high density populated state in the country to achieve an open defecation free target. In 2017, the state set another target for itself – one to declare its urban parts open defecation free by October 2, 2017 and second to go 100% waste free by October 2, 2018. But, for the state year 2018 proved to be a difficult one due to the fierce floods in the beginning of the month of August that are said to be the worst in the last 100 years. Kerala floods had claimed 493 lives since the onset of the South West Monsoon on May 29, besides leaving a trail of destruction that saw nearly 14 lakh people displaced from their homes thereby halting state’s urban areas ODF dream and zero-waste target.

For urban areas to be declared ODF construction of some hundred toilets is left, the state missed its October 2017 deadline because more than toilet construction, Kerala was focusing on achieving the overall ODF sustainability status and effective waste management chain. Though the new target for urban areas was kept for January 2018, but unfortunately the year proved to be a difficult one, said a senior urban official of Suchitwa Mission stressing for now the government is only targeting the clean-ups in different flood-hit regions. 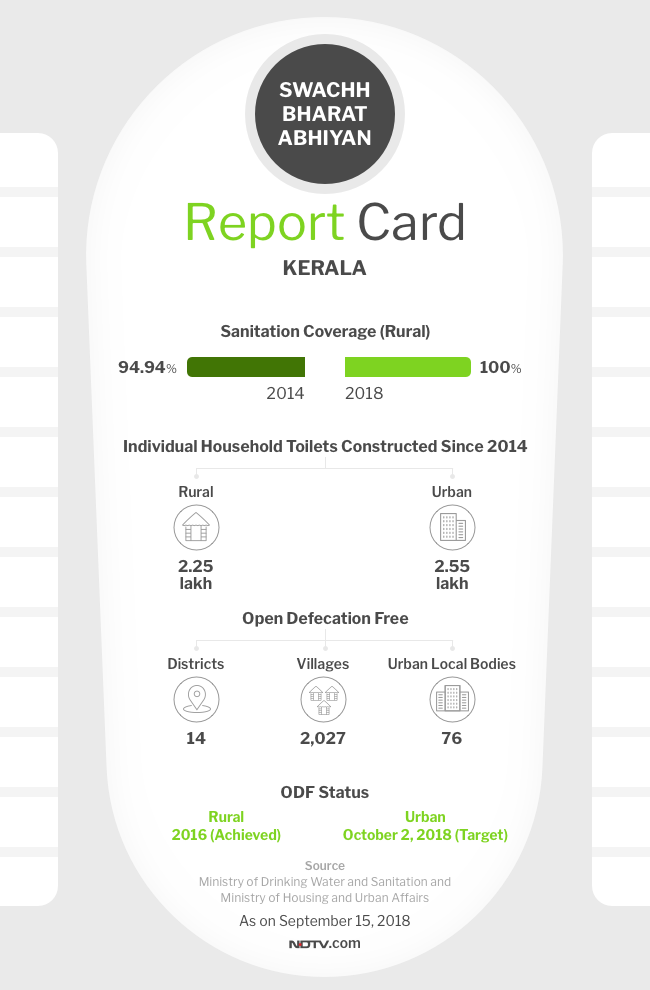 Kerala with a population of 3.3 crore was the third state to attain the title of open defecation free back in 2016. It is that year, when in order to give swachh push in the state, Kerala launched its own swachh bharat initiative in the name of Haritha Keralam. The state achieved the mammoth task of by constructing more than 2 lakh individual toilets (2,25,618) in its rural regions and successfully declared 2,027 villages, 152 blocks and 152 districts ODF. In its urban counterparts, since the inception of Swachh Bharat Mission in 2014, around 2 lakh toilets (2,55,335) individual toilets and 17 thousand community toilets have been constructed. Urban areas such as Thrissur and Kozhikode corporations have already been declared open defecation free, while Thiruvananthapuram Corporation which has completed the self-declaration procedure is yet to get the nod from the centre for third party inspection and Kochi is yet to be declared ODF.

Every year, on November 1, which is also Kerala’s foundation day, the state aims to achieve something ‘Big’ in its Swachh mission, last year, setting the ground high, the state declared its goal of making the state India’s first zero-waste state in next one year. As a part of Haritha Keralam, the state issued a ‘Green Protocol’ wherein hotels were asked to stop the usage of plastic straws, education board was asked to pass a mandate for students that they will only use fountain pen and not plastic pens and common citizens were made aware about the concept of ‘Green Weddings’ where the usage of plastic and other non-degradable articles including disposable glasses and plates and thermocol decorations in the weddings are prohibited.

These initiatives were taken to move towards the concept of zero-waste state. Last year, on August 15, we decided to make Kerala free from waste. We asked all the villages, gram panchayats, blocks to come up with solutions on how their area can reduce waste and go waste free. We have started receiving reports by the different areas on the plans, but due to unfortunate circumstances in the state this year, the progress of moving towards a zero-waste state has been put to hold. The current focus by all of us is to rebuild Kerala in some way or the other, added District Collector of Kannur District, Mir Mohammed Ali.

Also Read: Concerned By The Waste Disposal Methods, This Man From Kerala Is Showing India How It Can Tackle Its Growing Garbage Crisis

Kerala Floods: The Challenges And Activities Being Done To Re-boost State’s Swachh Mission

As a first step, the Kerala government has taken up the massive task of cleaning houses and public places filled with waste that has been left behind by the massive deluge. The government has also set up a control room in Thiruvananthapuram to coordinate the cleaning process across the state, even Haritha Kerala Mission has been involved in this mission and has been asked to coordinate the cleaning process.

On the other hand, as a lesson from the recent floods in the state, the High Court has directed the state government to remove all advertisement boards, including flex boards, erected at public places without the permission of local self-government (LSG) authorities. The High Court said, “On one hand Kerala is going all out to promote sanitation and cleanliness under the Swachh Bharat Abhiyan and Clean Kerala Mission, but on the other hand certain areas are filled with the nuisance of these boards which are useless and are hard to dispose off.” The issue of unauthorised flex boards gained importance after the floods, as state’s landfills sites in the regions were filled with these boards and there was hardly any space to dispose of the damaged items of several households.

Even Kerala CM Pinarayi Vijayan has directed the health and local self-government departments to focus on waste management thoroughly and has also directed local bodies not to dispose of waste in water bodies.

According to the civic body officials, currently management of e-waste in the state is a problem, as e-waste generated from flood-affected areas cannot be recycled, and the state has not many resources and time for the segregation process of the e-waste. Currently, the safe disposal of e-waste is utmost important as there many health implications associated with it. The officials are currently pooling and segregating the electronic waste that they can, on the priority basis.

Kerala The Road Ahead

Because of many Swachh initiatives taken by the state in past, Kerala is home to the first plastic-free district – Kannur and Alappuzha, a zero-landfill city which has now become a model for the effective waste management system. Moreover, the Alappuzha municipality has also won accolades for managing plastic waste in its flood relief camp effectively. Experts who have been heading the relief camps at various Kerala locations after the floods also feel because the state and its people know the importance of managing its waste and the waste management rules, the management of garbage after the recent tragedy has been to some amount taken care off well.

The Suchitwa Mission officials sign out with a hope that Kerala in the coming one year will climb back and makeup or this setback.

The road to swachh Kerala is not a long one, we started the swachh battle on the right note. The state was a game changer in India when it comes to leading the battle of open defecation and waste management. Due to unfortunate circumstances there are delays in meeting its swachh targets, but, once the state is rebuild, the goals will be met successfully.

Once Among The Worst Performing States In Swachh Bharat Abhiyan, Jammu And Kashmir Is Now ODF