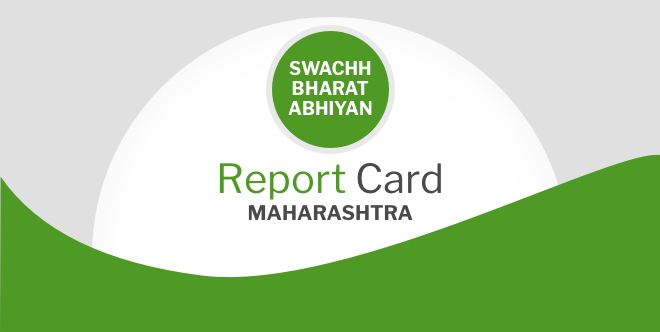 New Delhi: Last year on October 1, one day before the mega celebrations of Gandhi Jayanti, Maharashtra Chief Minister Devendra Fadnavis and President Ram Nath Kovind declared urban areas of the state free from open defecation. Citing the day as a historic moment for Maharashtra, CM Devendra Fadnavis said, “We had decided to make Urban Maharashtra Open Defecation Free (ODF) on October 2, 2015 and since that day we are working towards building an ODF Maharashtra. Today, I am proud to say that we have achieved the mammoth task of declaring our Urban Areas free from open defecation.’

We had decided to make Urban Maharashtra ODF on 2nd October 2015 and it’s a great day today as we have achieved the target.
3 step validation process too got completed before this announcement: CM @Dev_Fadnavis pic.twitter.com/VsxyEh7Oa6

From October 1, the rural counterpart of the state on a daily basis ran many successful campaigns such as 10,000 toilet pits in 24-hours in Osmanabad district to get the ODF title, and then there are the individual efforts of swachh warriors like Aurangabad’s Sumit Pandit, a barber who helped in sensitizing people about building toilets by rewarding them with free haircuts. The result? On April 2018, Chief Minister Devendra Fadnavis declared the rural areas of the state free from the age-old practice of open defecation.

CM Fadnavis said, “In a time of three and a half years, we have built more than 60 lakh toilets in 34 districts, 351 talukas, 21,000 gram panchayats and 40,500 villages. And, I can say with confidence no other state has created as many toilets as we have in these years.” 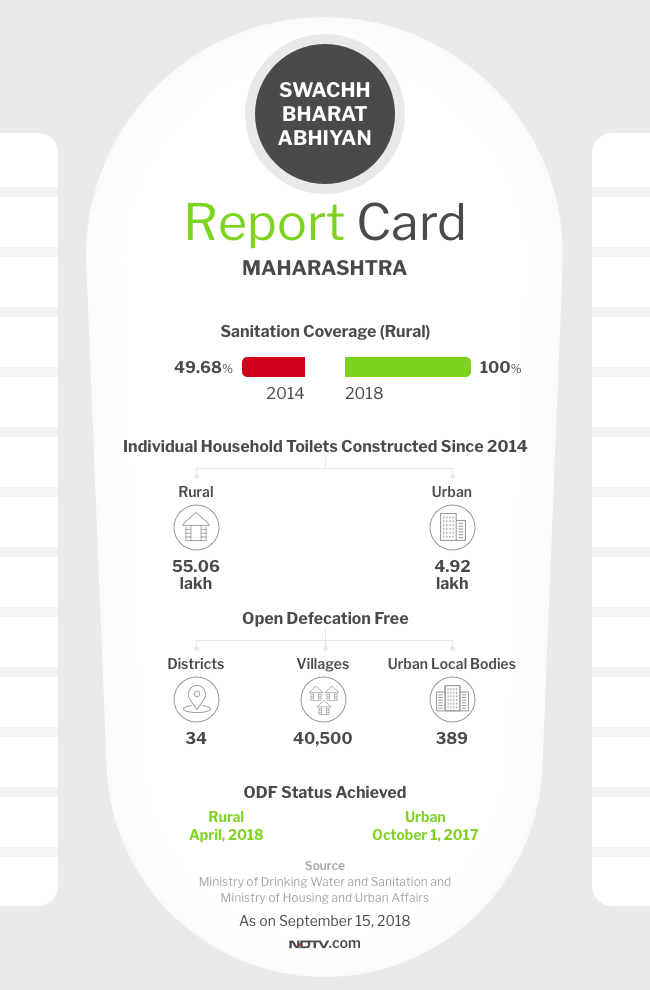 The state has crossed the initial hurdle of ODF, now the government has a bigger responsibility at hand. Talking to NDTV about the state’s plan to inch towards being a 100 per cent swachh state, Dr Uday Tekale, Urban State Mission Director of Maharashtra said,

The focus for now is to sustain the ODF tag and move towards ODF Plus, which refers to total sanitation in terms of solid waste management, improved sewerage lines, storm water drains and pucca cement roads, in addition to open defecation free status. Other major areas in which the urban areas are focusing on are Sewage Treatment Plants, treatment of waste water and scientific segregation. The dream is to make ‘CleanMaharashtra’ a reality.

Dr Uday further added that currently, the urban areas of Maharashtra are undergoing the third party verification process, as of date, 384 urban local bodies have been validated positive in their ODF status and the aim is to complete the whole verification process by October.

We have achieved 100 per cent collection and transportation of waste at an individual level, currently the waste segregation is at 50% and we aim to push this figure to 100 per cent by October next year.

Along with these, 2 to 3 waste to energy clusters in the urban areas of Maharashtra has been proposed by the government in a bid to effectively manage the waste. On the other hand, Vijay Ramakrishna, Rural Swachh officer of Maharashtra added,

Right now, we are focusing on sustainability of ODF tag as we have recently achieved the target. For this we have created a mechanism called ‘ODF Watch’ where swachh warriors will work from morning until the dusk for the next few months, to ensure people use a toilet and do no defecate in the open.

The officer further said that currently the mechanism to convert liquid and solid waste effectively has been put into action in all the common places such as vegetable markets, places of worship and in the coming years, waste management will be implemented at an individual level.

This year, on June 23, India’s second most populous state – Maharashtra banned the use of single-use plastic items such as bags, spoons, forks, cups, plates, glasses, bowls, and container along with disposable thermocol items like plates, glasses, bowls, containers in a bid to move towards a zero-waste state and end the use of plastic completely both at an individual level and at an manufacturing level. As per the notification passed by the Maharashtra government, those found violating the ban would be penalised Rs 5,000 for the first time offense and Rs 10,000 for violation the second time. While the third time offenders would have to shell out as much as Rs 25,000 and may also face imprisonment for up to three months.

Post the state-wide plastic ban, some restaurants in Pune started delivering food in steel boxes that can be returned after the delivery instead of depending on the traditional plastic packaging. On the other hand, 26 societies of Thakur village in Mumbai’s suburb of Kandivali performed last rites and organised an official funeral for plastic items as their contribution to make the ban a success. Recently, impressed with state’s way of effectively implementing the plastic ban, a four-member team from Bihar State Pollution Control Board (BSPCB) visited Mumbai to seek guidance on how to roll out the plastic ban in their state.

Along with the plastic ban, the state is trying out effective waste management systems. For instance, in one of the Mumbai’s posh areas, Pali Hill, 800 kilos of organic waste per day is successfully converted into biogas which generates power to light up 68 street lights in their area. This has happened because of the implementation of the waste-to-energy plant in the area along with the contribution of Mumbai’s civic body Brihanmumbai Municipal Corporation. This plant is estimated to save the civic body ₹14 lakh per annum in electricity bills and transportation cost of carrying waste to the landfill.

To overcome the waste issues in the city, the local civic bodies of Mumbai – BMC and Navi Mumbai Municipal Corporation (NMMC) have also directed the garbage collectors not to pick up waste from bulk waste generators if they fail to segregate their waste and compost the wet garbage.
With ‘My Garbage, My Responsibility’ drive Navi Mumbai is targeting 100 per cent waste segregation by end of this year.

On the other hand, in Pune, just by education and teaching the people the benefits of waste segregation, has seen more than 1 lakh diligently managing their waste effectively. This has been made possible because of the efforts of Pune Municipal Corporation and the city’s largest waste picker’s cooperative, SWaCH (Solid Waste collection and Handling services).

Because of these steps were taken by the state, Maharashtra this year aced the Swachh Survekshan rankings and emerged as the second best-performing state with top honours in 9 categories.

Mumbai (Greater Mumbai) emerged as the cleanest capital city of India, while Navi Mumbai was adjudged the city with Best Waste Management. Nagpur bagged the title of the city that adopted Innovative Techniques And Best Practices, whereas, Bhusawal moved from being the second dirtiest city to being India’s ‘Fastest Mover’. Panchgani that is known as ‘Switzerland of India’ got the tag of Cleanest City In West Zone, Bhiwandi city, was given the title of ‘Fastest Mover City’ in the Medium size city category, Shrendrajanaghat and Parbhani got the title of Best City in Citizen Feedback and Saswad was awarded Best city in Innovation and Best practices (population 1 to 3 lakhs).

From achieving the ODF status to moving towards ODF Plus and a zero-waste state, Maharashtra is leading the Swachh Bharat Abhiyan movement perfectly. In terms of waste management, many regions in the state such as Mumbai, Nagpur, Osmanabad, Solapur, Pune have shown tremendous potential in curbing waste generation by following the basic waste management rules like waste segregating at the source, ditching the use of plastic items and more.