New Delhi: Delhi government has revived the proposal to convert the Rajghat power plant into a waste-to-energy plant by 2017, in order to tackle the shortage of garbage disposal facilities in Delhi.

The Rajghat power plant has been shut since last year to cutdown on Air Pollution.

During a ministerial conference held recently in the capital to discuss ways of handling air pollution and solid waste management, Health and Public Works Department (PWD) Minister, Satyender Jain said, “This seems a viable option to convert the defunct Rajghat power plant into a waste-to-energy plant. If things go as per plan, the proposed waste-to-energy plant will have the capacity to process 4,000 MTD (Metric Tonnes Daily) of solid waste.”

Delhi is producing close to 10,000 tonnes of waste every day and has a treatment capacity of just about 5,000 tpd (tonne-per-day). 70 per cent of the waste is going to the three dumpsites, Bhalawa, Okhla and Ghazipur. As these sites, have already crossed their capacity and can barely cope with the rising piles of waste, the government needed to think of some solutions quickly and so it has come up with this idea of a waste-to-energy plant. 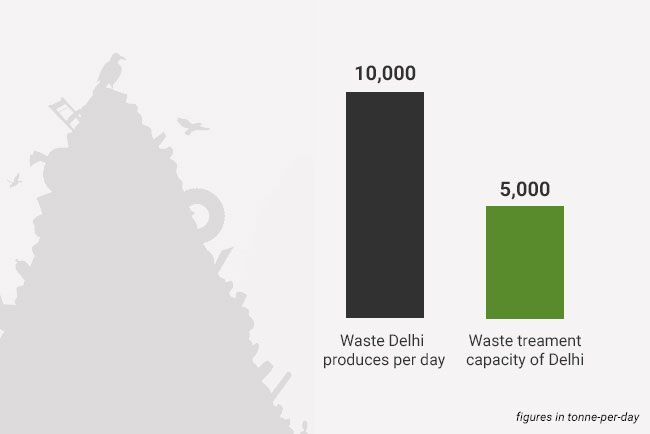 But not everyone is in favour of this plan.

Speaking to NDTV, Swati Singh Sambyal, Programme Manager of Environmental Governance (Municipal Solid Waste) in Centre for Science and Environment (CSE) says, “I personally feel that the most important issue for these plants is to show that they are not poisoning the environment and that people who live near it are safe. This requires stringent standards and enforcement. Till this matter is satisfactorily resolved, the future of waste-to-energy plants will not be bright as residents located near these facilities will continue to agitate.” She further adds, “I am not sure how successful this attempt of converting a power plant to ‘Waste-to-energy’ will be, as long as it will run on unsegregated waste, it won’t be efficient.”

How Does A Waste-to-Energy Plant Work?

The garbage collected will go to this new generation plant instead of the landfill directly and then will get burnt.

“With this as a solution, the issue of toxic pollution remains unresolved. When we burn garbage this way, there is an emission of Dioxin and Furan – they are the highly toxic environmental, persistent organic, pollutants.”

“The waste incinerators (a waste treatment process that involves the combustion of organic substances contained in waste materials) alone contribute to about 67 per cent of the total dioxins released into the atmosphere in India,” added Ms Sambyal.

She also said, India’s experience with thermal processing of waste has been poor. First generation plants have performed miserably – The Timarpur-Okhla Waste Management plant built in 1986 in Delhi shut down because of the poor quality of waste management. Many plants like that have shut down in the past or are not operational because they could not get quality waste to make fuel or had not anticipated costs of recovery in unsegregated waste, making these financially unviable.

“We are approaching  this technology as if it will vanish all the garbage like magic! But this shall not happen till the time there is a proper system for segregation of waste in our country,” felt Ms Sambyal.

Speaking on the same issue, Chitra Mukherjee, Head Of Programmes Operations at Chintan added, “The pace at which Delhi is moving, by 2021 it will start producing waste upto 14,000 metric tonnes per day. I don’t support this move at all, as they are managing the waste in a wrong way – they are burning the waste instead of recycling and compositing. It will just add on to the already ‘bad’ state of air pollution.”

But this proposal recently received the consent of the three BJP-run civic bodies during the second meeting of the inter-ministerial task force on air pollution and solid waste management.

How Should India Tackle Its Waste?

According to experts, currently India’s focus is on the use of new technologies, such as waste to energy plants. But what India should actually do is, adopt a safe and sound practice of ‘Waste Sorting.’

In India, there are nearly 15 lakh ragpickers and approximately 50,000 come from Delhi alone.  25 per cent of waste can be easily recycled if we encourage more of our ragpickers and ‘kabadiwalas.’ This way these people can come out of poverty as well and waste can be utilised to fight poverty in India.

Ms. Sambyal from CSE says, “For a waste to energy plant to be successful, segregation of waste must happen at the household or institution level and then segregated waste must be transported to the RDF (Refuse-derived fuel) plant. Only then will the quality of fuel generated by the plant will be useful and profitable.”

Ms Sambyal added, “In my opinion, India should see Sri Lanka, there segregation of waste is mandatory which is something India is missing on. There the waste plant creates a win-win situation, where it converts waste in a cost effective manner to electricity and at the same time produces bio-fertiliser (slurry), ideal for organic cultivation purposes.”

According to data, Sri Lanka currently can accommodate 1 MT of degradable waste per day and generate about 15 kWh of electric energy and 750 litres of slurry.