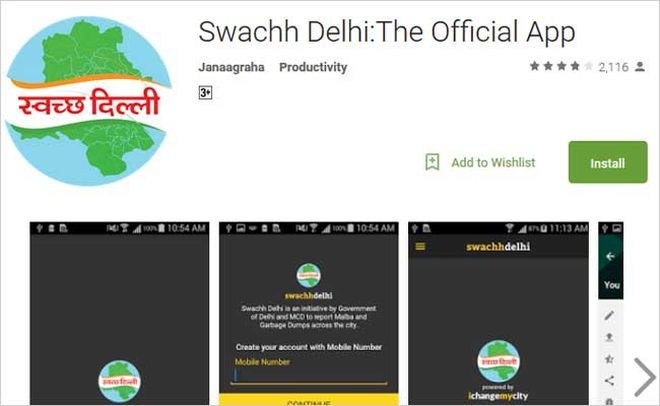 Through this app, the citizens can send photographs of any activity which directly causes air pollution.

Launching the app, Manish Sisodia said the decision was taken by the Delhi Government following a high-level meeting with Lt Governor Najeeb Jung, the central government and other stakeholders during recent meetings to tackle air pollution in the city.

“Now the people of Delhi can capture images of offending vehicles causing air pollution and other related activities like burning of leaves, plastic and old tyres, unattended garbage dumps and also construction waste.

This will be forwarded to the concerned department and teams will be immediately dispatched to resolve the problem,” said Manish Sisodia.

He also added the public’s cooperation is needed for tackling the problem of pollution at the ground level.

He said that sanitary inspectors will supervise this procedure and that’s why the app would be very useful. In fact, if any issue is not resolved properly then the sanitation inspectors will be asked for an explanation.

“A fine will be imposed on them by the sanitation inspectors which they will have to pay from their own salary. We are finalizing legalities to ensure a Sub-Divisional Magistrate oversees this entire process,” Manish Sisodia said.

Swachh Delhi App is now available on Google Play Store and it can be easily downloaded on any mobile smart phone.

The main thrust of the App is air pollution like burning of garbage and leaves, industrial and traffic pollution and dust pollution due to construction and demolition waste.

The citizen after capturing the picture of garbage/debris or any kind of activity that can lead to pollution can send to Swachh Delhi App.

The complaint will be received through registered mobile number with unique ID at the central monitoring system in the Urban Development Department and will be forwarded to the concerned agencies for immediate redressal.

From Power To Waste-to-Energy Unit: Will Rajghat Plant’s Makeover Help?