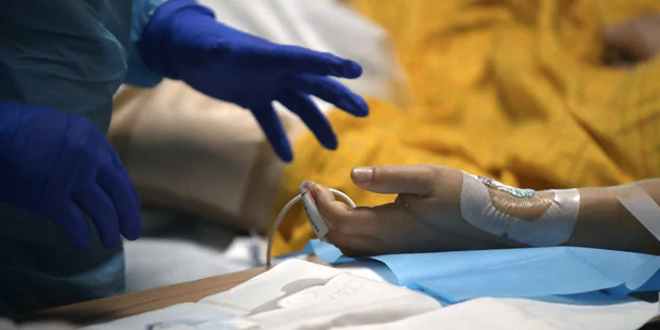 New Delhi: The second wave of the coronavirus pandemic is yet to subside, adding to the challenging times is the increasing cases of fungal infections among COVID-19 patient and those who recovered from it. Some states like Maharashtra, West Bengal, Tamil Nadu, Telangana, Rajasthan among others have declared fungal infection as a notifiable disease under the Epidemic Diseases Act, 1987. This means that whenever a case of fungal infection is diagnosed, it will have to be mandatorily notified to the respective district authority. While the country was already reporting many cases of ‘Black fungus’ among COVID cases, the recent reports of emergence of ‘White fungus’ and then a case of ‘Yellow fungus’ found in Uttar Pradesh, became a cause of concern. To learn about the recently reported ‘Yellow fungus’, NDTV spoke with Dr BP Tyagi, ENT (Ear, Nose, Throat) specialist, Columbia Asia Hospital in Ghaziabad, Uttar Pradesh; Dr Suneetha Narreddy, Infectious Disease Specialist, Apollo Health City, Hyderabad and Dr Chandrakant Lahariya, epidemiologist, public policy and health systems expert based in Delhi.

The First Case Of Yellow Fungus

While talking to NDTV, Dr Tyagi, who diagnosed the first case of yellow fungus in Ghaziabad, elaborated on the case. He said,

The 59-year-old patient who has been diagnosed with a case of yellow fungus is diabetic and had suffered from COVID-19, one month back. He was not on oxygen at all. When he was brought to the hospital, he was undergoing extreme fatigue, poor appetite with some blackish and yellowish discharges from nose. It was found that he was suffering from the case of all three- black fungus, white fungus and yellow fungus. Yellow fungus was denser and would take more time to heal.

He further said that unlike the two other infections, yellow fungus starts off internally, causes pus leakage, slow healing of wounds, and, in serious cases, can also cause devastating symptoms such as organ failure and acute necrosis (damage of tissues).

Does The Color Of Fungal Infection Matter?

Dr Narreddy and Dr Lahariya emphasised that terms like ‘Black Fungus’, ‘White Fungus’ and ‘Yellow Fungus’ can be misleading and create panic among people. These are all fungal infection called Mucormycosis, they explained. Dr Narreddy stressed that instead of focusing on the colour, it is important to analyse the infection, the reasons causing it and the risk factor. said,

All these fungal infections are Mucormycosis only. In cases where the fungus infects affects the nose, face, orbits of the eyes, and brain and lungs which causes the tissues to turn black and so people are calling it ‘Black Fungus’. When fungus attacks private parts, there is white colour discharge and thus the name white fungus. Now because of the yellow colour pus that is formed in the area wounded by the fungus, people are calling it ‘yellow fungus’. What is more important than defining these infections as per the colour of the discharge or how the body part looks is controlling the elements that is causing these infections. In most cases, it is the high glucose level in patients that may put them at high risk of fungal attack.

Also Read: Coronavirus Explained: What Is Mucormycosis Or Black Fungus And How It Affects COVID-19 Patients

More Cases Of Mucormycosis In The Second Wave

According to Dr Lahariya, over 10,000 cases of mucormycosis have been reported in the country. He said,

He added that because of the current medical emergency in the country, these cases are becoming more known to the people as a large number of people are falling sick and becoming vulnerable to the infection. Dr Narreddy said,

There were fungal infection cases during the first wave as well. I reported at least 20 cases. But since the second wave is affecting a larger population, higher cases of mucormycosis are surfacing. The use of steroids has increased in the second wave which affects the immunity of the person and thus makes them more venerable to such an infection. Another potential theory that needs to be researched is the increased use of industry oxygen. We are getting oxygen from anywhere possible but do we have the surety about quality control? This theory still needs proof. Lack of cleanliness at medical facilities is also a reason.

Causes Of The Fungal Infection

Mucormycosis is caused by mucormycetes (microscopic fungi) which grows in the environment due to poor hygiene and unsanitary conditions, said Dr Narreddy. She said,

A person gets infected when the fungus enters a person through respiration or consuming contaminated food. It becomes fatal for people with weak immunity. Fungal infections are not contagious since they cannot be spread from person to person. But it is important to know that most fungal infections of this manner start off due to unsanitary conditions- poor hygiene, contaminated food, or overuse of steroids, antibacterial medications.

Patients coping with comorbidities or using immunity-suppressing medications continue to be at a greater risk for catching the infection, she said.

Watch: Dos And Don’ts Of Using Steroids In COVID-19 Treatment

Symptoms To Watch Out For

The experts said that the symptoms of the fungal infection attacking internal organs are acute lethargy and fatigue, loss of appetite, unusual weight loss, leakage of pus should be observed. Dr Lahariya asserted that signs of fungal infections at other body parts should also be observed like facial deformity, sunken eyes, slow healing of wounds and damaged tissues. He warned that it is critical that patients seek help for their infection as soon as they start observing symptoms.

How Can The Fungal Infection Be Prevented?

According to Dr Narreddy, cleanliness is the key to prevent fungal infections. She said that the surrounding should be free of moulds. She also asserted that there should minimum use of steroids and antibiotics. She said,

In the current situation, in the raging pandemic, steroids are life savers. But these must be used in minimum doses for a minimum duration. Antibiotics should be avoided as much as possible. COVID is a viral disease and not caused by bacteria. Including antibacterial medication in COVID treatment, will only harm the good bacteria in the gut.

She recommended that if a patient has comorbidities like diabetes, then the medical professional must focus on keeping the blood sugar level in check. She said,

Diabetes along with an overdose of steroids and antibiotics is the perfect recipe for fungal infections in patients.

Dr Narreddy said that fungal infections can occur in patients even after two months of receiving the overdose of steroids and antibiotics and warned that delay in treatment can be extremely dangerous.

Also Read: COVID-19 Explainer: How Are Antibodies Formed And How Long Do They Last?

India Should Be Able To Fully Vaccinate 60 Crore People Against COVID-19 By December: Dr Naresh Trehan