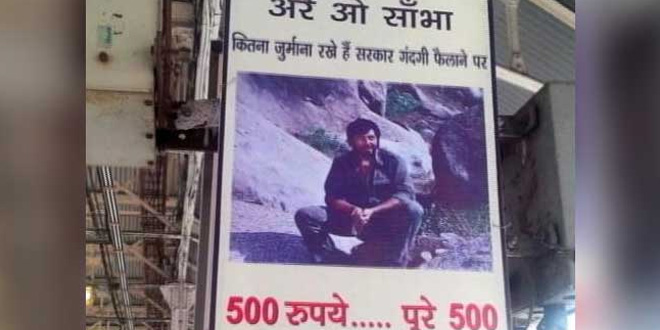 HOWRAH: Kolkata’s busy Howrah Railway station has adopted a novel approach to drive home the message of ‘Swachh Bharat’. Gone are the rather dour looking ‘Do Not Litter’ signs. Instead, the station’s walls are now dotted with posters depicting famous scenes from Bollywood hits. Even the ‘Keep Clean’ messages come with a filmy twist.

From one such poster, Amjad Khan as Gabbar glares at passengers and asks them the price on his head. In the Howrah Railway station’s version of Sholay, Samba reminds him of the price of littering instead: “A full five hundred rupees.”

The brainchild of Railways officer Badri Narayan – who holds a PhD in economics besides being a film buff – the new posters have managed to draw a lot of attention.

But there are some, who may be missing the point.

Akhilesh Singh, 50, is a farmer from Darbhanga in Jharkhand. He cannot read or write. He also claimed to have never seen a film in his entire life.

Have you heard of Amitabh Bachchan? “No,” he said.

What about Rajesh Khanna or Shah Rukh Khan? “No.”

In another such poster Rajesh Khanna philosophizes about life and the meaning of death in a scene from Anand. In the Howrah Railway station’s version he cautions babumoshai: “When, who, and where someone may litter, no one knows.”

Some complain that the railways need to keep up with the times. The millennials connect more with Ranbir Kapoor than Mr Khanna.

“It may be better to show scenes from newer releases or rope in stars, like Ranbir Kapoor or Priyanka Chopra, who will be recognised by the younger generation,” said Amit Pandey, a student.

Mr Narayan – the man behind the initiative – is not deterred.

“I am old and tried to use films and dialogues that I am familiar with. But we will also incorporate scenes from newer releases,” he said.

The new initiative has also caught the eye of Bollywood superstar Amitabh Bachchan, who encouraged the initiative by posting photos of the posters on social media.

On Sunday, during NDTV’s Cleanathon initiative, he said: “It would be wonderful if everyone got together and ensured that the cleanliness campaign was a success.”

Rivers In Europe Are Beautiful. Hope Our Country Would Learn From It: Uma Bharti